40% of US Households Report Financial Struggles in Recent Months

EDITOR'S NOTE: The financial struggle for average Americans is real in 2021. The Guardian reports that a recent NPR survey found that “nearly 40% of US households have faced serious financial problems, including struggling to afford medical care and food, in the last few months.” For households with incomes under $50,000, that number rose to 59%. These financial hardships are hitting minorities especially hard with “57% of Latinos, 56% of Black people and 50% of Native Americans [saying] they had experienced serious financial problems in the past few months, compared with 29% of white people.” This survey — which included approximately 3,600 US adults — paints a bleak picture of how real people are faring in the US economy these days.

Households struggle to afford medical care and food, with figure rising to 59% for those with income under $50,000 a year. 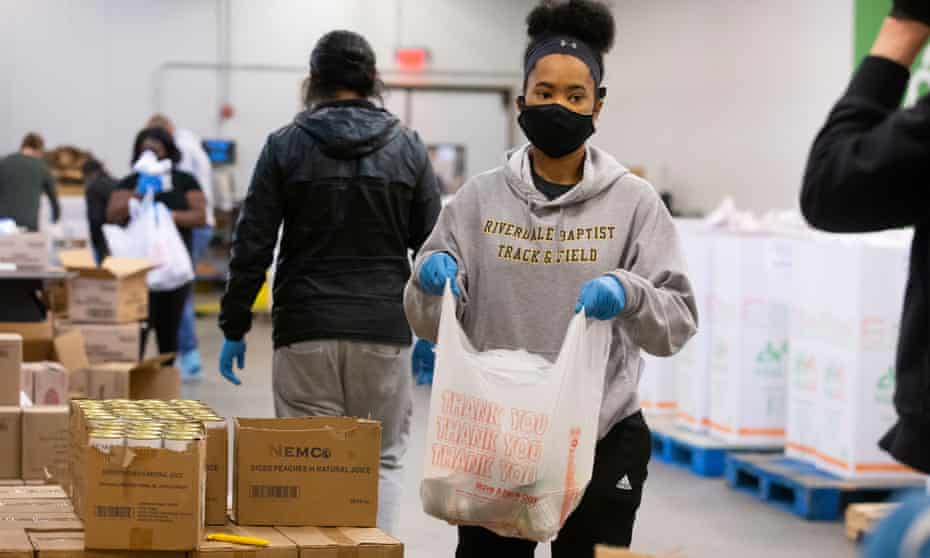 Volunteers prepare food items that will be donated to those in need at Capital Area Food Bank in Washington DC earlier this year. Photograph: Michael Reynolds/EPA

Nearly 40% of US households have faced serious financial problems, including struggling to afford medical care and food, in the last few months, according to a survey published on Tuesday.

The survey by NPR, the Robert Wood Johnson Foundation and the Harvard TH Chan School of Public Health also showed that in those last few months, as the US struggled to contain the infectious Delta coronavirus variant, the percentage of households reporting serious financial problems rose to 59% when they had an income under $50,000 a year.

Among those lower-income households, 30% said they had lost all their savings during the coronavirus pandemic.

The problems were reported despite government assistance meant to lessen the financial burden of the Covid-19 pandemic. Of households surveyed, 67% said they had received financial assistance from the government in the past few months.

The survey of roughly 3,600 US adults was conducted between 2 August and 7 September. It also found that among households with children in kindergarten through high school, 69% said their children had fallen behind because of the pandemic.

In the past few months, 17% of households reported serious problems affording medical care, including 28% of households with annual incomes below $50,000.

Originally posted on The Guardian.