A Big Driver For Investing In Gold And Silver: Safety of Funds, Physical or Digital EDITOR'S NOTE: Okay, here we go. For you chartists out there, there’s plenty here to chew on, from a multiyear cup and handle pattern to triangle formations to an inter-market analysis of the mining sector in relation to the yellow metal. There’s also plenty of fundamental information thrown into this thick stew of an article. In terms of key insights and info, Clive Maund’s article is outstanding, albeit unwittingly self-serving. But the main point is this: investing in gold and silver requires longer-term insight and timing, especially for those who want to scale their positions. There’s safety in monetary gold and silver. Not only does it provide a hedge against purchasing power declines, both are also accessible in times of electronic failure or government restrictions (something Ukrainians are having to deal with right now, as ATM withdrawals and electronic transactions have been halted). Both monetary metals also provide you with a certain level of financial privacy that can be extremely challenging (if not impossible) when dealing with electronic financial accounts. So, is it time to load up on the metals? The article below provides tactical insight on the matter.

A big additional driver for investing in gold and silver has become apparent just in recent days with it becoming clear that governments around the world, starting with Canada, are not above plundering bank accounts and online crypto wallets of anyone they consider to be renegade or even to be holding or expressing views that are not in complete conformity with government policies and agendas. The realization that this is set to happen is already translating into sharp gains in the Precious Metals sector which looks set to continue and accelerate.

Of course, the most secure form of investment at this time is physical gold and silver, but if they advance then so will gold and silver stocks and we are seeing large gold stocks that pay good dividends such as Barrick Gold and Newmont Corp starting to take off higher on strong volume in a manner which suggests that they will not be giving back their gains.

We’ll start by looking at the big picture using Larry’s long-term chart which shows that gold has been moving within a gigantic Bowl or Cup pattern following its correction back from its 2011 highs. Whilst it may be initially disconcerting to see it failing to gain traction over the past year or two when it contacted the Bowl support lines we should take into consideration that the rate of rise in 2019 and 2020 had become steep which is a reason why a “Handle” often forms to complement the Cup which serves to unwind the overbought condition resulting from the steep rise, and that is what the long consolidation from the 2020 high appears to be. Another point is that even though the price may seem to be breaking down from the Cup by moving sideways through its boundary, this is normal if a Handle forms and is not bearish – on the contrary it creates the technical setup for bigger gains. The big question then is “Will gold continue to move sideways to make a larger Handle or not?” It doesn’t look likely. Given what is now going on with mounting inflation, the prospect of war in eastern Europe and a failure of confidence in the banking system etc. it looks like gold should accelerate to the upside from here, possibly dramatically. 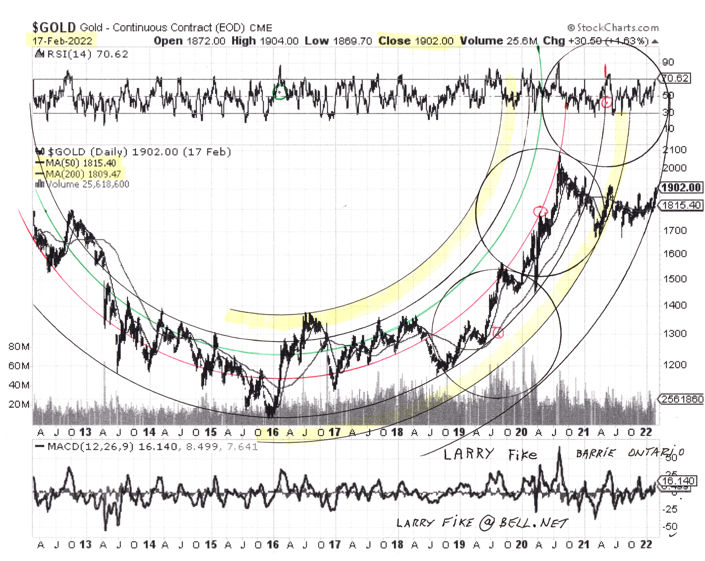 On gold’s latest 4-year chart we can see that it is already starting to break out from the large triangular consolidation pattern that formed followed its strong uptrend from the middle of 2018 to the middle of 2020. This correction was normal and it has put gold in a very good position to embark on its next major upleg which will be fuelled by a combination of mounting inflation and, as mentioned above, a collapse in confidence in other forms of investment. At the top of this chart we see the continuing strong uptrend in the Accumulation line that is alrwady making new highs, which certainly augurs well for gold gaining strong traction in the months ahead. 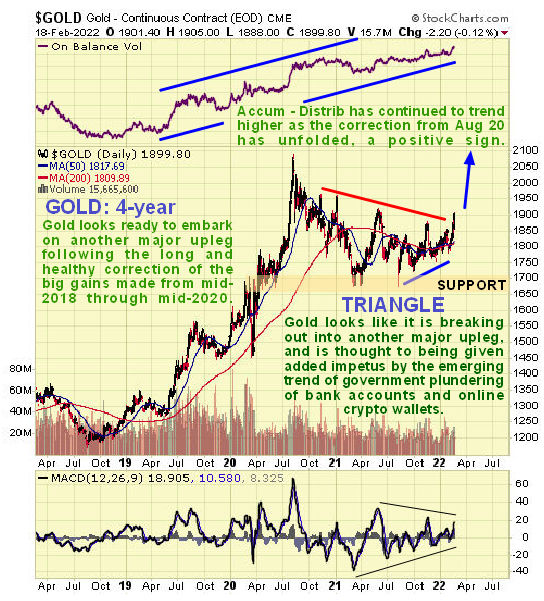 As usual, during the earliest stages of a major sector uptrend it is the large-cap high-dividend paying stocks that are the first to forge ahead, a fine example of this being Barrick Gold whose 6-month chart is shown below. 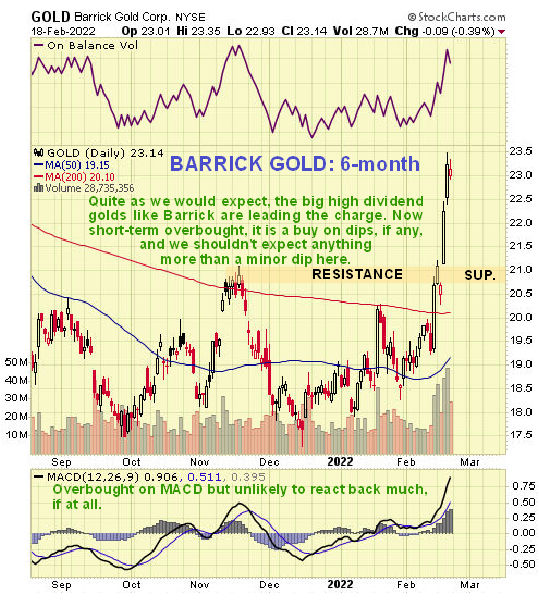 While it may look like we have “missed the boat” with some of these stocks like Barrick and Newmont because on their 6-month charts they are short-term overbought, this is not the case at all, because they are set to go much higher, as becomes obvious when you look at their longer-term charts. Large-cap gold stocks which have yet to move much but look set to include Alamos Gold, AGI, Agnico –Eagle, AEM, Harmony Gold, HMY, Seabridge Gold, SA, and Wheaton Precious Metals, WPM, which is a big silver. The charts of many of these stocks are rather similar to Harmony Gold, whose 2-year chart below serves as an example – as we can see it now looks well placed to break out of its downtrend into a new bullmarket phase. 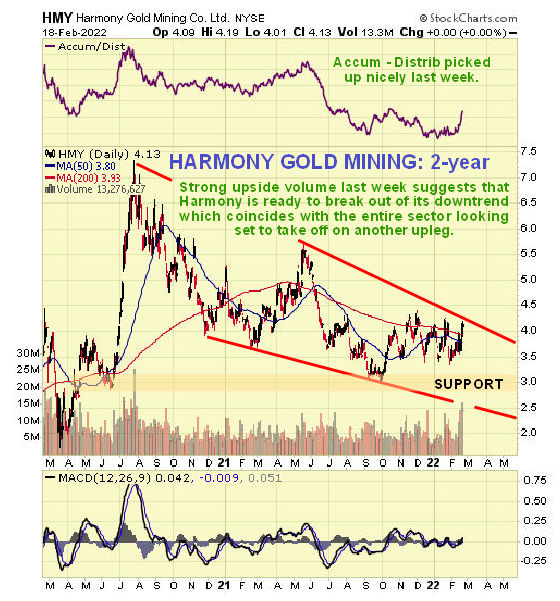 Later we will be taking an updated look at some smaller PM Stocks that are believed to be at good entry points now.