A Breakdown of The Post-Pandemic Global Economic Shift

Visualizing the inevitable: By 2030, Asian economies will likely eclipse those of western nations as China rapidly seizes the #1 spot. China moved from the fourth-largest to the second-largest economy in just five years, from 2006 to 2011. The only nation standing in its way is the good ol’ US of A. But perhaps the most surprising jump on the chart will be India, moving from the 14th largest economy in 2006 to the third-largest by 2030.

Why this is important: Although the US is projected to occupy a position second to China, the radical shift in global economic power will likely redefine the geopolitical landscape in the years to come. The old guard’s days are numbered. It’s just a matter of time before the US and other western nations have to concede to the New World Order.

The global economic shift is still a dice throw: Plenty of things can happen between now and 2030—events and developments that may either accelerate or thwart this projection. But if present conditions continue to engender future developments in a linear fashion, then the future is likely to resemble what you see on this chart. 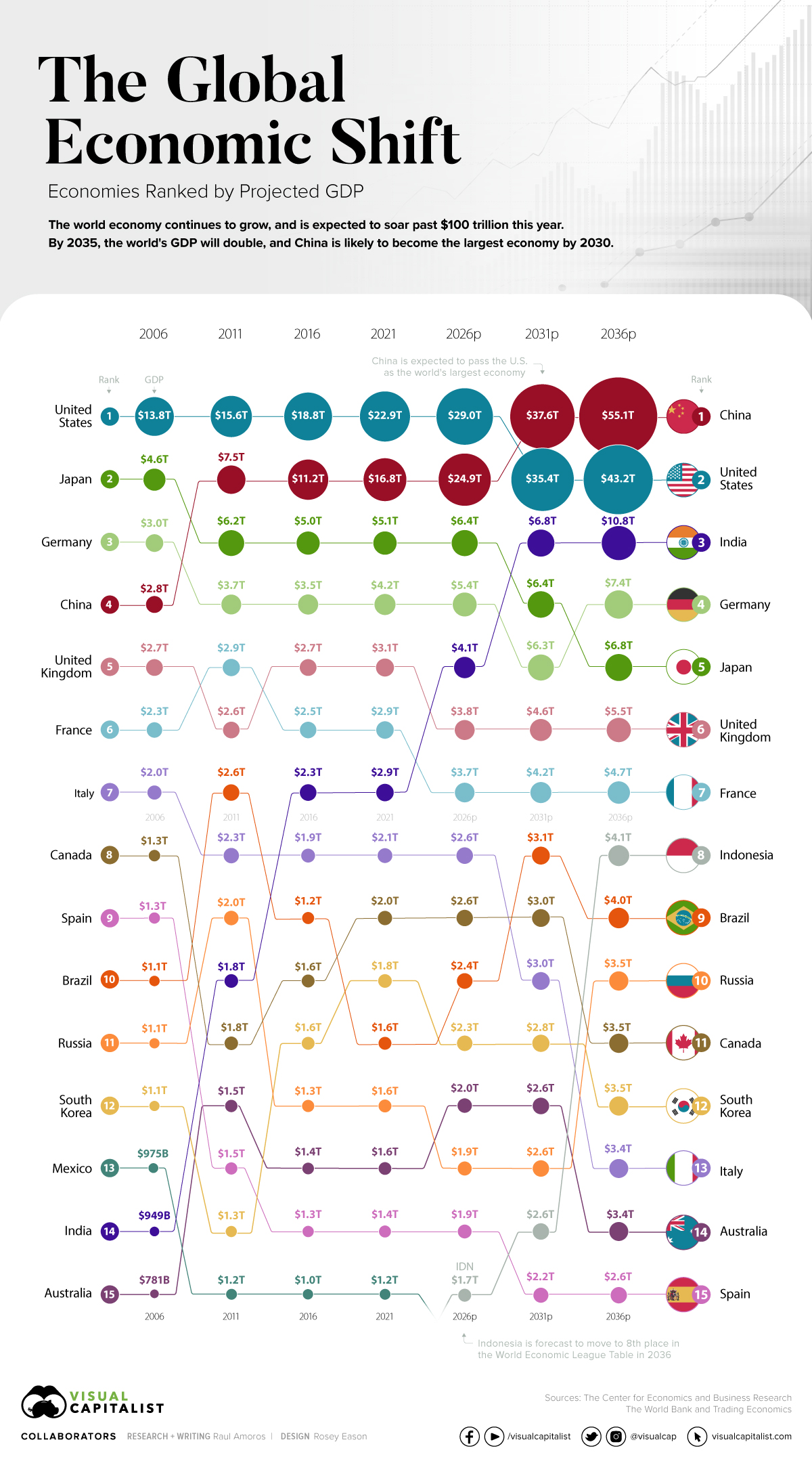 As the post-pandemic recovery chugs along, the global economy is set to see major changes in the coming decades. Most significantly, China is forecast to pass the United States to become the largest economy globally.

The world’s economic center has long been drifting from Europe and North America over to Asia. This global shift was kickstarted by lowered trade barriers and greater economic freedom, which attracted foreign direct investment (FDI). Another major driving factor was the improvements in infrastructure and communications, and a general increase in economic complexity in the region.

Our visualization uses data from the 13th edition of World Economic League Table 2022, a forecast published by the Center for Economics and Business Research (CEBR).

When Will China Become the Largest Economic Power?

China is expected to surpass the U.S. by the year 2030. A faster than expected recovery in the U.S. in 2021, and China’s struggles under the “Zero-COVID” policies have delayed the country taking the top spot by about two years.

China has maintained its positive GDP growth due to the stability provided by domestic demand. This has proven crucial in sustaining the country’s economic growth. China’s fiscal and economic policy had focused on this prior to the pandemic over fears of growing Western trade restrictions.

India is Primed for the #3 Spot

India is expected to become the third largest country in terms of GDP with $10.8 trillion projected in 2031.

Looking back, India had a GDP of just $949 billion in 2006. Fast forward to today and India’s GDP has more than tripled, reaching $3.1 trillion in 2022. Over the next 15 years, it’s expected to triple yet again. What is behind this impressive growth?

For starters, the country’s economy had a lot more room to improve than other nations. Demographics are also working in the country’s favor. While the median age in many mature economies is shooting up, India has a youthful workforce. In fact, India’s median age is a full 20 years lower than Japan, which is currently the third largest economy.

Over the last 60 years, the service industry has boomed to around 55% of India’s GDP. Telecommunications, software, and IT generate most of the revenue in this sector. IT alone produces 10% of the country’s GDP. India’s large tech-savvy, English-speaking workforce has proved attractive for international companies like Intel, Google, Meta, Microsoft, IBM, and many others, while the domestic startup scene continues to boom.

The Indian government is also pursuing “production-linked incentives” (i.e. subsidies) for multinational companies looking to diversify their production away from China. If these incentives prove successful, more of the world’s solar panels and smartphones will be produced within India’s borders.

How Will the Global Economy Look in 2031?

By the year 2031, there will be major changes in the global economic power rankings.

Out of the top five economies, three are located in Asia: China, India, and Japan⁠—a clear demonstration of how economic power is shifting towards large population centers in Asia.

Europe will have four countries in the top 10: Germany, the United Kingdom, France, and Italy. From South America, only Brazil appears in the top 10.

Under these projections, Russia sits outside the top 10 in 2031. Of course, it remains to be seen how crushing sanctions and global isolation will affect the economic trajectory of the country.

Now, the big question. Is it inevitable that China takes the top spot in the global economy as predicted by this forecast? The truth is that nothing is guaranteed. Other projections have modeled reasonable alternative scenarios for China’s economy. A debt crisis, international isolation, or a shrinking population could keep China’s economy in second place for longer than expected.