EDITOR'S NOTE: Funds, fraud, and FTX: Do you hold investments in BlackRock or Van Eck shares or any of its numerous exchange-traded funds? If so, are you aware that they and a host of other funds were exposed to the monumental FTX (cryptocurrency exchange) crash that took place this week? These institutions have lost billions in the value of their holdings. And if you hold shares in any of the smaller funds, what are the chances that the FTX crypto crash might bring a few closer to the brink of insolvency? Here’s a list of all the funds that are likely to have lost a good chunk in value. As their investors sought diversification and safety through their various ETF issuances, they instead ended up indirectly “over-concentrated” in a market that worshiped another false monetary idol.

We start at the top, where we find the "who is who" of clueless momentum chasers, who over the years somehow got confused with credible, diligent investors: we are talking of course about Tiger Global, which is down 55% this year (and is about to be down a whole lot more) and of course the fund that we once dubbed the bubble era's "short of the century", SoftBank.

Can't make this up: among the January Series C investors in FTX which valued the ponzi scheme at $32BN, were Tiger Global (down 55% YTD) and Softbank

One wonders how much of today's widespread selling across various asset classes was due to Tiger Global getting margin called and dumping what it can?

Tiger Global and Ontario Teachers’ first invested in FTX in December 2019 in a funding round that valued the company at $8 billion, according to PitchBook data. Both topped up their wagers in October 2021, giving FTX a $25 billion valuation, and did so again in January, the data show. Some of the other firms and individuals backed FTX in July 2021, paying cash to participate in a $1 billion funding round that valued the crypto exchange at $18 billion.

Prefer bullets? Here is a list of the most prominent investors in FTX courtesy of The Block's Frank Chaparro:

Remarkably, as ever more clueless pedigreed investors piled up to fund this fraud of epic proportions, the valuation went super parabolic, and after two early rounds in 2019 and 2020, FTX got its first real outside funding in July 2021 when it pocketed $900MM at a valuation of $18 billion in its Series B round; this was followed by two more rounds, the most notable of which was Series C when ts valuation exploded to a staggering $32 billion. It was around this time that Scam Bankrupt-Fraud started naming sports stadiums, and imagined a world in which FTX would buy Goldman.

The chart below is the definitive proof that even (or rather especially) the smartest investor do no homework before allocating huge amounts of capital. 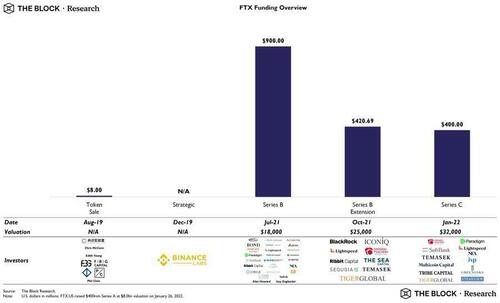 All that seems so long ago now that regulators are investigating whether FTX properly handled customer funds - translation: the firm probably used client funds from its exchange to funds its trading shop, Alameda Research - and the firm’s relationship with other entities Bankman-Fried controls, and concerns raised by Binance executives during their due diligence process could torpedo the deal.

As a result of FTX collapse, all of the abovenamed investors, among others, are set to lose all of their invested cash, especially with news such as this hitting the tape:

Still, while billions will be lost, nobody will be crushed as much as Bankman-Fried himself, whose personal wealth has collapsed from $16 billion to what may now be a negative number when accounting for his personal debt. Of course, it's all downhill from there especially once SBF is thrown in prison from stealing billions in client funds in his exchange and using them not even to buy yachts but to make catastrophically bad investments.