A Massive Week Is Ahead For The Market

EDITOR'S NOTE: Looking under the hood of today’s economy and markets can leave any non-professional observer baffled. Not only do complexities abound, the wires connecting one mechanism to another often cross, and parts intended to work in sync find themselves incompatible, short-circuiting the engines of growth. For those who are more technically-minded, this Zerohedge article delves into the convoluted mechanics of asset activity. For those of you who are not, the key concept is the “Minsky Moment.” What is it? It’s a sudden moment of major collapse brought on by reckless speculation at unsustainably high levels. In other words, it can happen at any time on the edge of the cliff that we happen to be standing on right now.

"Minsky Moments" almost certainly await, warns Nomura's Charlie McElligott in his latest note as he reflects on a massive week ahead for markets.

With Powell testimony and bunches of Fed speakers, along with US economic releases headlined by the market’s most important datapoint in the CPI release Wednesday, in addition to PPI, Retail Sales and Consumer Sentiment over the course of the week, plus two Duration-heavy auctions ($36B of 10Y and $22B 30Y, on top of tomorrow’s $52B 3Y),... and finally, US corporate earnings season kickoff (highlighted by JPM, C and WFC this upcoming Friday), it is no wonder that investors are degrossing still... 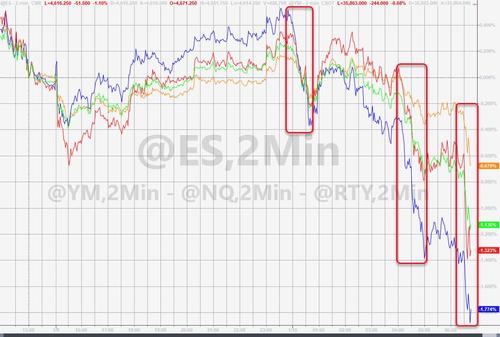 While the long-end of the curve is reversing modestly - after some more ugliness overnight - STIRs continue to grind hawkishly higher with March now consolidating around a 90% chance of a rate-hike... 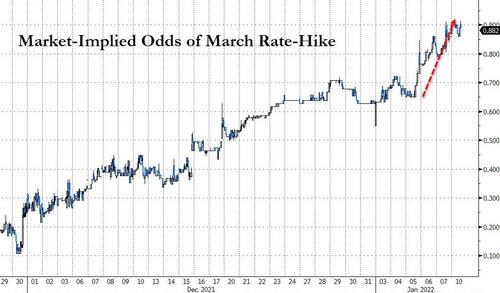 McElligott raises some worries of a rapid 'reversal' risk in bonds - via “market tantrum” forcing the Fed to yet-again “Bend the Knee” - as market positioning in bonds is extreme to say the least.

Looking at the QIS CTA Trend model to get a sense of the “bearish momentum” and asymmetry within Fixed-Income positioning, we currently see the net exposure across G10 Bonds is back to 10 year historical “extreme Short” at just 2.2%ile overall exposure since 2011; further, the aggregate $notional position across the agg G10 Bond positions is now greater that -2 SD rank (i.e. very “net Short”) dating all the way back to 2002. 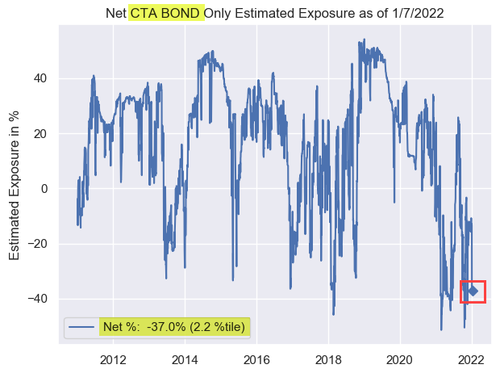 Similarly, the Nomura MD notes that eventually, the more this selloff in legacy long / crowded hyper Growth Tech extends, there is ultimately a mounting risk of a sharp counter-trend rally in beaten-down Nasdaq, particularly considering the extremely magnitude of the Dealer “short Gamma” profile in QQQ ($Gamma -$476mm, 3.4%ile since 2013 - Gamma flip line all the way up at $393.18, ref $377.30)—along with shockingly “yikes” scale of the net “negative Delta” (-$21.0B, 1.3%ile) across QQQ strikes…but for now, this “short Gamma / negative Delta” continues to press to the downside via hedging “accelerant” flows... 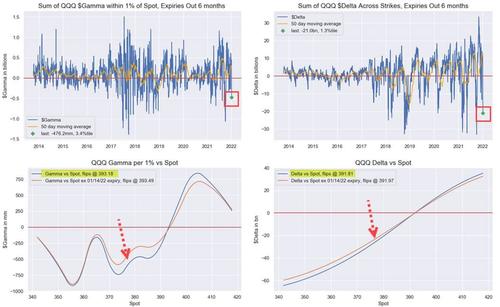 However, having said all that, McElligott says that he absolutely believes that the Fed has already “made their bed” with pretty darn clear messaging of late regarding their mandates - on their 1) acknowledgement of inflation upside risk (and it’s bipartisan politicization into a midterm election year which further “forces their hand”) and on 2) a widely-held belief that we may already be at-or-near “full employment” (only strengthening after Friday’s Jobs data) - which iterates that idea we’ve been making about the “Fed Put” now being struck SUBSTANTIALLY lower.

And that is why the Nomura strategist fears a 'Minsky Moment' awaits... as exposures accumulated and leveraged into periods of stability and low volatility then see bouts of stress on the unwind as Vol moves higher, dictating mechanical “grossing-down” of risk into a fixed-income environment where real “price-discovery” is forced via this transfer from the “Fed as buyer” backdrop, instead now into Private-Investor hands moving-forward

As shown last week via Nomura’s prior work on balance-sheet changes from Oct ’17 to Jul ’18, the “QT” impact from balance-sheet reductions does in-fact corroborate with larger asset market-movements on average the following week: in particular, following MBS- or combo MBS / UST- runoffs, showing that a “week after” dynamic of “SPX spot lower / VIX higher,” for example

Why?  The thinking is that all that “QE liquidity” sits in Bank Reserves as “regulatory capital” / HQLA- eligible assets (Reserves cannot be “lent out,” so they are primarily used to settle transactions btwn banks and / or large commercial entities as “Cash”), but also sees the “portfolio rebalancing channel” force bank Treasuries and other large Investors out onto the risk-curve (adding longer Duration and spread product like Corp IG Credit—aka “risk-assets”), as over time since the GFC, regulatory requirements have softened with the capital treatment of said risk-assets as functional “liquidity buffers” while of course too helping to surrogate loss of yield on “risk-free” assets like govies

But then as QE turns to QT and the Fed begins to unwind their balance sheet, said Excess Reserves are drained, and all this Collateral (Bonds held) needs to find a new home w/ private investors, which is simultaneously occuring alongside a reduction in the Cash side, as those Excess Reserves held in shorter-term, liquid securities go “poof”

So it’s really a crappy set-up:

“Less Cash available to help absorb more Collateral,” which is now being put back to Private Investors, as the Fed’s price-insensitive buying disappears

This is where said “mechanical” impact of the QE à QT “Cash / Collateral paradigm shift” then bleeds into other asset-classes: the cost of borrowing rises / repo rates move higher, which impacts “risk-free” benchmarks as owning government securities becomes more expensive, and this then reverberates out into risk-assets, knocking-on into widening of “spread product” like MBS & Credit, which then further (negatively) spills-over into all parts of the capital structure / securities universe.