EDITOR NOTE: Is the market currently overvalued? If not, where are we in approaching overbought levels? This is something that long-term investors are always concerned with if only to rebalance their portfolios. This includes investors like the Oracle of Omaha himself, Warren Buffett. What you’re about to read is one of the most informative analyses of the “Buffett Indicator,” which is a ratio of market cap to GDP. The author skillfully tweaks it--superimposing a substitute index (Wilshire 5000), detrending both, and applying standard deviations to compare where they stand. To give you a hint, we’re close to reaching, perhaps even exceeding, a top. It also looks like the market may run up even higher, however perilous that may be, as a result of impending monetary and fiscal actions. But like all buildings that have gravity-defying limits, the market will eventually succumb to the weight of the economy’s gravitational pull. And when that happens--which will be sooner than later--all assets that derive value from the market will come tumbling down.

Market Cap to GDP is a long-term valuation indicator that has become popular in recent years, thanks to Warren Buffett. Back in 2001, he remarked in a Fortune Magazine interview that "it is probably the best single measure of where valuations stand at any given moment."

The four valuation indicators we track in our monthly valuation overview offer a long-term perspective of well over a century. The raw data for the "Buffett indicator" only goes back as far as the middle of the 20th century. Quarterly GDP dates from 1947, and the Fed's balance sheet has quarterly updates beginning in Q4 1951. With an acknowledgment of this abbreviated timeframe, let's take a look at the plain vanilla quarterly ratio with no effort to interpolate monthly data.

The strange numerator in the chart title, NCBEILQ027S, is the FRED designation for Line 62 in the F.103 balance sheet of Table S.5.q of the 'Integrated Macroeconomic Accounts for the United States' (Market Value of Equities Outstanding), available on the Federal Reserve website. Incidentally, the numerator is the same series used for a simple calculation of the Q Ratio valuation indicator.

With the Q3 GDP Third Estimate and the December close data, we now have an updated look at the popular "Buffett Indicator" -- the ratio of corporate equities to GDP. The current reading is 176.6%, down from 174.3% the previous quarter. 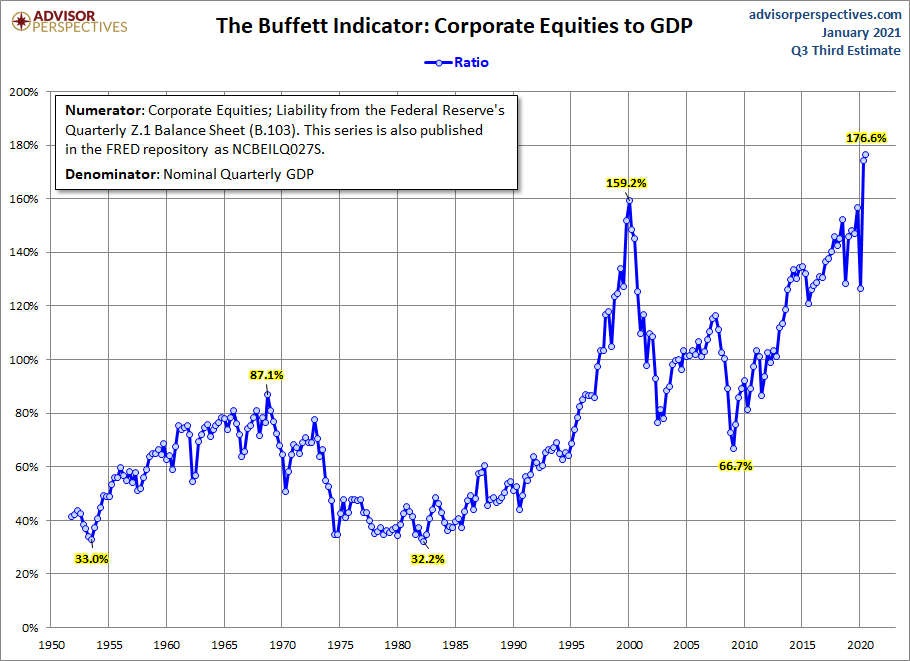 Here is a more transparent alternate snapshot over a shorter timeframe using the Wilshire 5000 Full Cap Price Index divided by GDP. We've used the St. Louis Federal Reserve's FRED repository as the source for the stock index numerator (WILL5000PRFC). The Wilshire Index is a more intuitive broad metric of the market than the Fed's rather esoteric "Nonfinancial corporate business; corporate equities; liability, Level". We've noticed some folks use lagging GDP figures to estimate the current Buffet indicator figures - in other words, people have used the current numerator and the lagging GDP figure in the calculation, which is not accurate. We have chosen to use data from the same time period (currently Q3 2020) for all series. 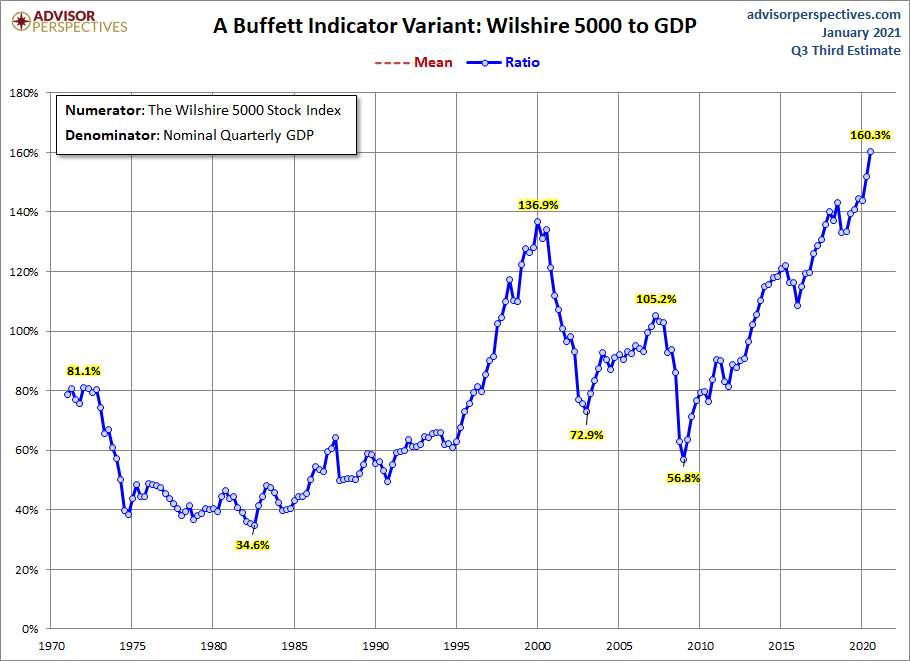 A quick technical note: To match the quarterly intervals of GDP, for the Wilshire data we've used the quarterly average of daily closes rather than quarterly closes (slightly smoothing the volatility) when the latest data is not yet available.

How Well do the Two Views Match?

The first chart above uses Fed data back to the middle of the last century for the numerator, the second uses the Wilshire 5000, the data for which only goes back to 1971. The Wilshire is the more familiar numerator, but the Fed data gives us a longer timeframe. And those early decades, when the ratio was substantially lower, have definitely impacted the trend.

To illustrate the point, here is an overlay of the two versions over the same timeframe. The one with the Fed numerator has a tad more upside volatility, but they're singing pretty much in harmony. 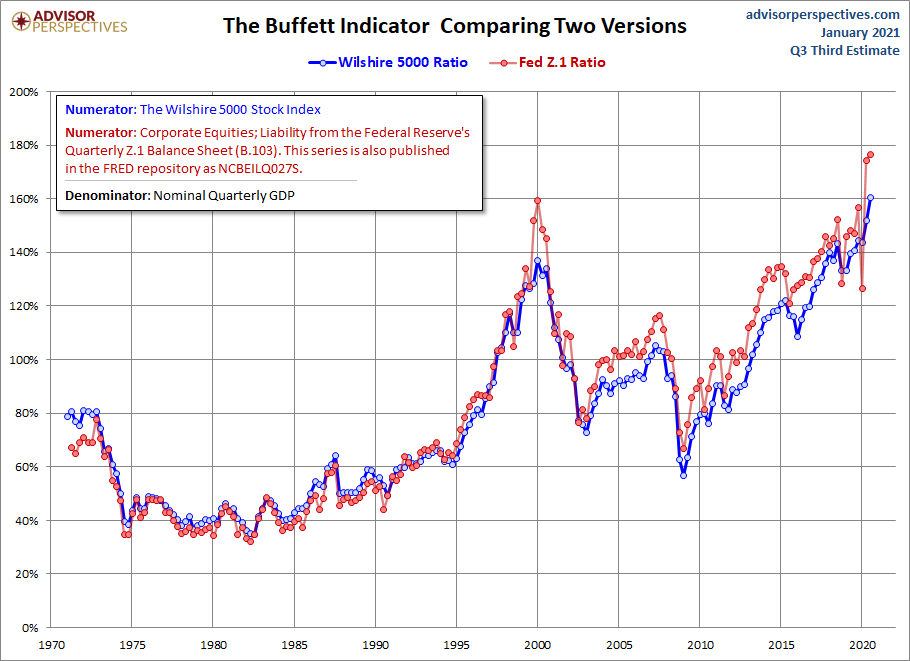 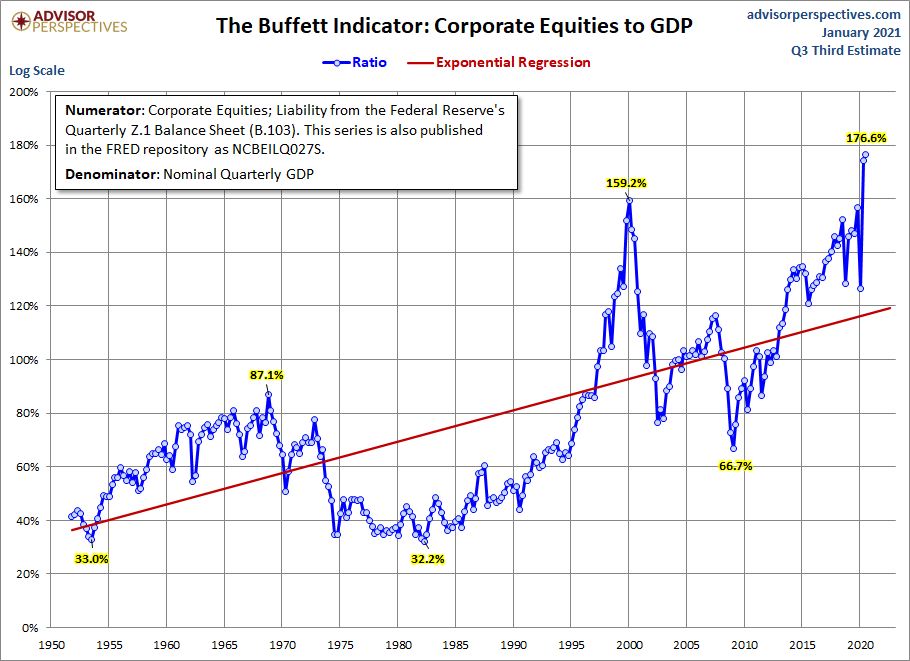 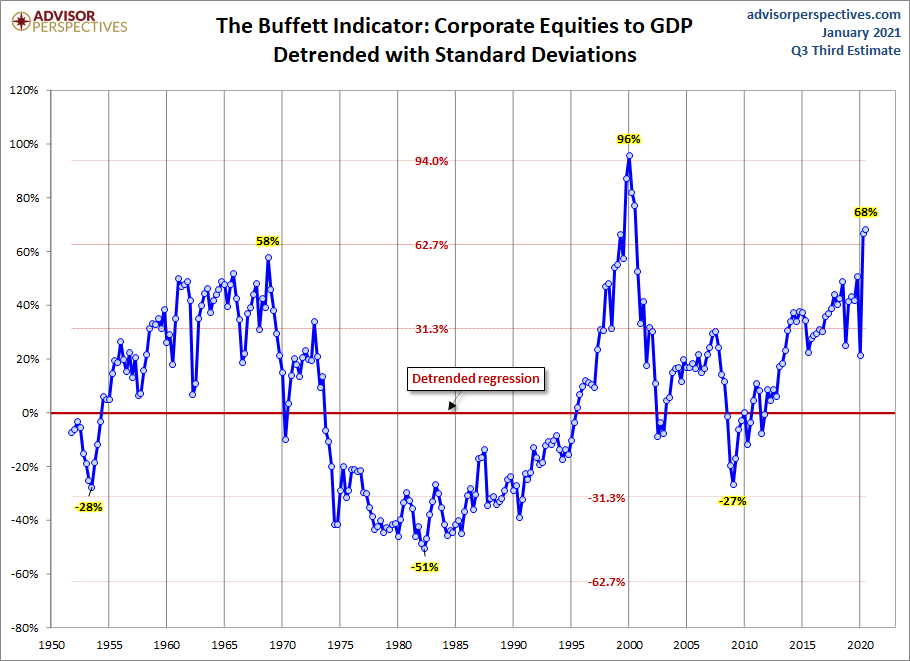 That is another question we've been asked many times. Here is the same calculation with Gross National Product as the denominator; the two versions differ very little from their Gross Domestic Product counterparts.

Here is an overlay of the two GNP versions -- again, very similar. 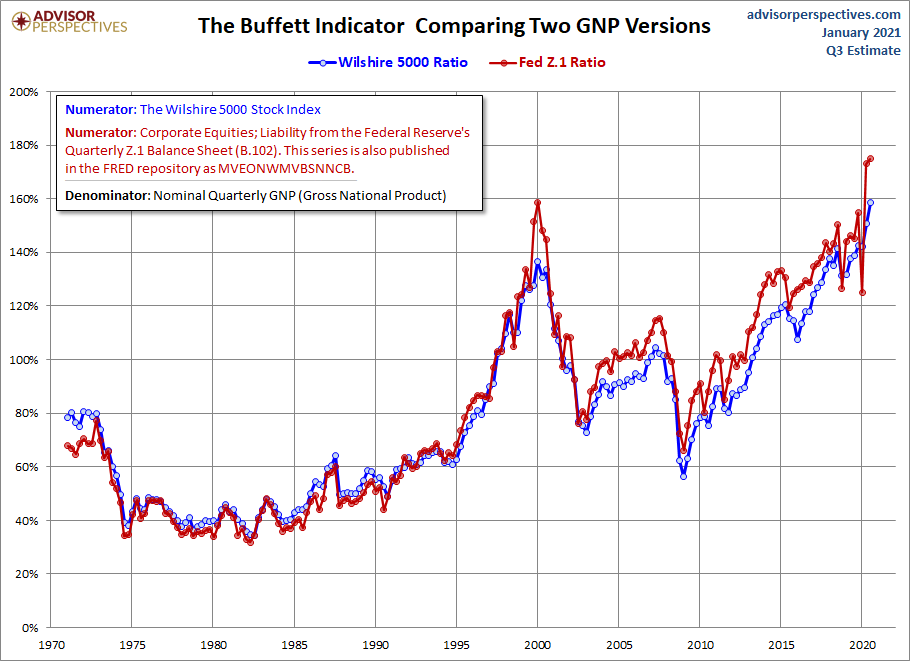 What Do These Charts Tell Us?

A question we're repeatedly asked is why we don't include the "Buffett Indicator" in the overlay of the four valuation indicators updated monthly. We've not included it for various reasons: The timeframe is so much shorter, the overlapping timeframe tells the same story, and the four-version overlay is about as visually "busy" as we're comfortable graphing.

One final comment: While this indicator is a general gauge of market valuation, it's not useful for short-term market timing, as this overlay with the S&P 500 makes clear. 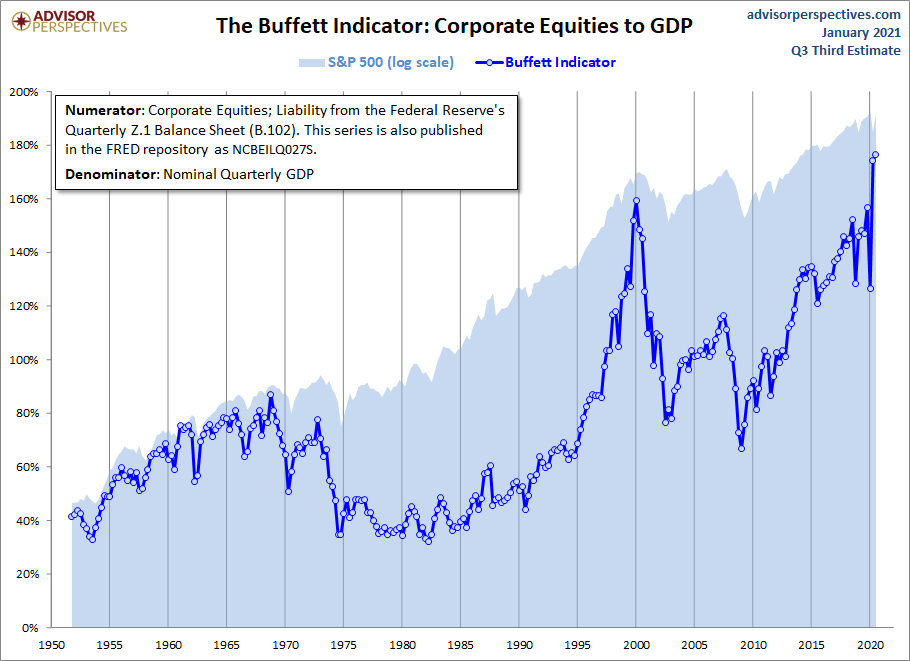