Americans Are Doing Everything They Can To Earn Extra Cash EDITOR'S NOTE: There appears to be a significant disconnect between Washington and the average American household, especially under the Biden administration, whose economic views seem to come from a space external to any semblance of economic common sense. And to this, we share some disheartening news. Did you know that there’s a growing trend of Americans (desperate for extra cash) selling their own blood to feed their families? Yes, it’s true. It also doesn’t take much empathy to see how such desperation is palpable and urgent. Bad economic news is commonplace these days; a normalized phenomenon. And what you’re about to read, as aggressively incongruous as it may seem, is becoming, sadly, another “normalized” feature of the Biden economy.

Gas, groceries, electricity, and rent -- the price of everything has soared to four-decade highs under the Biden administration. Household finances are under severe pressure as wage growth fails to outpace inflation for 18 months, leading many folks to find a second job. Even holding two jobs isn't enough to sustain the cost-of-living crisis, as some Americans are finding the nearest plasma clinic to donate blood to earn extra cash.

Cashe Lewis, 31, of Denver, Colorado, works multiple jobs and is trying to find a third job due to rising shelter inflation. She told The Guardian she works six days a week, sometimes more than 16 hours per day, just to pay the bills.

"I'm exhausted all the time ... on the one day I have off a week, I donate plasma for extra money. I'm literally selling my blood to eat because I have no choice," Lewis said.

She said many of her "friends and family work multiple jobs" as inflation makes "nothing affordable and the roadblocks set up to keep people in the cycle of poverty benefit the most wealthy members of our society."

Lewis said: "We aren't living, we're barely surviving, and we have no choice but to keep doing it."

More Americans than ever are working multiple jobs as inflation wipes out real wage growth.

Real wage growth has been negative for 18 consecutive months. 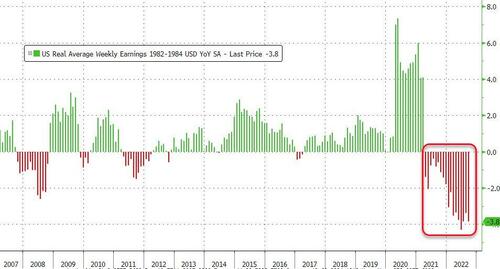 The personal savings rate has tumbled to multi-decade lows at 3.1%, just shy of the record low of 3.0%... 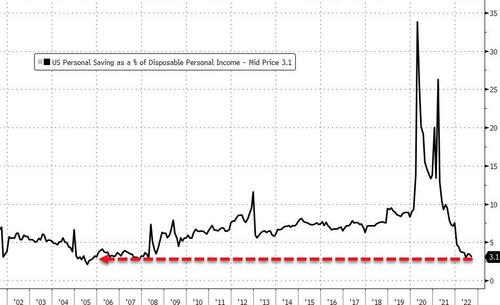 And some experts are concerned about the pace of growth in consumer credit as debt loads for households soar as their wages can't cover added costs of food, shelter, and energy.

But according to MSNBC's Joy Reid, her latest comments claim that Americans were oblivious to inflation until conservative political candidates started talking about it.

Reid's suggestion insinuates that the public was comfortably unaware of the inflationary/stagflationary crisis and could have stayed that way had it not been for those meddling Republicans and their refusal to use the "common tongue" on the campaign trail. In other words, she believes the average voter is stupid.

Voters aren't stupid, and they're going to vote with their depleted wallets on Tuesday. A recent poll found that most Americans (over 90%) now rate inflation and the economic decline as their top worry going into the midterm elections.

And it's not just Lewis who has sold her blood plasma to feed her family. Many others like her are scouring the internet for where they can donate plasma for money. 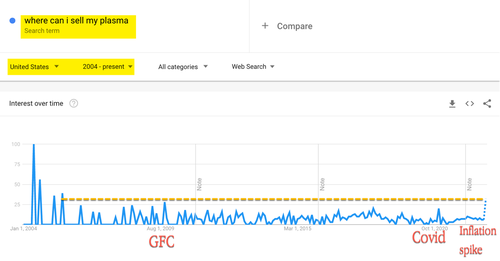 Over the summer, Fox 35 Orlando published a story titled "More people donating plasma to earn extra money amid inflation, rising costs." They interviewed Dan Hernandez, the director of Octapharma Plasma in Orlando, who said, "We have countless people coming into our facilities saying it's really hard to make ends meet."

Hernandez said the number of people donating has doubled in the last year, coinciding with the inflation spike in the economy.

"Inflation. Everybody who comes here obviously they talk to us, and they tell us that it's difficult to make ends meet," he said.

The general public knows that working multiple jobs, barely affording to live while making frequent stops at the plasma clinic just to put food on the table isn't normal. At least polling data shows many are awakening to Biden's failed policies have made their lives worse.