Are Americans Maxing Out Their Credit Cards For The Holidays?

EDITOR'S NOTE: During the holiday season of 2020, consumer spending was high, thanks to the flood of stimulus checks that came Americans’ way throughout last year. Now that the free money train has stopped, Americans are back using their credit cards, and that’s a problem this holiday season. Zero Hedge reports that “in October the growth in consumer credit dropped notably, rising by just $16.9BN, missing expectations of a $25 billion increase, and down sharply from $27.8BN in September, well below the six-month average of $23.5 billion.” As credit card pay-downs have stopped and many American’s cards reach their limit, it couldn’t have happened at a worse time as the all-important holiday retail season is in full swing.

After several months of blistering growth in consumer credit as US households charged purchases on their credit cards (as their bank accounts, fattened up by months of stimmies in 2020 which however ended in early 2021, had run dangerously dry), in October the growth in consumer credit dropped notably, rising by just $16.9BN, missing expectations of a $25 billion increase, and down sharply from $27.8BN in September, well below the six-month average of $23.5 billion. 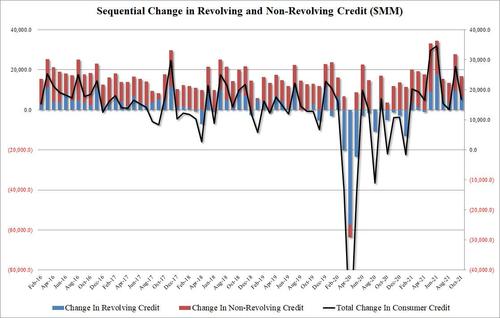 Looking at the breakdown, the weakness was spread uniformly between revolving and non-revolving credit.

As shown in the chart below, credit card debt (i.e., revolving debt) rose $6.582 billion, down from $9.8 billion the month before, and well below the record $17.7 billion hit in June. Still, we are a along way away from the record stretch of constant credit card paydowns that dominated activity in 2020. 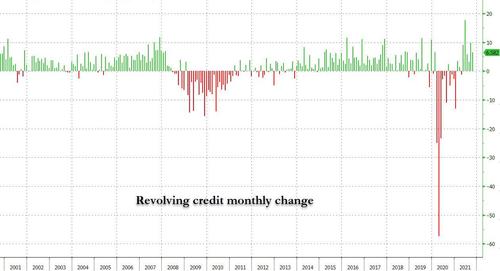 Perhaps even more than in revolving credit, there was an acute slowdown in growth in non-revolving credit as well, which rose just $10.3 billion in October, down sharply from $18.1 billion in September, and well below the recent high hit in May at $24 billion. 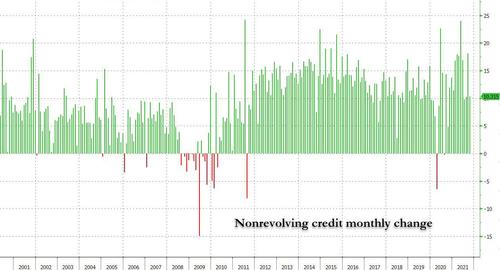 While not an imminent alert just yet, the big decline - and miss of expectations - may be the first indication that US consumers, having spent the bulk of their stimmy savings - we are talking about the middle class here, not the top 20% who pocketed more than two-thirds of all Biden stimmies...

... are getting close to maxing out just in time for the critical holiday shopping season, and may explain the ugly Black Friday and Cyber Monday spending trends observed last week.