EDITOR NOTE: If you thought Biden’s $1.9 trillion stimulus package was big, try $4 trillion. According to Goldman Sachs, that’s their estimate of the coming infrastructure package. Biden calls the current stimulus historic legislation aimed at “rebuilding the backbone of this country and giving people in this nation, working people, middle-class folks, people who built the country, a fighting chance.” Nicely said, but it’s actually a fraud on American citizens and taxpayers. A small portion of it--around $200 billion--goes to actual Covid assistance. The rest is pork that goes to the Dems’ welfare-type spending. For instance, what do funds handed over to the National Endowment of the Arts have to do with Covid-relief (as an aside, when the various art movements in 20th century Modernity flourished, it was a vital anti-bourgeois middle finger thrust that generated robust artistic, intellectual, and monetary capital--not like the frail arts nonprofits you see today that survive via welfare handouts). Anyway, enough said. The pork is evident. And if Biden sees the next $4 trillion through all the way to legislation, you can guarantee that a lot of the money you’ve worked hard to earn--and that the government took--will be wasted on liberal side projects that will yield very little return to you or the American economy.

Last Friday we published a recap of Biden's gargantuan $1.9 trillion American Rescue Plan from Rabobank's Philip Marey in which he observed that "the Democratic approach may have spoilt the mood for bipartisanship in the near term. Republicans claim that the Democrats were not serious about finding a bipartisan consensus." In short, since not a single Republican voted for the American Rescue Plan and centrist Democratic senators have shown that they are willing to use their leverage in the 50-50 Senate. "this will increasingly anger progressives as their left wing agenda continues to be watered down by senators of their own political party. Therefore, if Biden does not proceed with caution, this could already have been the high point of his administration."

That would be the rational view. Alternatively, in a world where a flood of new debt is the only option left to perpetuating a failed status quo, one can also argue that record polarization notwithstanding, it will be in the best interest of both republicans and democrats to push the current spending spree to its absurd limits.

That's where Biden's upcoming boondoggle - his infrastructure plan - comes in, and as Marey ominously predicts "if you think that $1.9 trillion is a lot of money, this does not mean that Democrats are going to stop their spending spree here." Not at all, and indeed in Marey's view, the next big thing from the Biden admin is an upcoming $2 trillion infrastructure deal (his full take here).

But according to Goldman, even $2 trillion is not nearly big enough, with the bank predicting that the BIden admin could come up with an infrastructure number as big as $4 trillion.

But first a quick post mortem from Goldman on the final Biden bill which as Goldman chief economist Jan Hatzius writes was closer to the original Biden proposal "than we expected" with the bank's forecast of a $1.5 trillion (6.8% of GDP) package, was around $350bn (1.6% ofGDP) less than what Congress ultimately approved. Exhibit 1 compares Goldman's prior expectations and the final package as estimated. Greater-than-expected fiscal support for state and local governments, transit systems and pension funds accounted for around half of the difference. 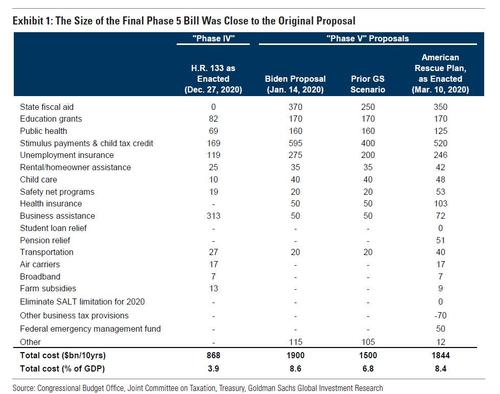 The larger than expected final Bill will also lead to a larger fiscal impulse in 2021 and especially 2022, Goldman writes. To evaluate the growth implications of the fiscal upgrade the bank updated its estimates of the impact of fiscal support on the level of GDP. These estimates, shown in Exhibit 2, incorporate the effects of some residual CARES Act measures that will be spent in 2021, the Phase 4 package, the Phase 5 package, and the UI benefit extensions, child tax credit extensions, and infrastructure spending that will be passed later this year. Goldman expects that the impact of fiscal stimulus on the level of GDP will peak between 6-7% in 2021 Q2 when the $1400 stimulus checks have their largest effect before declining for the remainder of our forecast horizon. Relative to the bank's prior fiscal assumptions, it now sexpect a much slower drop-off of support past 2023 Q3 and especially in 2022 when the increased spending in the Phase 5 fiscal package has its largest impact and the spending we expect will be passed later this year begins to be disbursed. 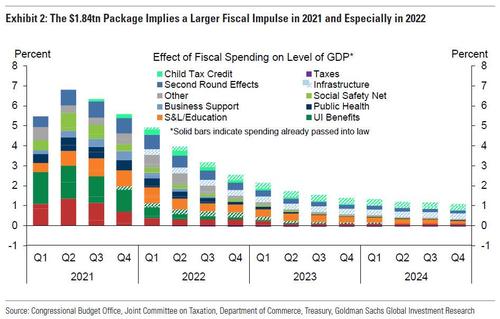 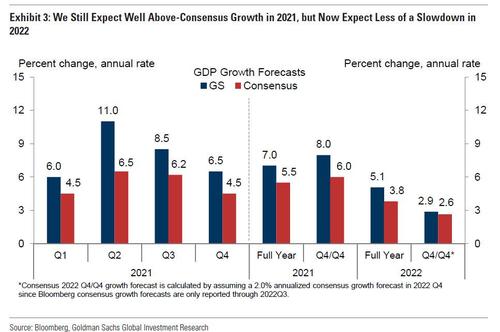 That inflation is not nearly enough to force the Fed into acting, and Goldman notes that after these forecast upgrades, the bank views the first hike in the funds rate as "a close call between the second half of 2023 and the first half of 2024."

Our working assumption has been that the Fed’s implicit core PCE inflation threshold for liftoff is 2.1%, and we now expect to reach this slightly earlier in 2023H2, which would argue for bringing forward the timing of liftoff from our standing forecast of 2024H1. However, we are increasingly unsure where FOMC participants put this threshold and we see the risks as tilted to the higher side. The summary of economic projections provided at the March FOMC meeting next week will provide insight into the FOMC’s reaction function.

Looking ahead, with the package coming in about $350BN more than Goldman's latest estimate, the bank expects this to be the last major COVID-focused fiscal relief package, even though Congress seems likely to renew some of the items in it later this year with two items in particular standing out:

Of course, as noted in the title what markets will focus on next will be Biden's infrastructure package and here size certainly matters (even though a large headline cost would likely have a much smaller near-term effect than the bill Congress just passed).

Here, Goldman expects the next round of infrastructure legislation to increase spending and tax incentives for traditional and green infrastructure by at least $2 trillion, and as Hatzius notes, "if the Biden Administration expands the bill to include other policies like expanded child care benefits, extension of the child tax credit, student debt relief or other education subsidies, and/or health insurance subsidies, the gross amount could rise to something like $4 trillion."

Huge headline aside, Goldman notes that the large numbers are not comparable to the bill Congress just passed, for three reasons.

Here an interesting tangent via Reuters: just what is considered infrastructure? The answer: Biden "hopes to expand the definition of infrastructure beyond existing transportation architecture to include items aimed at tackling climate change and its effects, echoing the $2 trillion, 10-year “Build Back Better” proposal floated during his campaign."

That includes investments in electric vehicle charging stations, zero-emission buses and zero-carbon electricity generation by 2035, and directing dollars to minority neighborhoods and contractors, part of a pledge to increase racial equity.

Democrats have signaled they want to invest billions in creating and refurbishing affordable housing in any package and expand broadband internet access to all Americans, particularly in rural communities. Nancy Pelosi said on Friday that she had directed senior Democrats to begin working with Republicans on a “big, bold and transformational infrastructure package.” Republicans and influential trade groups like the U.S. Chamber of Commerce support large-scale infrastructure spending, but not Democratic efforts to inject climate change or equality policy into a spending bill.

For those who can't wait until Biden reveals more of his "package", Goldman expects an outline of the Administration’s plans in a "few weeks." President Biden is likely to address a joint session of Congress in April, at which point he will outline plans for infrastructure and the remaining parts of the Administration’s agenda. Around this time, and certainly by May, the White House will submit a budget proposal to Congress, which should provide even more detail.

In other words, legislation looks likely to emerge in May or June. Following the rollout of the Administration’s plans, Goldman expects three steps:

First, Democratic committee chairs and other relevant Administration officials are likely to negotiate with congressional Republicans on a potential agreement. This is a necessary political step in light of the President’s stated desire to enact bipartisan legislation and the likely resistance among centrist Democrats to immediately pursuing legislation via the reconciliation process (which requires only 51 votes in the Senate). That said, it is unlikely that the entire infrastructure package can pass with bipartisan support, as Republicans seem likely to object to the size of such a package as well as rolling back parts of the 2017 tax law to pay for it. Assuming that Democrats ultimately decide to rely on only Democratic votes by using the reconciliation process, expect the first legislative step—passage of the FY2022 budget resolution that instructs the relevant committees to pass legislation that achieves specific fiscal targets—to occur in May, though the timing will depend on how long bipartisan discussions last.

It is possible that Democratic leaders could split off some infrastructure elements and pass them with bipartisan support. While most of the infrastructure package will pass via the reconciliation process, some parts might move separately. For example, the 5-year reauthorization of the federal highway/transit program (the “highway bill”) expires in September, and it would be nearly impossible for congressional Democrats to pass via reconciliation due to Senate rules. This is also an area where bipartisan cooperation has occurred in the past and seems possible again this year.

September will be the deadline for the infrastructure bill, though it could pass earlier. As noted above, the highway bill expires Sept. 30, which is likely to become a working deadline for the broader infrastructure package. If the legislative process starts in May and there are no major delays, it is conceivable that Congress could enact the package in late July or early August, ahead of the August recess. However, the more likely scenario is that the bill is enacted around September.