BIS Warns Markets Are Moving To An Insolvency Phase

EDITOR NOTE: The Bank for International Settlements (BIS)--also known as the central bank to all central banks--issued a stark warning. The pandemic may have created a liquidity crisis early on, but now we’re facing a potential solvency crisis. The BIS is trying to get central banks to rein-in their loose monetary policy efforts toward a more “orthodox” approach. Asset prices and credit markets are stretched, highly leveraged, and far beyond their underlying economic conditions. Investor sentiment is near 100%; pure optimistic exuberance. In short, the entire world is sitting on a financial cliff, and it won’t take much to push it over the edge. Furthermore, in their 147 page "Quarterly Report," they reveal that the US Dollars value is a danger to emerging market economies (EME) and needs to fall for the good of the global economy (see page 26). They highlight the US dollar depreciation, which was especially noticeable via China's currency, the Renminbi, which continued its trend appreciation that began in May 2020.

There are three certainties in life: death, taxes and the BIS - the central banks' central bank - warning about excesses from monetary policy (the most recent amusing example of this was last October when as we wrote, "Fed Announces QE4 One Day After BIS Warns QE Has Broken The Market"). Actually, to this list of 3 certainties we can add one more: central banks roundly ignoring the warnings from the central bank mothership.

That, however, does not prevent the BIS from continuing this trend of warnings, and today the Basel-based organization did just that when in its Quarterly Review publication it cautioned that the surge in financial markets following COVID-19 vaccine breakthroughs and the U.S. election has left asset prices increasingly stretched.

Sounding surprisingly similar to Goldman, which as we reported earlier today issued an almost identical warning, when it observed that its sentiment indicator is now +2.0 standard deviations above average... 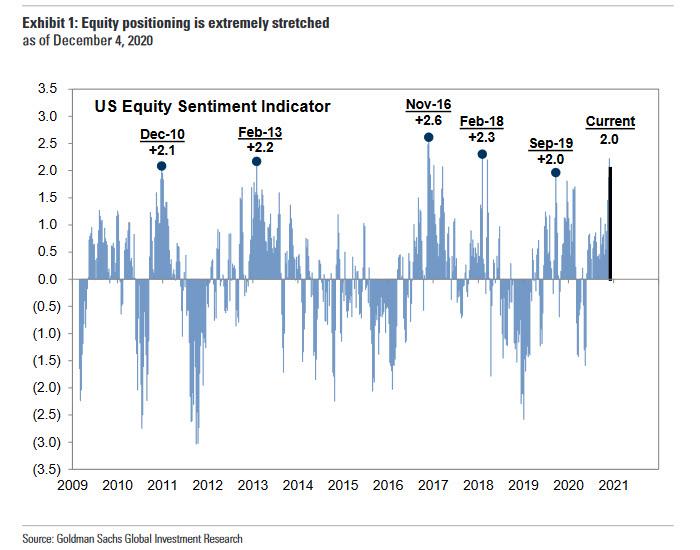 ... which has left positioning extremely stretched and represents a 98th percentile reading since 2009... 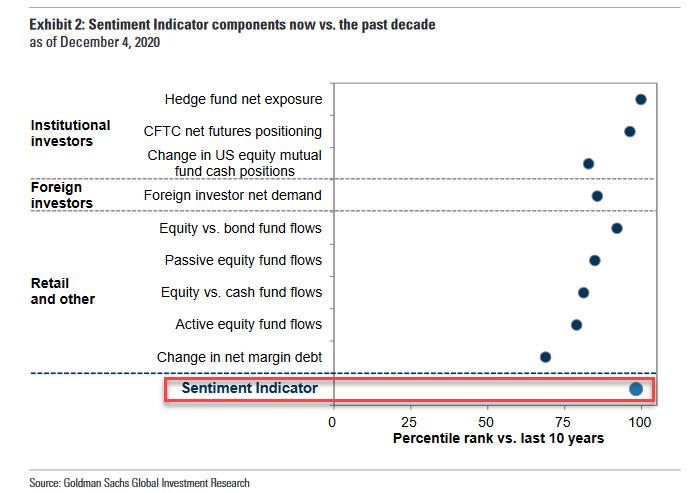 ... the BIS' quarterly report on Monday noted how credit markets and some of world’s biggest stock markets had surpassed their pre-pandemic levels despite the significant degree of uncertainty that still remains over the pandemic as it continues to spread.

The BIS' perpetual skeptic, Claudio Borio, who is also Head of the BIS Monetary and Economic Department, said a rally had been justified by the vaccine news and ongoing fiscal and monetary stimulus, but there were also signs of an overshoot.

"A certain amount of daylight between risky asset valuations and economic prospects appears to persist," Borio said diplomatically in his latest warning that markets and equities are disconnected, adding that "questions about overstretched valuations" had already been present before the coronavirus crisis.

As regular readers know, the views of the Basel-based BIS - which was profiled here in 2015 in "Meet The Secretive Group That Runs The World" - are often watched by economists as the world’s top central bankers take part in its behind-closed-doors meetings. They are then summarily ignored because whereas the BIS has been preaching a return to monetary orthodoxy for the past decade, that is no longer possible for central banks which have boldly entered the global Minsky Moment with helicopter money in tow.

In any case, Borio said one of the developments it was particularly wary of was the rapid easing of stress in corporate credit markets, which recently culminated in record low junk bond yields, a paradox considering that corporate leverage hit record highs, yet perfectly understandable in light of the Fed's backstop of the entire corporate bond market. 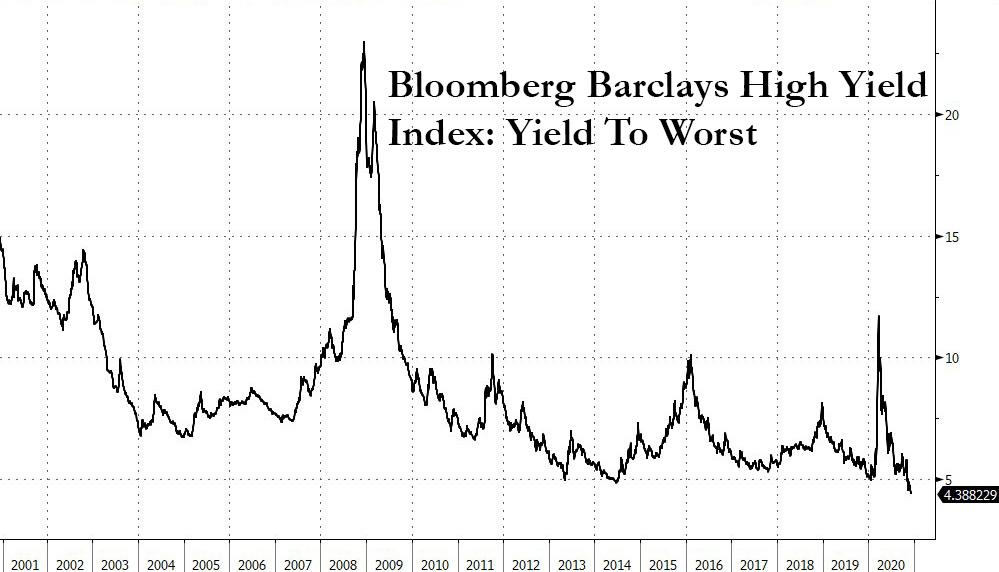 And in a dire warning that got virtually no airplay today, Borio made the following stunning announcement to reporters. "We are moving from the liquidity to the solvency phase of the crisis."

Translation: it's about to get much worse, only because central banks will ignore all the warnings, they will double down on the same failed policies, pushing leverage to even record-er highs, yields to even record-er lows, and sparking a propagation of zombies the likes of which have never before been seen.

"We should be expecting more bankruptcies going forward yet credit spreads are quite low by historical standards, and indeed while banks are pricing risk more carefully we don’t see the same in capital markets."

One almost sensed the futility in Borio's comments when he said that with $17.5 trillion worth of bonds now carrying negative yields many money managers were being pushed into riskier and riskier assets. 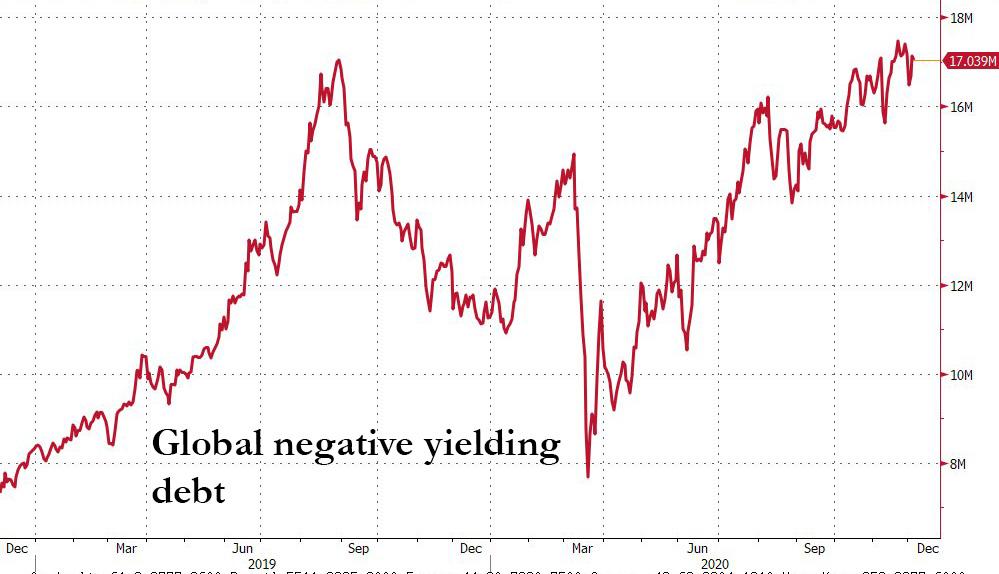 Well, WHOSE FAULT IS THAT MR CHIEF HEAD OF THE MONETARY DEPARTMENT AT THE CENTRAL BANKS' CENTRAL BANK?

Of course, Bortio wouldn't bring himself to admitting that the very same central banks he is "supposed" to advise are ignoring his warnings and recommendations - and are instead flooding the market with trillions in stimulus which does not flow into the economy but merely makes asset holders richer beyond their wildest imagination - as that would mean that someone, clearly not the BIS, is now in charge of monetary and economic advice at central banks.

Which also means that the BIS is no longer relevant, having been upstaged by its constituent members.

Maybe for his next quarterly report, Borio and his BIS colleagues can write a lengthy report discussing just who or what is now in control of global monetary policy, because the BIS' track record has merely devolved to publishing quarterly warning after warning that everyone now openly ignores and flaunts.

In his parting words absolution to the helicopter money insanity that has taken over, Borio had no choice but to admit that - despite his misgivings - he has to side with the central banks: "The outlook is rather uncertain and you would rather err on the side of doing too much as opposed to doing too little."

Brilliant... just ignore that the entire world is now on the verge of a financial cliff where the next crash will not only wipe away hundreds of trillions in wealth and destroy confidence in central banks and fiat money, but abolish the voodoo "science" that is modern economics that keeps people like Borio employed.

It will be for the best.