EDITOR'S NOTE: It appears that the case for Bitcoin (BTC) as a store of value and safe haven—aka, “digital gold”—continues to prove false as fears of inflation continue to intensify. The recent report from Coindesk shows the negative correlation between PAXG, a gold-backed digital token, and Bitcoin. The details in the article below show you how one moves opposite the other (aka, negative correlation). Of course, the editors at Coindesk could have looked at BTC’s correlation with gold going back for a period of years. The two have never shown any meaningful correlation. What BTC offered during its epic rise was positive volatility that some mistook as a countermovement to stocks; hence, a safe haven. But it’s a haven of hype; a monetary shelter by meme. And ultimately, its stand against the tides of economic uncertainty didn’t float for very long. Perhaps the short-term traders got it right, as it’s looking more like an exceptional “risk asset” for speculating on outsized swings, high or low. But a safe haven it is not, no matter how you spin the evidence at hand.

Bitcoin's inverse correlation with PAXG represents the leading cryptocurrency's recent behavior as a risk asset rather than a store of value.

The case for adopting bitcoin (BTC) as an inflation hedge, an asset that holds value and preserves the purchasing power of the money invested, is weakening with each passing week.

The correlation flipped in February just as stagflation talks began doing the rounds and the U.S. Federal Reserve pledged to fight the dreaded high inflation-low growth situation with interest rate hikes. A reading of 1 indicates that the two assets or variables are moving in lockstep, while -1 implies the two are inversely correlated.

"This reflects BTC's increasing correlation with macro stock indices as well as its recent behavior as a risk asset rather than a store of value, and points to price turbulence ahead as markets digest the impact of further inflation and liquidity withdrawals," said Noelle Acheson, head of market insights at CoinDesk sister company Genesis Global.

Bitcoin proponents have long hailed the cryptocurrency as an inflation hedge thanks to its maximum supply cap of 21 million and programmed reduction in the pace of supply expansion every four years. However, bitcoin isn't living up to its reputation as digital gold despite inflation reaching a four-decade high this year. The cryptocurrency has dropped 12% this year, while PAXG and gold have gained over 4%. 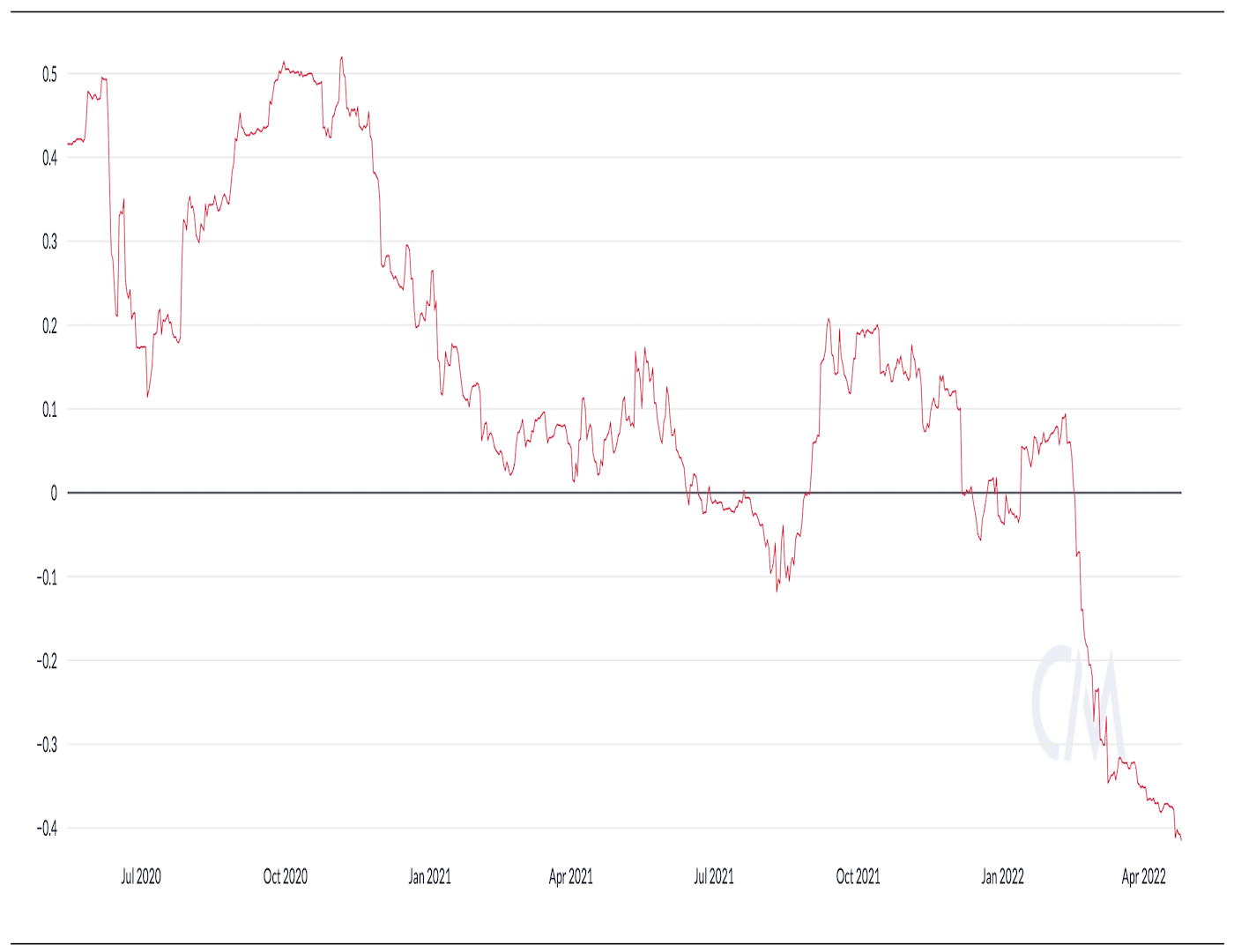 Investment demand for gold, a classic store of value asset, and products tied to gold has picked up amid the inflation scare and geopolitical tensions. According to a report by Fund Selector Asia, exchange-traded funds have purchased over 100 tons of gold since March.

PAXG's market capitalization has nearly doubled to $613 million this year, according to CoinGecko. Tether gold (XAUT), the second-largest gold-backed token, has seen its market value rise by 55% to $472 million.

Data tracked by ByteTree shows bitcoin exchange-traded funds and exchange-traded products listed across Europe and in Canada and U.S. have bled over 11,000 BTC this month, pretty much reversing the March inflows.

While bitcoin is falling behind in an inflationary environment, it may be too early to call it a failed inflation hedge. Perhaps bitcoin's utility goes beyond prices, determined mainly by short-term traders.

"Labeling bitcoin a risk asset and a failed safe haven based on price performance is incorrect – it covers just part of what's going on in the bitcoin market," Acheson told CoinDesk in a Telegram chat. "While price is a key indicator of market sentiment, it is largely driven by short-term traders and does not reflect the growing awareness of BTC's value as a seizure-resistant store of value and strong HODLing behavior we see through on-chain data."