EDITOR NOTE: The market is a dynamic beast. JP Morgan realizes this, having changed its overly-optimistic S&P 500 price target of 4,500 to a downgraded “neutral.” The bank also called an end to the Bitcoin rally a while back. So far, that isn’t happening. So, what “is” happening, and why the U-turn? That part’s pretty easy to guess--too many variables in the mix make for unreliable forecasts. The biggest variable is the most certain: the pandemic itself. Want to know where the economy is heading? Don’t pay attention to politics, market performance, and certainly not market sentiment or pundit forecasts. Pay attention to the course of the pandemic, vaccine distribution progress, and monetary and fiscal actions--all still variable, in terms of where we stand right now.

JPMorgan may have been wrong recently calling for an end to the rally in bitcoin (the cryptocurrency just hit a new all time high today), but it was correct in urging the bank's clients to buy US equities, and especially to rotate out of growth and into value at the start of November, a month which saw a tremendous outperformance of beaten-down value and small cap names over the former tech and FAAMG meca-cap leaders.

Which is why today's report laying out the bank's 2021 Outlook report was especially notable: in it, for the first time in years, JPMorgan's Croatian chief equity strategist Mislav Matejka cut his opinion of US stocks, downgrading the US to neutral while upgrading Europe to Overweight.

What is remarkable about this U-turn is that the downgrade takes place just three weeks after that "other" JPM strategist, Dubravko Lakos-Bujas, who also happens to Croatian (incidentally, so does Marko Kolanovic) upped his 2021 year-end S&P price target to as much as 4,500. So... on one hand stocks will soar almost 1,000 points, on the other hand, they are no longer worth of an Overweight reco.

Maybe this is more than just some self-serving CYA backstop plan, and it actually somehow does makes sense. Let's see what Matjeka writes in his investment summary:

We believe that 2021 will witness a stabilization in a number of dislocations that were in force this year. We advised to add risk just ahead of the US elections, and see the recent encouraging market momentum carrying over into next year. We look for positive equity returns in 2021, with target upside of 15%, driven by a strong rebound in earnings, from what are very depressed levels. P/E multiples might hold on to most of their rerating, as bond yields are not expected to move significantly higher. Monetary policy should remain supportive, trade uncertainty could ease and the fiscal stimulus will likely continue to be rolled out.

Our consistent view during the initial stages of the recovery was that the market leadership would remain very polarized, with Growth beating Value, as bond yields stay stuck. We turned bullish on Value at the start of November, ahead of the US elections, and think that the broadening in market participation will extend into 2021.

In other words, JPM's entire thesis is that despite a continuation and acceleration of the rotation out of growth and into value, stocks will maintain their upward momentum, which explains the "up to 4,500" price target on the S&P500, and also explains why US stocks were just downgraded to Neutral, just in case this rotation does not take place as smoothly as JPMorgan expects.

In any case, Matejka writes that when looking at the relative performance of value and growth, the starting point is still extreme: "The Growth vs Value run that took place up to Nov 2020 dwarfs anything seen before, at least looking at the last 50 years of data." And while tech continues to screen well fundamentally, JPM points out something rather ominous: as shown in the chart below, "a significant gap has opened up between its superb performance, up as much as 33% ytd, and the stalling relative EPS revisions." 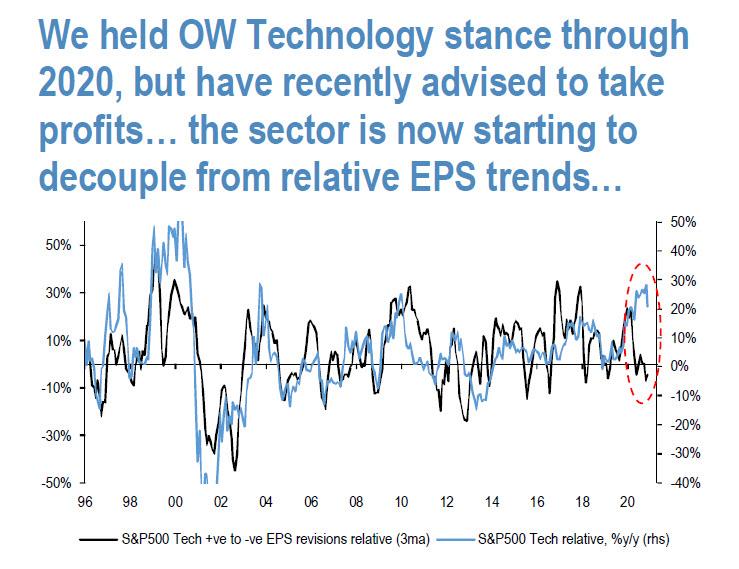 On the other side, banks have had a dismal year, down as much as 40% ytd as of end October. And even though Euro Banks are up a big 33% mtd, the JPM strategist argues that "they continue to show attractive valuations, Banks earnings are stabilizing, dividends could come back, credit spreads are holding in well, balance sheets do not need to be diluted this time around, and any move up in bond yields could result in multiple expansion", according to Matejka who is right... the only problem is that the "move up in bond yields" will also lead to a sharp drop in the same tech names which made this year's tremendous levitation from the March lows possible.

Looking around the globe, the Croat observes similar decouplings and writes that Eurozone and EM ex Asia have lagged US and China significantly this year and "there is scope for narrowing in these performance spreads."

As a result, while JPM held a preference for the US vs Eurozone, and for China vs EM ex Asia, the bank now advises clients "to position for rotation. We recently moved EM vs DM to OW, and now we take profits on US-Eurozone trade. We upgrade Eurozone to OW, and reduce US to Neutral."

So what to make out of all this? Well, we leave it to readers to make up their own mind, but we find it bizarre that exactly three weeks after another Croatian strategist at JPMorgan said that this is "market nirvana"...

"We view a confirmed Biden victory with a likely legislative gridlock as a goldilocks outcome for equities, a “market nirvana” scenario. With an even balance of power in the legislature, major tax increases and regulatory changes will be difficult to pass, while at least some easing of the global trade war should be expected. Global central bank policy remains very supportive (rates to remain at zero with ongoing QE)....

... which prompted the bank to aggressively hike its S&P price targets, and as of Nov 9 saw the S&P 500 surpassing its previous, September price target of 3,600 before year-end and reaching 4,000 by early next year, "with a good potential for the market to move even higher (~4,500) by the end of next year", JPMorgan now tells the very same clients it dragged into buying stocks at fresh all time highs that it no longer has US stocks Overweight and is downgrading the US equity market instead.

We hope that at least someone made their bonus with this trade recommendation mess.

But what will be the punchline is when some "other" JPM Croat decides to come out in a few days (never on a downtick in the S&P as we all know) and having failed to even read his colleague's downgrade of US stocks, voices euphoria for US stocks all over again and tries to herd anyone who still cares back into the US equity market where a no matter what happens, JPM will be proven right: stocks surge and the bank can point to its 4,500 price target; stocks tumble and the bank will tell clients "well, that's why we cut US stocks."

Because that's how Wall Street works.