EDITOR NOTE: BlackRock just repositioned its model portfolios, sending $1.4 billion to an inflation-protected (TIPS) ETF. For months, business leaders have been pricing in their expectations of rising input costs. Following a series of record-level inflation reports evidenced by a steep rise in certain goods and services, investors are now responding to what, a year ago, could have been predicted if they were simply following the money supply. BlackRock’s move signals weakening confidence in the Fed’s prediction that the current surge in prices will unfold as a temporary phenomenon. The investment firm is hedging the likelihood that inflation will be persistent, and quite possibly that it will get much worse. While some investors seek safety in financial products issued by the very institutions that originated the inflationary problem in the first place, others seek safety in non-CUSIP physical precious metals, traditional safe-haven assets that have proven their robustness for at least 2,000 years.

A tweak to BlackRock Inc.’s model portfolios has triggered a record inflow for the biggest exchange-traded fund protecting investors from inflation.

In an emailed statement, BlackRock confirmed it recently made some asset allocation changes to reposition its model portfolios for inflation protection and adjusting sector exposures.

“Following this rebalance, some ETFs included in the model portfolios experienced inflows and outflows, driven by advisors who choose to manage and trade their clients’ portfolios in line with BlackRock’s models,” it said. 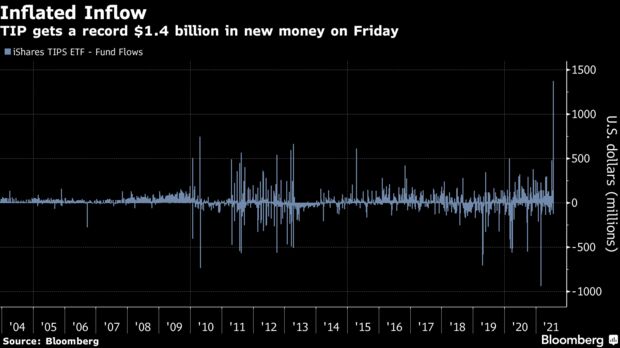 For the industry, it’s a stark reminder of the growing power wielded by models, off-the-shelf investment strategies usually comprised of bundles of ETFs. They’re a cheap and easy way to invest that’s proving hugely popular with both advisers and their clients, so much so that they now contain trillions of dollars. That raises the risk of unexpected moves if a major strategy gets tweaked.

Meanwhile, the shift is also a reflection of the inflationary debate currently shaping markets. As concern over a coronavirus resurgence casts a cloud over the global economic outlook, Treasuries have climbed. U.S. real yields plunged to a record low on Monday, even as a report this week is forecast to show the economy grew at an annualized 8.5% pace in the second quarter.

Although breakeven inflation expectations have stalled out, price pressures are poised to build from here as the Federal Reserve stays sidelined, according to Mizuho International Plc.

“U.S. breakevens are going to go quite a bit higher,” said Peter Chatwell, Mizuho’s head of multi-asset strategy. “The market continues to underestimate how much the Fed’s reaction function has changed, and the amount of inflation they will be forced to tolerate to avoid derailing the recovery.”