EDITOR NOTE: Is it possible, as BofA’s data represents a microcosm of American investments, that a large majority of people were actually positioned for “permanent growth” amid transitory inflation? As the saying goes, “if it’s too good to be true…” and you know how that ends. Apparently, the Fed, at the least, had to signal that it does, turning its stance from dovish to hawkish. Yet still, some experts are worried that the Fed may lose control of inflation’s trajectory resulting in market breakdown. Today, the core personal consumption expenditure price index--a key inflation indicator--shows rose 0.5% in May, bumping up the year over year reading to around 3.9%. In the opinion of many large investment banks (like Nomura), America is the most vulnerable to a major financial crisis, and yet the Fed finds all of the same data (what other banks deem damning) as positive news pointing to economic growth, pointing to a plan that was expecting it all along. Are we being gaslighted here or just misled by poor illumination? Either way, the smartest position to take is to diversify your return sources for the long term by always holding a permanent allocation of your portfolio in sound money, specifically non-CUSIP gold, and silver; both hedges and both growth drivers.

Many were shocked by the Fed's hawkish reversal (which was misconstrued on Thursday as dovish so Powell unleashed the Powell to make it abundantly clear just what the Fed's thoughts on inflation are), but not BofA's CIO Michael Hartnett who had long been warning that the Fed risks not only being behind the curve but losing control of inflation altogether if it did or said nothing on Wednesday, and so he was entitled a victory lap of sorts in his latest Flow Show report, in which he writes that just as "BofA FMS investors were bullishly positioned for permanent growth, transitory inflation, peaceful Fed via longs in commodities, cyclicals & financials into June FOMC" when the Fed pulled the rug from under them.

In Hartnett's post-mortem, the BofA strategist writes that the Fed "flipped from dovish to hawkish" conceding what should be obvious to anyone with a somewhat functioning brain, that zero rates and $4BN of asset purchases every day are incompatible with

a. stocks/bonds/housing prices at all-time highs, 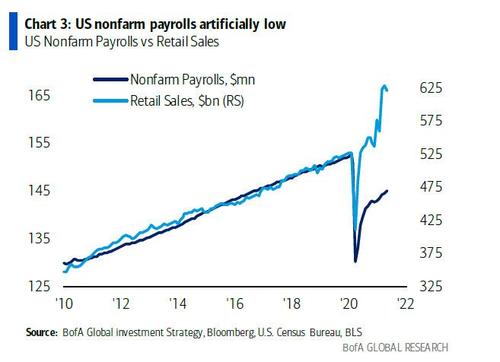 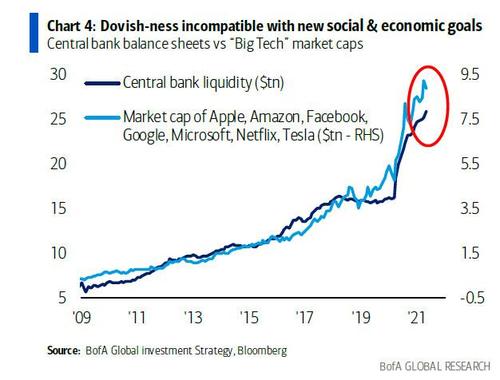 Amid this rapid slowdown in QE, we are also seeing a sharp tightening in financial conditions on the rate side with 19 rate hikes thus far in ’21 vs 5 in ’20 (8 rate cuts vs 195 last year)... 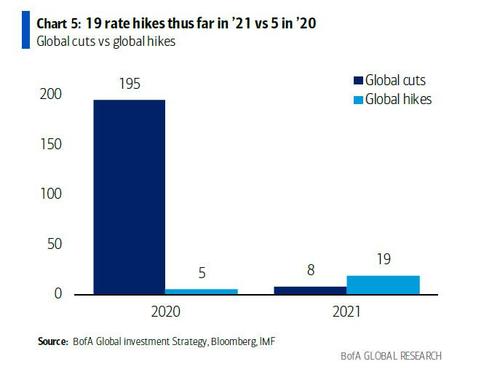 ... so in H2 the market will be a nightmare for most traders, as “good news = tighter liquidity = bad news”…low/negative stock/credit H2 returns. 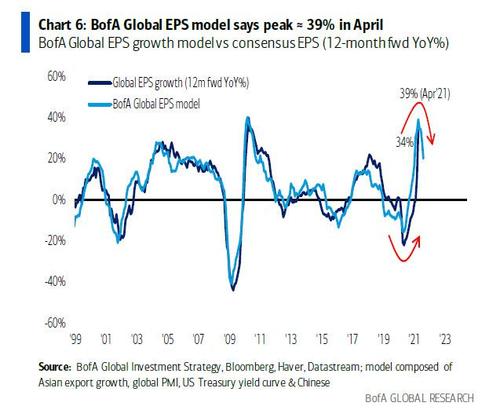 But if only we had signs... Well - we did: one month ago we wrote that China's Credit Impulse Just Turned Negative, Unleashing Global Deflationary Shockwave. Well, with the usual 1 month delay, it has now arrived much to the "shock" of everyone. Here is Hartnett explaining why China is always the tell: 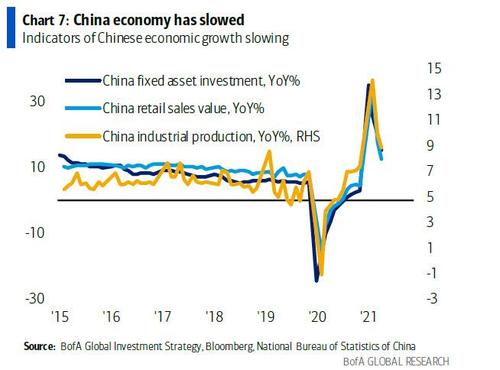 But if global defensives are set to outperform, well then cyclicals are in trouble, or as Hartnett puts it, "a Perfect storm for cyclicals" due to... 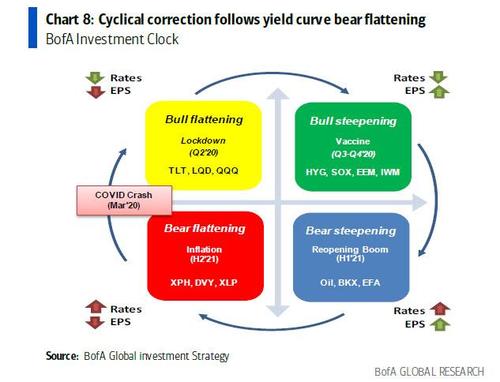 ... vaccine continues to dominate virus (Chart 9) but cyclicals are cyclical, Chart 10, and Q3 correction likely (and perhaps necessary to test that secular inflation trade uptrend is for real).

Finally, is a market correction imminent?

Here Hartnett concludes, a minority “correction crew” say weaker internals always herald weaker index, and yet while it is unlikely to have a correction without IG bonds & tech (majority believe both will be bid), Hartnett says that SPW (equal-weighted S&P) & NYA (NYSE Composite) most important levels to watch coming weeks and lists 4 conditions that would suggest an imminent market breakdown: