EDITOR NOTE: When a government’s reckless financial follies and shenanigans fail to produce anything positive, a tightly centralized government will often force the people to pay for its errors. Take Bolivia--the country that saw a 25,000% hyperinflationary evaporation of its reserves back in the 1980s. To avoid a repeat of such a fate, the country got wise and decided that perhaps physical gold is what its central bank ought to be holding. But they’re beginning to take the gold from their own citizens. The Bolivian government claims to be "cracking down" on illegal gold bullion trades. A crackdown, as in preventing criminal activity. Think about it. Here's what's really happening: all “legal” trades in gold bullion have been rendered “illegal” without certification--essentially a way for the government to mark those who own gold and to coerce them into selling it to the central banks in exchange for tax breaks. Bolivia is just a few steps away from gold confiscation. Hopefully, we’ll never see such a step taken by the US government. But governments change. Circumstances change. And given that gold is a hedge against not only monetary debasement but the government itself, it makes sense to own only non-CUSIP gold and silver--metals that are neither trackable nor accessible to anyone besides you, the owner.

What is Bolivia worried about?

Perhaps the 25,000% hyperinflationary evaporation of the peso in the '80s has left a deep scarring on the South American countries lawmakers.

In 2018, The Bolivian Central Bank (BCB) took the administrative measure to suspend the sale of dollars in order to maintain its peg to the dollar.

And in doing so, the BCB has been forced to puke away its reserves (now at their lowest level) since 2007. 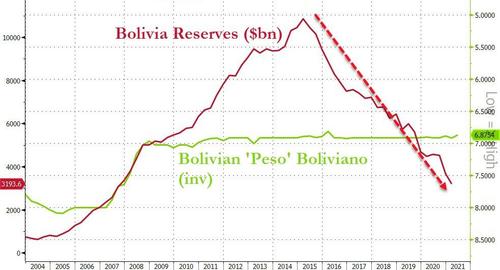 All of which is why, as Bloomberg reports, Bolivian lawmakers are debating a bill that would require all gold produced in the country to be offered to the central bank as the nation builds its reserves.

In addition, the law is an effort to crackdown on the illegal bullion trade.

Local producers would need certification to sell abroad, and would first be required to offer their gold to the central bank at international prices in return for tax breaks, according to a copy of the draft bill.

Exports would be permitted once the bank meets its annual buying limits.

Bolivia currently has about $2.6 billion in gold reserves, making it the fourth-largest holder of bullion among South American nations. 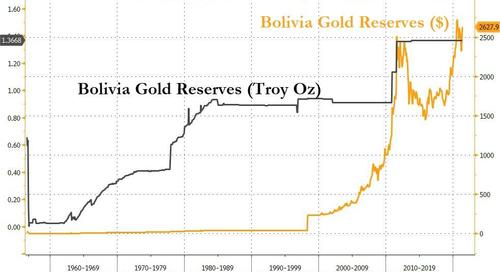 The bill will allow a greater portion of reserves to be held in the precious metal at a time when global stimulus measures stoke inflation concerns that undermine fiat currencies.

Maybe the bitcoinization of El Salvador's economy will provide the confidence for local Bolivians to transfer their wealth into the crypto space?