EDITOR'S NOTE: If sh*t rolls downhill, then it shouldn’t be so hard to follow the trail upward to find the person or people responsible for administering the reek. The DOJ finally got it right with regard to JPM’s manipulative practices, for what they discovered rolling downhill certainly wasn’t a golden egg of executive diversion. It’s not about rogue traders violating company policy. The responsibility points toward the executive level. It’s not about managerial aberrance but a large-scale cultural deviation from ethical and legal norms. What’s at risk here is not just the spread of C-level transgression but the integrity of the entire gold trading industry from the bullion banks to COMEX. If there’s anything we can learn from the findings below, it’s that, yes, the system is rigged to the core, and its rigged against you and every American in a manner that is systemically corrupt and driven by an impulse to raid your wealth.

Bombshell: The Key Word is "Executives" 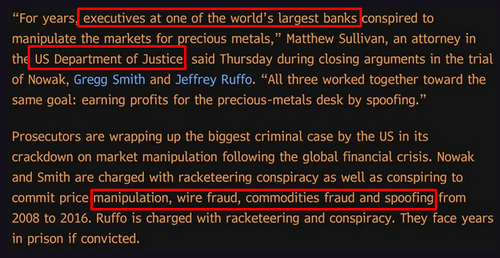 Closing arguments Thursday set the table for years of bank problems. It may be a very serious development. Implications are all laid out clearly in this 9 minute podcast  where the DOJ has finally turned its focus on one of the institutions  the US has protected for decades. Future implications are very large for bullion banks and executives everywhere. Listen: here.

One Minute Clip summarizing the situation...

Bank Executives Now On The Hook

In the segment we give serious context to the Bloomberg story out late last week on the case. It implies more problems for the bullion banks and their executives down the line.  Full 9 minute broadcast here