EDITOR'S NOTE: The widespread lack of sound economic knowledge has driven society toward several erroneous assumptions and actions. Blaming the economy on fiscal policy while remaining ignorant of monetary policy is one. Considering gold and silver relics while not understanding the mechanics of money is another. Failing to hedge economic downturns as a result of ignorance and encouraging people to eat bugs if they can’t afford other forms of protein is the latest example of economic ignorance. It sounds outrageous but the Washington Post is actually telling Americans that eating bugs may be a solution to mitigate their economic woes. Don’t believe us? Read on and see for yourself. If anything, take it as a lesson on the consequences of bad economic education. Meanwhile, the financial elite continues to eat the finest cuisines the world has to offer. Perhaps we’re witnessing the formation of a new dystopian sci-fi class system that’s slowly converging with our reality.

The Washington Post advised Americans Sunday that instead of a traditional season dinner, which now is unaffordable for a quarter of families, they should instead look to eating bugs.

In an article headlined Salted ants. Ground crickets. Why you should try edible insects, the Post stated “Consumers can already find foods like salted ants on Amazon and cricket powder protein bars in Swiss grocery stores.” 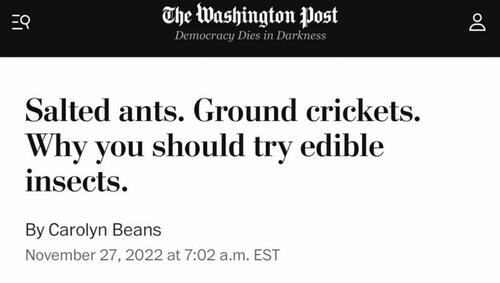 The piece quoted a six year old girl in Pennsylvania who was supposedly given a rousing ovation by onlookers for eating fried worms.

The piece states “It’s not that bad!” she exclaimed. “It kind of tastes like kettle corn!”

There’s the usual crap about crickets having more protein than beef and everyone in third world countries already eating them, so why are you any better… etc

“Watching others enjoy insects may also help break down barriers,” the piece states under a sub headline “Creating a new norm.”

It further states “before insects can become common fare, more diners must be convinced that six-legged critters are, in fact, food. Through tasting experiments, surveys and educational demos, researchers, entrepreneurs and educators are delving into consumers’ psychology and finding that resistance to insect-eating can be strong.”

This is the latest in a growing trend of pushing bug eating on the masses as a way of ‘saving the planet’.

A major supermarket chain in the UK is finalising plans to stock insects on its shelves and market them as a cheap food source for people struggling to afford to feed their families amid soaring inflation and the cost of living crisis.

The Daily Mail reported recently that Aldi is considering stocking ‘edible’ bugs and providing recipe kits for parents to prepare worms and crickets for their hungry children.

Potential products in the range include ‘sustainable’ cricket burgers, as well as ‘nuggets’ and ‘mince’.

You will eat the bugs. You will own nothing. And you will be happy. pic.twitter.com/6Pkj5Ol4Td

Just when you thought this couldn’t get any more more dystopian, the supermarket is involved with a TV game show in which insect ‘farmers’ will pitch the bugs as the ‘next big thing’ for Aldi, according to the report.

In addition to crickets, worms and maggots are also big in Europe.

There are even proposals to feed them to school kids:

How about a weed side salad? And why not wash down your worm food with a tall refreshing glass of sewage?

in 2020, the World Economic Forum published two articles on its website which explored how people could be conditioned to get used to the idea of eating weeds, bugs and drinking sewage water in order to reduce CO2 emissions.

A separate article published on the WEF website outlined how people can be conditioned to enjoy consuming ‘food’ which on the surface sounds disgusting.

The ‘Great Reset’ is about enacting a drastic reduction in living standards for the plebs which will force them to put bugs, weeds and sewage on the menu while the Davos elites continue to feast on the finest cuisine in their ivory towers.

Brand new merch now available! Get it at https://www.pjwshop.com/

In the age of mass Silicon Valley censorship It is crucial that we stay in touch. We need you to sign up for our free newsletter here. Support our sponsor – Turbo Force – a supercharged boost of clean energy without the comedown. Also, we urgently need your financial support here.