The new coronavirus has already infected the global economy. The global lockdown means that recession is inevitable. The central banks all over the world have stepped in, including the Fed, cutting interest rates and pumping liquidity into the system. We invite you thus to read our today’s article about the monetary policy in time of plague and find out what the fresh central banks’ bazookas imply for the global economy and the gold market.

For example, the ECB announced an economic stimulus program worth €750 billion, in addition to the earlier €120 billion. Together, the ECB’s stimulus amounts to 7.3 percent of euro area GDP. Importantly, the central bank of the eurozone will buy both public and private securities in a flexible manner. As Christine Lagarde explained the rationale behind the new asset purchase program, called Pandemic Emergency Purchase Programme,

Extraordinary times require extraordinary action. There are no limits to our commitment to the euro. We are determined to use the full potential of our tools, within our mandate.

The ECB’s U-turn (the central bank’s initial response was much more moderate) suggests that the Eurozone is suffering great economic damage and that the entire project of the euro is at risk. If we see concerns about the future of the Eurozone, gold could shine as it did during the European sovereign debt crisis in 2010-11 (although rising dollar could hamper gold’s rally).

The Bank of Japan also eased monetary policy by expanding its quantitative easing program. It doubled the rate at which it was purchasing ETFs from $56 billion a year to $112 billion, and also increased purchases of corporate bonds and commercial papers. The central bank also announced a new loan program to extend one-year, zero-rate loans to financial institutions. However, the action was relatively moderate, which indicates that the BoJ is simply out of ammunition. Central banks out of bullets are good news for gold.

The Bank of England slashed interest rates from 0.75 to 0.1 percent, lowered capital requirements for commercial banks and started buying $228 billion worth of U.K. government bonds and corporate bonds. Meanwhile, the People’s Bank of China expanded reverse repo operations by $174 billion, cut the one-year medium-term lending facility rate by 0.10 percent, reduced the prime rates and lowered bank reserve requirements, freeing up about $79 billion to be lent out.

Last but definitely not least, the Federal Reserve has also reached for more monetary artillery. First, as the chart below shows, it slashed (in two moves) the federal funds rate from 1.50-1.75 to 0.25 percent, the level unseen from the Great Recession. Welcome back ZIRP! Gold missed you! 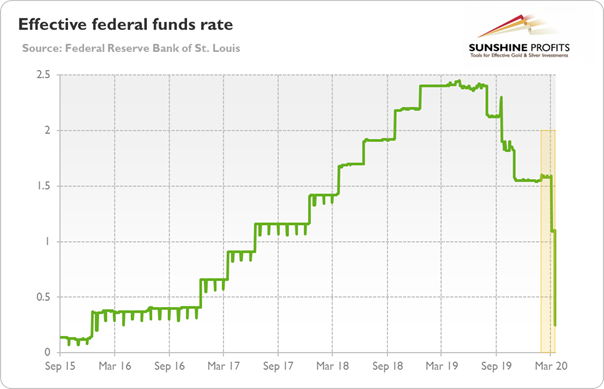 Second, the US central bank restarted the quantitative easing. It aims to purchase $500 billion worth Treasuries and $200 billion worth mortgage-backed securities. It means that the Fed’s balance sheet (see the chart below) will increase further – and substantially! And since March 23, unlimited. Oh, boy, we fell already twelve years younger, as if we’re seeing a replay of the Great Recession! 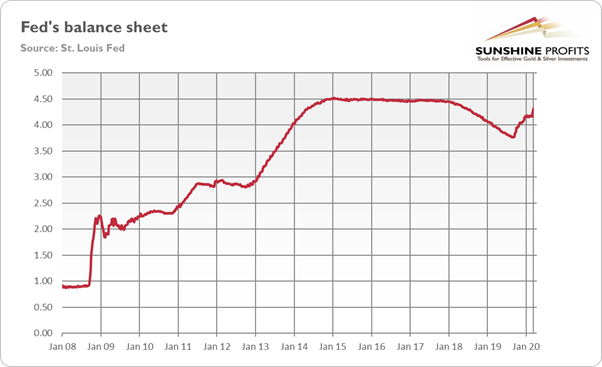 Third, the Fed expanded its reverse repo operations, adding $2 trillion (initially $1.5 trillion followed by $0.5 trillion) of liquidity into repo market. Does that market function at all?

Fifth, the US central bank relaunched the Primary Dealer Credit Facility offering short-term loans to banks secured by collateral such as municipal bonds or investment-grade corporate debt. Another tool from the financial crisis of 2008.

Sixth, the Federal Reserve announced the Money Market Mutual Fund Liquidity Facility to lend money to banks so they can purchase assets from money market funds. As it reflects the passive investing bubble, this seems to be a new program!

Seventh, the US central bank cut its discount rate from 1.75 to 0.25 percent to make loans to commercial banks cheaper.

Eight, the Fed reduced reserve requirement ratios to zero percent which eliminates completely reserve requirements for thousands of depository institutions. The commercial banks would be able now to expand significantly their credit action (although it’s unclear whether they will do it – they do not lack reserves, actually they sit on excess reserves).

Ninth, the Fed reopened international swap lines, to make U.S. dollars available to other central banks, so they can lend to banks that need them.

Wow, the Fed’s response looks impressive, doesn’t it? And it was expanded even further on March 23! But, there is one small problem – it will not prevent recession and it will not stimulate economy. The reason is simple: monetary policy cannot defrost the frozen real economy. The central banks cannot fix the broken supply chains. You see, the reason behind this crisis is pandemic which ushered social distancing and economically destructive lockdown. Recession is, in a sense, the tool to mitigate the epidemic of COVID-19. So, the easy monetary policy will not help us here. It will only increase the money supply, lower the real interest rates and increase the risk of inflation. Such a macroeconomic environment is fundamentally positive for the gold prices.