EDITOR'S NOTE: Central banks are currently accumulating the largest gold reserves ever held on a global scale since 1967. Typically, you wouldn’t see such a massive stockpile unless the world’s central banks were anticipating a level of monetary devastation that potentially justified such a colossal hedge. So, what do central banks know that the world’s regular citizens don’t? Does it have anything to do with the direction of the current economy? Or might it have something to do with the introduction of central bank digital currencies (CBDCs) and their potentially devastating effects, known and unknown, on the global financial system? As a gold investor, wouldn’t it be prudent to accumulate a larger allocation of the yellow metal, if not for the bullish effect of central bank buying than as a hedge against the conditions to which central banks seem to be most concerned?

In 2022, central banks will have purchased the largest amount of gold in recent history. According to the World Gold Council, central bank purchases of gold have reached a level not seen since 1967. The world’s central banks bought 673 metric tons in one month, and in the third quarter, the figure reached 400 metric tons. This is interesting because the flow from central banks since 2020 had been eminently net sales.

Why are global central banks adding gold to their reserves? There may be different factors.

Most central banks’ largest percentage of reserves are US dollars, which usually come in the form of US Treasury bonds. It would make sense for some of the central banks, especially China, to decide to depend less on the dollar. 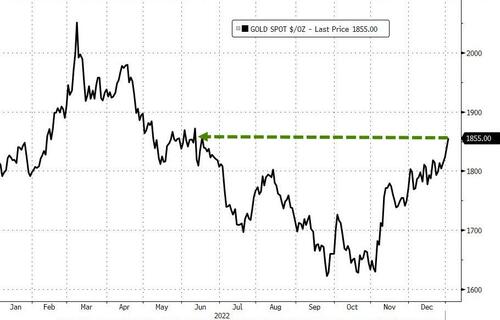 China’s high foreign exchange reserves are a key source of stability for the PBOC. But the high amount of US dollars ($3.1 trillion) may have been a key stabilizing factor in 2022, but it could be too much if the next ten years bring a wave of money devaluation that has never happened before.

Central banks have been talking about the idea of issuing a digital currency, which would completely change the way money works today. By issuing a digital currency directly into a citizen’s account at the central bank, the financial institution would have all access to savers’ information and, more importantly, would be able to accelerate the transmission mechanism of monetary policy by eliminating the channels that prevent higher inflation from happening: the banking channel and the backstop of credit demand. What has kept inflation from going up much more is that the way monetary policy is passed on is always slowed down by the demand for credit in the banking system. This has obviously led to a huge rise in the prices of financial assets and still caused prices to go through the roof when the growth in the money supply was used to pay for government spending and subsidies.

If central banks start issuing digital currencies, the level of purchasing power destruction of currencies seen in the past fifty years will be exceedingly small compared with what can occur with unbridled central bank control.

In such an environment, gold’s status as a reserve of value would be unequalled.

There are more reasons to buy gold.

Liquidity was cryptocurrency’s Achilles’ heel. A few rate hikes by the Fed quickly disproved the idea that digital currencies could only go up in value. Cryptocurrencies did not combat monetary expansion; rather, they were one of its effects. Gold was now one of the few remaining true reserves of value.

The performance of gold in US dollars may have disappointed investors in 2022, even though it was flat, but in a year of broad financial asset declines, gold rose in euro, pound, yen, and the majority of emerging currencies.

Central banks need gold because they may be preparing for an unprecedented period of monetary devastation,

The Financial Times claims that central banks are already suffering significant losses as a result of the falling value of the bonds they hold on their balance sheets. By the end of the second quarter of 2022, the Federal Reserve had lost $720 billion while the Bank of England had lost £200 billion. The European Central Bank is currently having its finances reviewed, and it is predicted that it will also incur significant losses. The European Central Bank, the U.S. Federal Reserve, the Bank of England, the Swiss National Bank, and the Australian central bank all “now face possible losses of more than $1 trillion altogether, as once-profitable bonds morph into liabilities,” according to Reuters.

If a central bank experiences a loss, it can fill the gap by using any available reserves from prior years or by requesting help from other central banks. Similar to a commercial bank, it may experience significant difficulties; nevertheless, a central bank has the option of turning to governments as a last resort. This implies that the hole will be paid for by taxpayers, and the costs are astronomical.

The wave of monetary destruction that could result from a new record in global debt, enormous losses in the central bank’s assets, and the issuance of digital currencies finds only one true safe haven with centuries of proven status as a reserve of value: Gold. This is because central banks are aware that governments are not cutting deficit spending.

These numbers highlight the enormous issue brought on by the recent overuse of quantitative easing. Because they were unaware of the reality of issuer solvency, central banks switched from purchasing low-risk assets at attractive prices to purchasing any sovereign bond at any price.

Why do central banks increase their gold purchases just as losses appear on their balance sheets? To increase their reserve level, lessen losses, and foresee how newly created digital currencies may affect inflation. Since buying European or North American sovereign bonds doesn’t lower the risk of losing money if inflation stays high, it is very likely that the only real option if to buy more gold.

The central banks of industrialized nations will make an effort to shrink their balance sheets in order to fight inflation, but they will also discover that the assets they own are continuing to depreciate in value. A central bank that is losing money cannot immediately expand its balance sheet or buy more sovereign bonds. A liquidity trap has been set. Quantitative easing and low interest rates are necessary for higher asset values, but further liquidity and financial restraint may prolong inflationary pressures, which would then increase pressure on asset prices.

The idea that printing money wouldn’t lead to inflation served as the foundation for the monetary mirage. The evidence to the contrary now demonstrates that central banks are faced with a serious challenge: they are unable to sustain multiple expansion and asset price inflation, lower consumer prices, and fund government deficit spending at the same time.

So, why gold? Because a new paradigm in policy will unavoidably emerge as a result of the disastrous economic and monetary effects of years of excessive easing, and neither our real earnings nor our deposit savings benefit from that. When given the choice between “sound money” and “financial repression,” governments have forced central banks to choose “financial repression.”

The only reason central banks buy gold is to protect their balance sheets from their own monetary destruction programs; they have no choice but to do so.