EDITOR NOTE: Gold has outshined silver in terms of media spotlight and coverage despite the fact that investment demand for silver has experienced a much larger surge than the yellow metal. Gold is up only 28% year to date next to silver’s 49.9%. Meanwhile, Swiss refiners have been focusing more on gold and less on silver at a time when silver demand has been quietly but sharply booming. Are we about to see a supply shortage that takes gold’s second closer to its 2011 record-high territory?

After last week’s extreme volatility gold and silver consolidated this week, with gold down $10 on balance at $1933 this morning, European time, and silver was up 65 cents at $27.05.

The position with silver is tricky for the bullion banks, which have generally managed to steer clear of being short. In recent weeks they have managed to reduce their net short position to 3,736 contracts (11 August) and we will get an update after hours tonight. The long-term chart puts this in context.

It appears that Swiss refiners are concentrating on refining gold to the exclusion of silver, which has aggravated the shortage of silver bars, which is also the feedstock for production of silver coins. Meanwhile, public demand for the SLV ETF continues apace, forcing demand for more bullion. SLV now accounts for about 50% of LBMA stocks, the rest being stored by industrial users with some in the hands of investors, who for the moment are enjoying the ride.

It is therefore hardly surprising that bullion banks have a hands-off attitude, effectively swinging the short positions in Comex futures onto hedging producers.

In gold, the bullion banks (Swaps) are gradually reducing their net shorts as shown in the table below.

Having only managed to cut their shorts by 4,071 contracts, they still have a long way to go as the next chart shows. 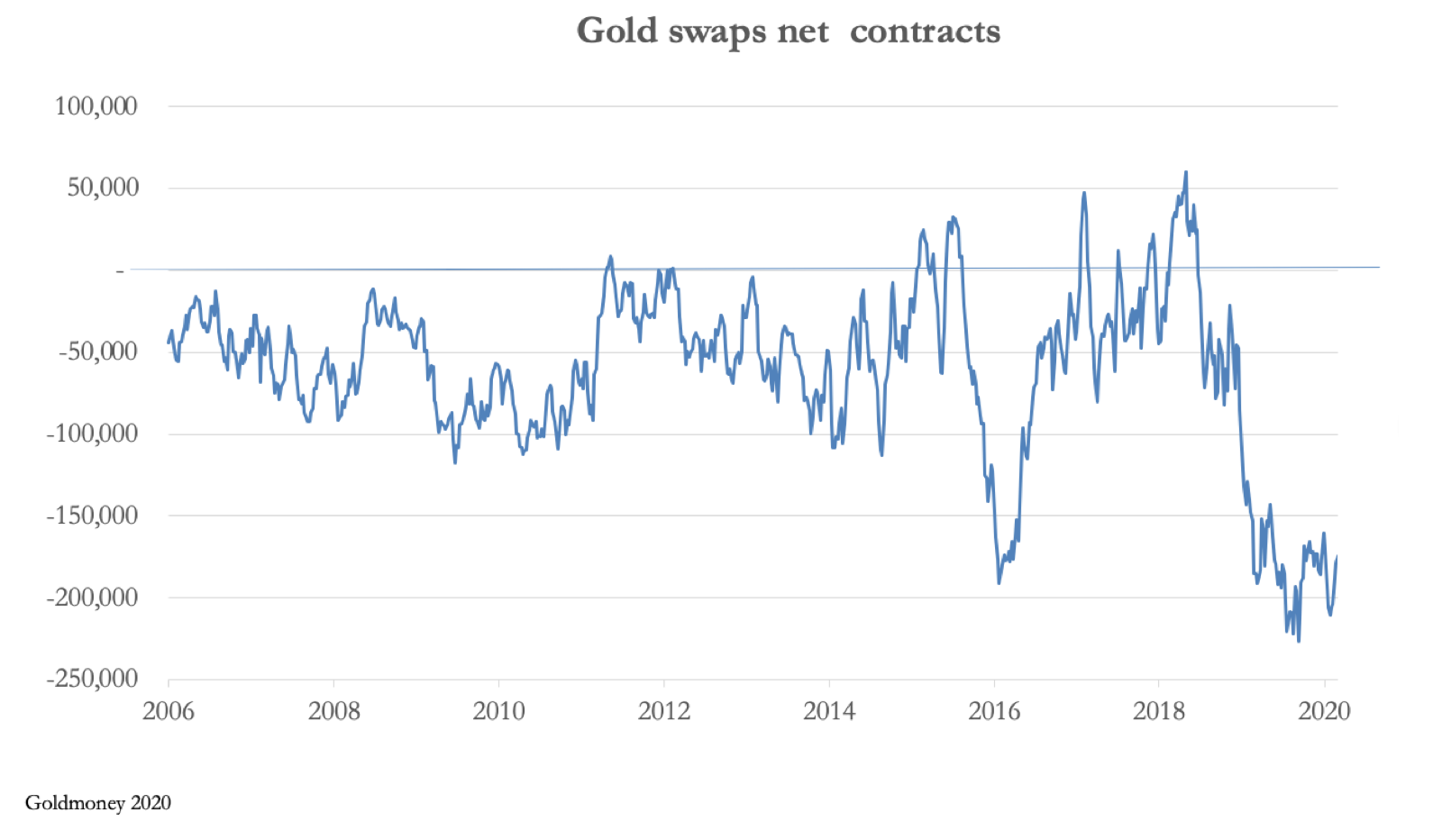 But as the table above illustrates, the Swaps’ short position has reduced not nearly as much as the Managed Money category, which is hedge funds. They have taken profits, reducing their net longs to significantly less than their long-term average, shown in our next chart.

It is the Other Reported and Non-Reported categories which have cut their shorts, making most of the difference between the sharp reduction in Managed Money net shorts and the smaller reduction in the Swap’s net position.

Our last chart shows the technical position, with the gold price well ahead of its moving averages. This is why technical analysts generally expect a more substantial correction, claiming gold to be massively overbought in a bullish context. 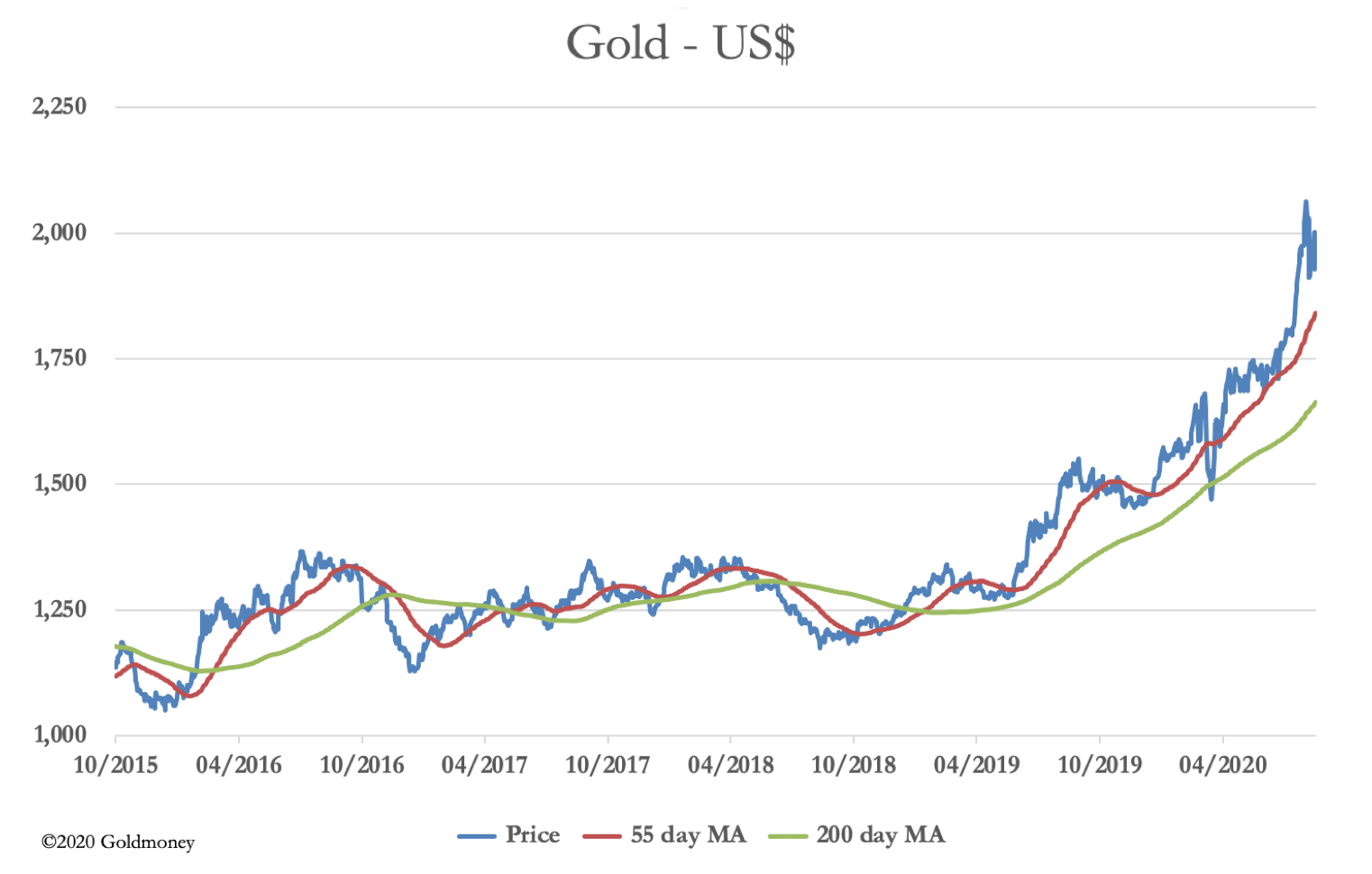 But as we have seen, by examining the underlying position on Comex, the true position is very different. What technical analysts cannot deduce from their charts is that the underlying problem is a shortage of physical gold liquidity in London at a time when the Other Reported and Non-Reported Commitment of Traders categories are standing for delivery on Comex.

The fundamental background is still massively inflationary. When the Fed promised on 23 March to do everything it could to support the US economy, it committed to unlimited monetary inflation, already reflected in prices for a wide range of commodities from copper to oil to lumber. Even used car prices in America are reportedly now rising strongly.

There is a growing recognition that the much-heralded V-shaped recovery is not going to happen beyond a temporary recovery following lockdowns. That being the case, the Fed is committed to unlimited monetary inflation, which is already undermining the dollar, the trade weighted version of which continues to decline.