EDITOR'S NOTE: With the Fed’s rate hike program in full swing, one would expect corporate America's borrowing habits to shift as the cost of debt gets more expensive. When interest rates rise, the business environment undergoes something of a spring cleaning. Wasteful projects and other malinvestments get “cleaned out,” so to speak. Companies with enough capital to take on a higher debt load may do so through new bond issuances. This principle is reflected in the activities of the high grade vs high yield corporate bond market. High-grade companies continue to raise capital via bonds, arguably giving the impression that corporate America is heading into a slowdown or recession with ample strength. It’s possible, though much depends not only on the Fed but also on investors who are closely looking at guidance and earnings. Any unexpectedly aggressive move on the Fed’s part or any miss on earnings or guidance can easily trigger a downturn in market confidence. And the resulting outflows would likely sour any prospects of further debt accumulation. 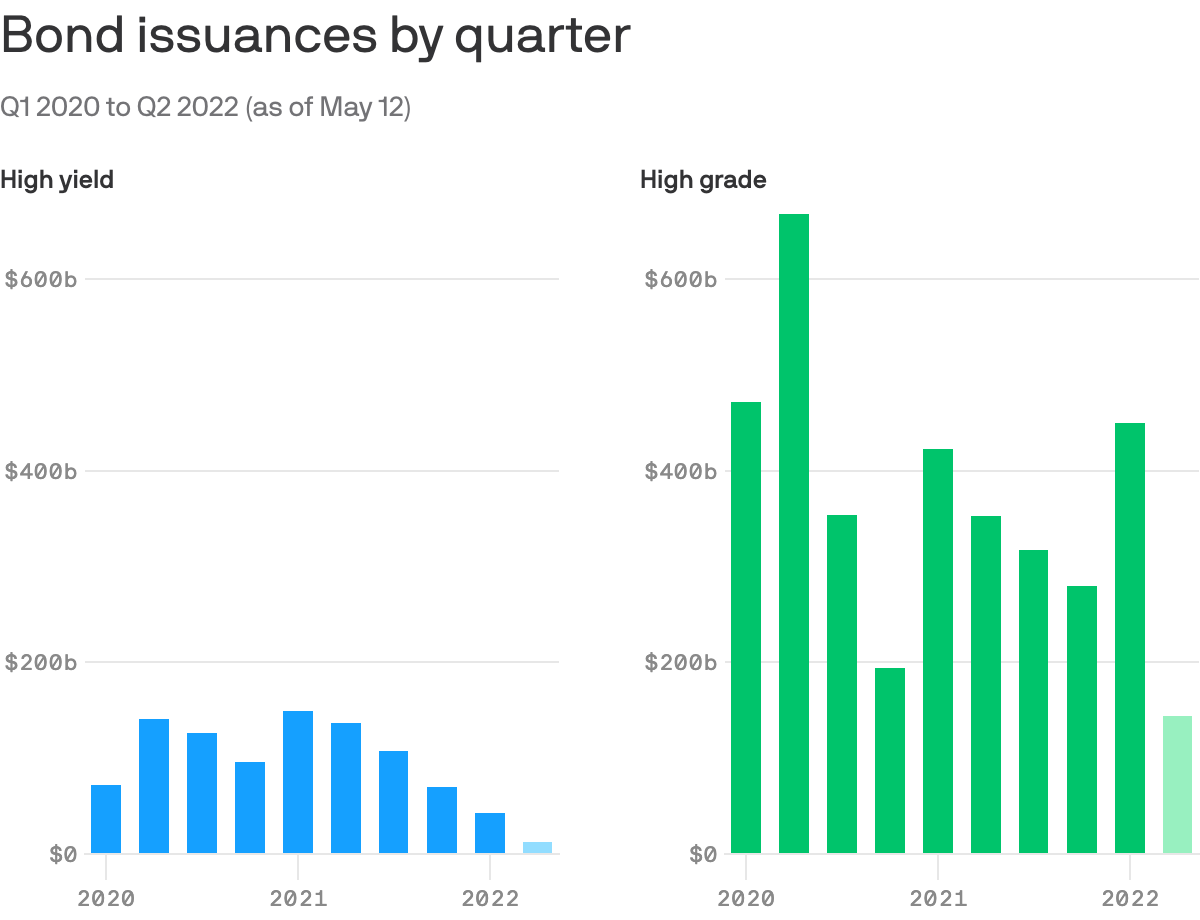 It’s been five months since the Federal Reserve started hinting it was about to raise interest rates, and two since its first hike — so it's a good time to check in on how the shift in monetary policy is changing corporate America’s borrowing habits, Axios' Kate Marino writes.

Why it matters: The Fed is on a mission to make money more expensive — and that's supposed to constrain borrowing and slow the economy.

How it's going: Well, large companies with strong finances — i.e. piles of cash and manageable debt loads — basically haven’t skipped a beat. These "high grade" companies borrowed nearly as much so far this year as they did over the same period last year — and that was a record.

Yes, but: It's a different story altogether for "high yield" companies, or the companies with heavy debt loads and lower credit ratings. Borrowing activity for these companies has basically fallen off a cliff.

In short, high yield companies are only tapping the bond market now if they absolutely need to, says Chris Blum, BNP's head of leveraged finance.

What to watch: If the Fed doesn’t stop at the expected 2 percentage points or so in rate hikes this year. In that scenario, the borrowing slowdown could spread to high grade companies, Forshner says.

The bottom line: "At some point, the cost of capital is going to have an impact on their investment decisions,” he adds.