EDITOR NOTE: Let’s consider for a moment that in the US, what matters isn’t so much “who” occupies the White House and what fiscal policies may come forth, but rather the Federal Reserve’s monetary policy. In the global economy, what matters most these days, isn’t so much what the Federal Reserve does, but what China does. Right now China is facing a massive $900 billion funding shortage. What’s going to happen to the global economy and, by extension, the US economy, should China, in the next few days to weeks, decide once and for all to turn off its liquidity spigot? The consequences may be disastrous. How so? China is currently the world’s largest “reflationary” engine. Not getting it? Read on.

Update: facing a potentially calamitous liquidity shortage, China buckled and despite hawkish commentary from its central bankers, moments ago the PBOC announced that it would offer a whopping 800 billion in MLF, which was not only vastly greater than the CNY 200BN whisper number, but was 200 billion more than the currently maturing MLF amount of 600 billion, indicating that what PBOC Deputy Governor Liu Guoqiang said recently when he warned that exiting easing measures was "a matter of time" and "necessary," was just a jawboning placeholder, and with China finding itself in a funding scramble, the PBOC not only delivered but left quite a bit of liquidity on top. 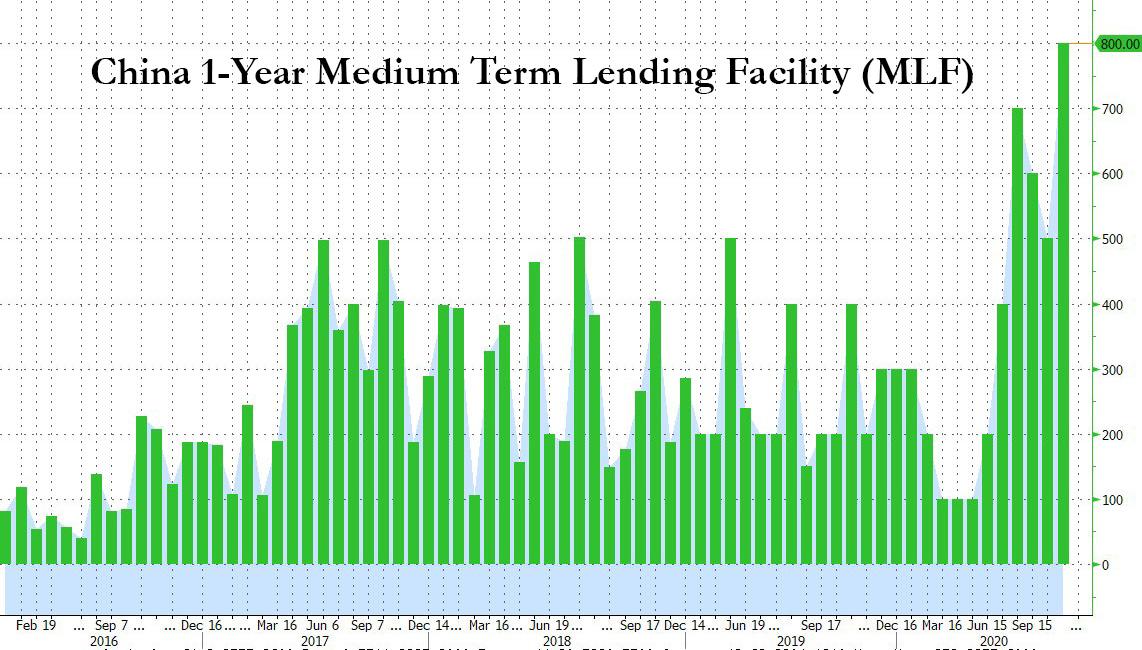 In all the recent noise surrounding the presidential elections, the pandemic, the state of US fiscal stimulus, and a possible vaccine it is easy to forget that what really matters for the global economy is neither US fiscal or monetary stimulus, nor who the US president is, but rather what China does: after all, recall that it was China's epic credit expansion in 2009 that successfully pulled the world out of the post-Lehman depression, with Chinese credit injections in the past decade putting the Fed and all other developed central banks to shame. Nowhere is this clearer than in a comparison of total assets in the US vs Chinese banking sector where some may be surprised to learn that China's banking sector is more than twice as large as that of the US.

It's also why we - and many others - have repeatedly said that what really matters for the world economy, and for global reflation is China's credit impulse, which as we have shown recently has soared in recent months, and a delayed correlation with 10Y yields suggests that a major spike in real 10Y rates is coming. 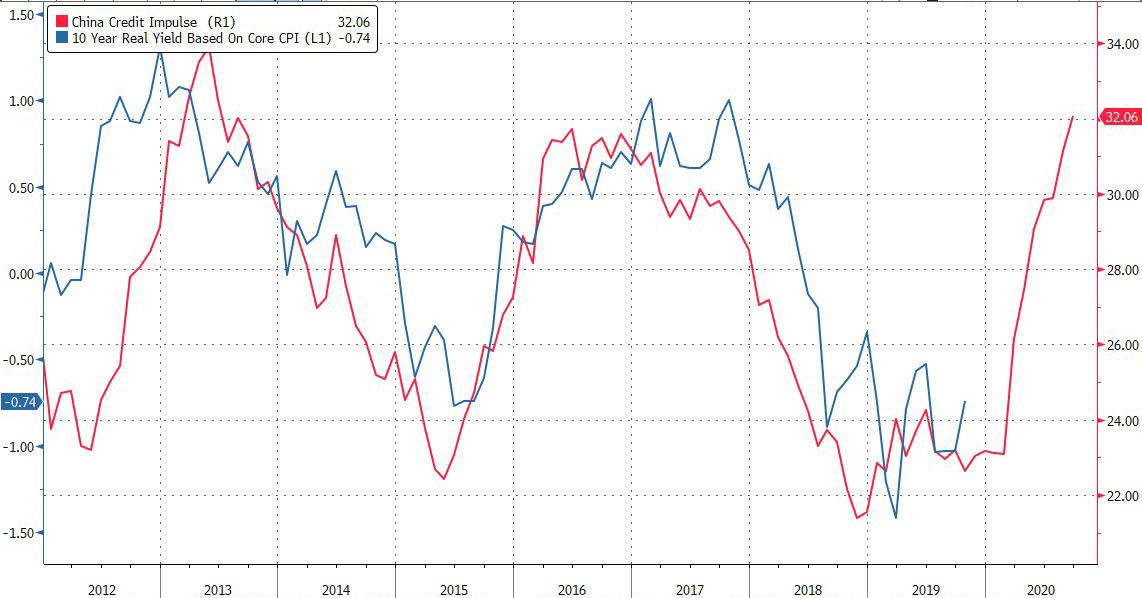 We bring all this up, because despite the recently concluded Communist Party Plenum according to which everything is great, lately China's financial system is experiencing some major glitches starting with what we discussed earlier today, the unexpected default of the AAA-rated state-owned coal mining company, Yongcheng Coal and Electricity Holding Group, which came as a shock to most investors and sent state-backed local debt - previously seen as sacrosanct due to an implied state backstop - tumbling as markets repriced the long-running assumption that Beijing would never allow SOEs to fail.

There is another problem: as Bloomberg writes, increasingly weary trader eyes are now looking at China’s central bank for any signal of potential monetary easing, as a $900 billion funding shortage raises concerns over tighter liquidity.

The first clue should come in hours, if not minutes when early on Monday (local time) the People’s Bank of China is expected to at least offset most of the 600 billion yuan ($91 billion) of policy loans coming due this month. The funds, which were offered by the central bank a year ago via the medium-term lending facility, are just about 10% of the total amount local banks need to repay debt and buy government bonds by the end of 2020.

As China is among the first countries in the world to consider reversing emergency stimulus measures deployed to support markets in the wake of the coronavirus outbreak - now that its economy is reportedly humming - a withdrawal of liquidity by the state (which lately has been cracking down on excess leverage everywhere from Evergrande to the fintech industry) may stoke fears of tighter monetary policy as the economy recovers from the pandemic. Alternatively, a meaningful net injection would be viewed a sign that Beijing is committed to ensuring ample cash supply and is not willing to risk tipping over the boat at a time when Chinese investor nerves are already frayed in the aftermath of the shocking pulling of the 800x+ oversubscribed Ant Financial IPO (which as the WSJ reported last week, followed an order from Xi Jinping himself as China's leader seeks to put upstart and outspoken local billionaires in their place). 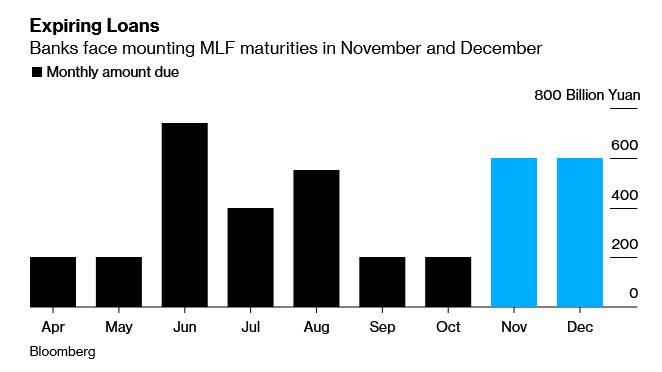 However, how the PBOC treats the maturing 600bn yuan MLF (whether it rolls it in a similar size loan, or shtinks it) is just the start, because as Bloomberg explains demand for cash will surge in the coming weeks, as banks will need to repay more debt and buy newly issued government bonds, while facing yet another 600bn MLF maturity.

In total, a combined 1.2 trillion yuan in MLF funds is due in November and December, or roughly a third of this year’s total. On top of that, lenders are set to repay at least 3.7 trillion yuan of short-term interbank debt and use another 1 trillion yuan to buy sovereign bonds by end-2020.

Said otherwise, if Beijing wishes to, it could drain as much as $6 trillion, or roughly $900 billion, in liquidity from the Chinese financial system in the next 6 weeks.

While under normal conditions, traders would hardly be worried that Beijing would do anything but continue the liquidity status quo, recent comments from officials have sparked funding concerns.

While we will know shortly if the PBOC's liquidity generosity persists, concerns about tighter liquidity have already driven banks to demand a higher yield when lending to each other. The interest rate on one-year negotiable certificates of deposits issued by AAA rated banks has climbed to the highest since June 2019. 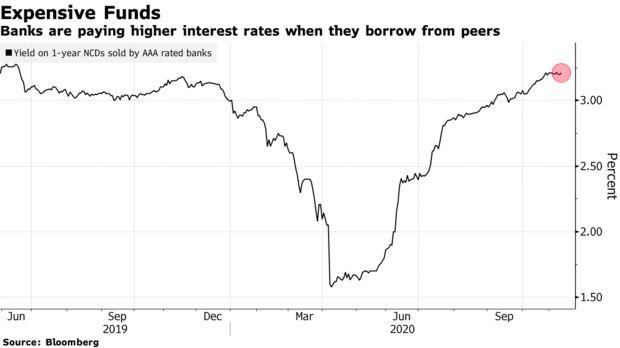 The overnight repo rate also jumped to the most elevated since January on Thursday according to Bloomberg data, providing further evidence of the rising thirst for liquidity. On Friday, the PBOC responded by adding 160 billion yuan on a net basis into the financial system via seven-day repurchase agreements, the biggest injection since Sept. 22.

That's hardly enough, however, with much more liquidity needed.

China's massive commercial banks - the biggest buyer of Chinese government bonds - now have less idle cash to invest in the fixed-income market, and some of them even need to shed their holdings of the securities for funding, according to Bloomberg. Worries over cash supply have already led to a sell-off in sovereign bonds with short tenors, which are more sensitive to shifts in liquidity conditions. 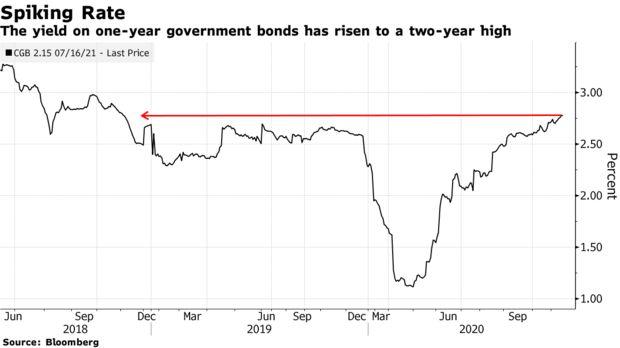 That has helped narrow the gap between one- and 10-year yields to near the smallest since September 2019.

Naturally, the liquidity shortage has been bad news for bond bulls, and the yield on 10-year Chinese sovereign bonds has jumped about 8 basis points so far in November, in part tracking the concurrent rebound in "reflationary" sentiment in the US. That came after the notes just posted the longest stretch of monthly declines since 2007 in October, making them worst performers in Asia this year. 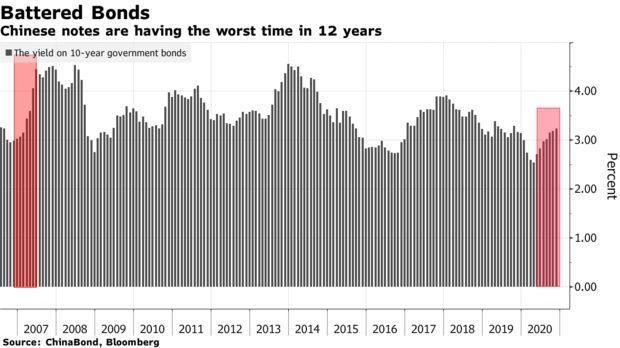 While US traders have not had to worry about Chinese financial conditions for a long time, having been distracted by everything from the election, to covid, to fiscal stimulus negoatiations, all those risks are well-known and priced in, the real risk is what China could do in the coming days and weeks if it decides to suddenly turn off the liquidity spigot. A worst case scenario could have dire consequences for global capital markets due to China's position as the hub in the global liquification/reflationary apparatus.