EDITOR NOTE: Imagine receiving digital money from the government with a note: “You have X amount of days to spend these digital funds, after which the funds will no longer be valid.” Expirations on money are currently being tested as a potential part of China's digital Yuan. So, if the government needs to boost the economy, it no longer needs to wait for the population to adapt its mindset from saving to spending. It simply imposes a shorter expiration on the money. Our fears, regarding the digital dollar, have always been focused on negative rates as a way to get people spending rather than saving. Now, any central bank with a CBDC may be able to do both--impose negative rates and set expiry dates. CBDC technology is one lever by which the government can control the population, like the tail wagging the dog. If economics used to be a way of studying “human action,” now it’s a system whereby the government can virtually automate behavior by holding hostage the means of exchange. And it doesn’t end there either. The government can collect data and even observe real-time data for any citizen receiving or using digital currency. The only way out of this system has to be through money’s “store of value” function. And the solution is to hold physical gold and silver.

Two weeks ago, we reported that one of the most remarkable "features" of the brand new and soon to be unrolled digital Yuan, which should not be confused with any account-based currencies or commercial bank, private or unbackstopped digital currencies... 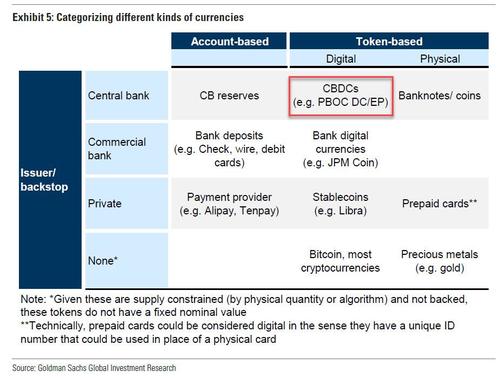 ... is that it will come with an expiration date. As the WSJ reported, "the money itself is programmable. Beijing has tested expiration dates to encourage users to spend it quickly, for times when the economy needs a jump start."

While China's digital yuan will have an uphill climb in seeking to dethrone the dollar as a global reserve currency - despite Beijing's protests that it has no such ambitions - as it’s an electronic version of a currency nobody wants (for now), the new currency will allow Beijing to weaponize its currency response to its every growing roster of trade partners. As Bloomberg details, instead of challenging U.S. dollar dominance and neutralizing sanctions, "the digital yuan appears potentially more geopolitically significant as leverage over multinational companies and governments that want access to China’s 1.4 billion consumers. Since China has the ability to monitor transactions involving the digital currency, it may be easier to retaliate against anyone who rebuffs Beijing on sensitive issues like Taiwan, Xinjiang and Hong Kong."

“If you think that the United States has a lot of power through our Treasury sanctions authorities, you ain’t seen nothing yet,” Matt Pottinger, former U.S. deputy national security adviser in the Trump administration, said last week at a hearing of the government-backed U.S.-China Economic and Security Review Commission. “That currency can be turned off like a light switch."

As Michael Every summarizes in his Tuesday Global Daily, "good luck to multinationals heartily agreeing that decoupling is unwanted, as they try to straddle the US, and its growing thicket of USD sanctions wrapped around a human rights foreign policy focus, and China, with its Panopticon e-CNY that can be turned off to ensure US sanctions and human rights foreign policy have no power over it."

Indeed, as Bloomberg confirms, so far China has mostly resisted hitting foreign firms in response to U.S. actions on companies like Huawei, holding off on releasing an “unreliable entity list” designed to punish anyone who damages national security. Any move to cut off access to the digital yuan would carry similarly high stakes, potentially prompting foreign investors to pack up and leave.

But, as the report notes, Beijing has recently gone after such major multinationals like H&M for statements on human-rights issues, even while government officials have been careful to avoid directly endorsing a boycott. In a Weibo post last month, the Communist Party Youth League declared: “Want to make money in China while spreading false rumors and boycotting Xinjiang cotton? Wishful thinking!”

There's more: widespread adoption of the digital yuan - also known as the e-CNY - could give China’s central bank more data on financial transactions than the big tech giants, allowing the Communist Party to both strengthen its grip on power and fine-tune policies to bolster the economy. While cryptos seek to disintermediate the state from monetary transactions, a digital yuan would do the opposite and give the PBOC even more sway and minute control over every single transaction, while obliterating monetary anonymity entirely.

While that level of control may boost growth in the world’s second-biggest economy, it also risks spooking companies and governments already wary of China’s track record on intellectual property rights, economic coercion and rule of law.

So, while many have said that the US has a nuclear option in its escalating feud with China in the form of selective cancellation of Treasurys held by China (whether it will do so is a different matter entirely), China will soon have its own nuclear option.

Yet said option may well backfire: while President Xi has called for greater self-sufficiency in key technologies like advanced computer chips, such a financial decoupling from the U.S. would only hurt China’s economy and potentially leave the Communist Party more exposed to destabilizing attacks, according to BBG. After Xi effectively ended Hong Kong’s autonomy last year with a sweeping national security law, the U.S. refrained from cutting off the territory’s ability to access U.S. dollars due to the potential devastation to the global financial system.

China’s state-endorsed boycott of H&M shows “great commercial risk” for companies that use the digital yuan, Yaya Fanusie, adjunct senior fellow at the Center for a New American Security in Washington, told the U.S.-China Economic and Security Review Commission hearing. If foreign merchants had to use the e-CNY, he said in a separate email, the government could prohibit transactions with H&M wallets and the store could disappear from digital yuan apps.

“This is the other side of the coin -- Beijing not as a sanctions evader, but more empowered to enforce its own financial muscle,” said Fanusie, who has written extensively on how central bank digital assets may impact U.S. financial sanctions. “China’s digital currency is as much about data as it is about money,” he added. Foreign firms that use the digital yuan “might end up handing over to the Chinese government lots of real-time data that it could not access efficiently through conventional banking technology.”

Ironically, it is China's desire to have total monetary control that may prevent the continues adoption of its currency at the international level: as Bloomberg notes, China’s ability to see every transaction may make it difficult for foreign banks to use the digital yuan and still comply with confidentiality rules in their home countries, according to Emily Jin, a research assistant at the Center for a New American Security. Alternatively, the currency might appeal to some similarly ruthless, despotic, socialist regimes that prioritize control over privacy protection.

“They might find it easier to convince governments more authoritarian in their leaning that it helps monitor elicit activities or stop them quickly or stop them before they happen,” Jin said. “They aren’t going to market it to everyone.”

That's right: if the e-yuan is proven to be a success, the US will rush to roll out its own digital dollar...