EDITOR NOTE: China’s wholesale physical gold demand rebounded in August, according to Gold.org. This rebound happened due to a combination of factors. One factor is that the summer months are generally considered “the gold consumption offseason,” and those months came to an end in August. The other factor is that pandemic numbers are back on the rise in China and, this has slowed the country’s economic growth. Without the optimistic economic outlook, China has been pushing the last few months people are flocking back to gold to protect their wealth. This increased demand has allowed gold prices to recover from an early August dip.

After plummeting in early August, gold prices rebounded. The LBMA Gold Price AM in USD and the SHAUPM in CNY dropped by 0.8% and 0.7% respectively in August. And changes in investor expectations for the US Federal Reserve’s monetary tightening have been the major factor driving the gold price lately. For more information, please read our Gold Market Commentary.

China’s economic growth weakened further in August amid the COVID-19 resurgence. According to the National Bureau of Statistics, China’s official composite Purchasing Managers’ Index (PMI) in August dropped below 50 – the threshold between expansion and contraction – for the first time since February 2020 when the COVID-19 outbreak was at its peak. Once again, China’s economic growth fell victim to the pandemic as strict social and travelling restrictions were reintroduced in multiple cities where cases of the Delta variant had been identified, including Nanjing and Yangzhou, among others.6

In the meantime, the August Producer Price Index (PPI) rose 9.5% y-o-y, the largest increase since August 2008. With industrial metals, coal and other major commodities in China surging for months, China’s PPI continued to rocket, accumulating inflationary pressure for consumers.

Trading volumes of Au(T+D) on the SGE and gold futures on the SHFE rose 6.5% and 3.9% m-o-m respectively. Higher gold price volatility in August than in July might have increased short-term trader interest in these contracts, leading to the m-o-m rise in trading volumes.

However, the trading volumes were significantly lower y-o-y. This is perhaps not surprising considering the context: in August 2020 the local gold price in China recorded its historical high, headlining local news and attracting tremendous attentions from investors. 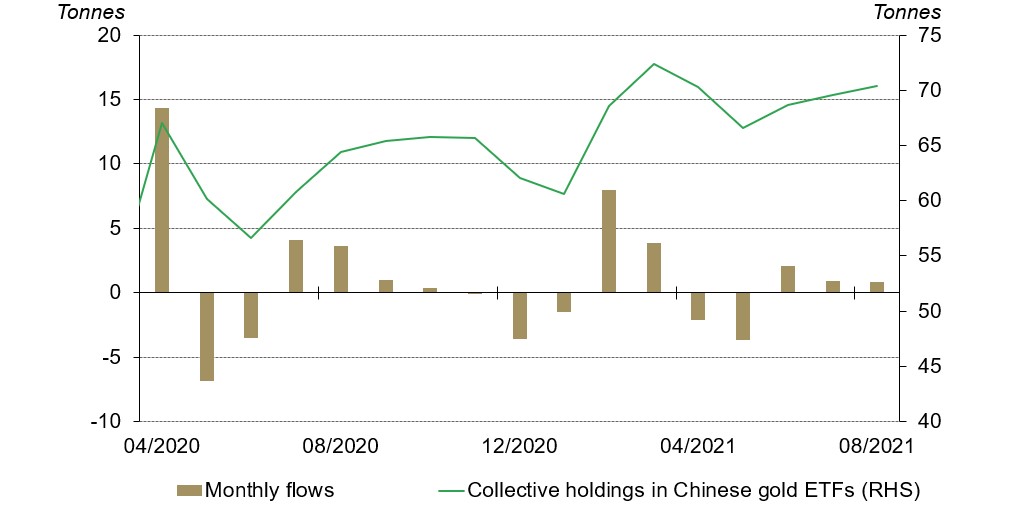 Gold withdrawals from the SGE totalled 150t in August, 39.3t higher m-o-m and 38.6t higher y-o-y. Historical data analysis shows that China’s wholesale physical gold demand tends to rise after the offseason for gold consumption in Q2 and early Q3. Manufacturers usually promote their products through the annual Shenzhen Jewellery Fair in early September or they reach retailers via their own trade shows, both of which necessitate an increase in replenishing activities during August.

Average monthly gold withdrawals from the SGE between 2010 and 2019

As the offseason for gold jewellery consumption comes to an end, jewellers also start to prepare for festival and holiday promotions, such as the mid-Autumn Festival in September and the National Day Holiday in early October, thus lifting wholesale demand in August and September.7

In view of seasonal patterns, but bearing in mind the uncertainties of the pandemic, we are cautiously optimistic for China’s physical gold demand in the near future.