EDITOR NOTE: What many of us forward-leaning investors and analysts called the “everything bubble” four years ago, Bank of America is now calling the “mother-of-all assets bubble” this year. They’re right, of course, but a little late in the game to call it out. They figure that the Fed’s unprecedented money printing and treasury buying is causing “irrational exuberance” in the markets. By now, it’s quite possible that the market figured out the new rules of the game, compared to rules back during the dotcom bubble. Investors aren’t buying stocks out of exuberance in valuations, but rather out of exuberance for the Fed itself, knowing that the central bank is the major tailwind supporting the bull market, not the companies themselves. So, it’s a bubble, and everyone’s playing it. But it’s also a bubble that’s killing the dollar in more ways than one. It’s killing the confidence in US dollar assets, and it’s killing the purchasing power at a steady rate. Fortunately, those who are playing the game smartly are also hedging their chips with gold and silver (the smartest ones purchasing the non-CUSIP variety). For we can’t predict the exact timing of a bubble burst, but we can predict that once stocks fall, there’ll be lesser value in cash than before the bubble began.

A strong start for world equities in 2021 after the fastest bear-to-bull market switch last year has prompted market mavens to flag worries about pricey assets, with BofA calling it the “mother-of-all asset bubbles”.

The torrent of cash sloshing around world markets due to the unprecedented stimulus measures in place to fuel economies coming out of the pandemic-led recession has fed into the euphoric rush to equities, particularly Big Tech.

The U.S. Federal Reserve for instance has been purchasing bonds at a record pace, doubling its balance sheet to nearly $8 trillion in less than a year. During the same period, the five biggest tech stocks have seen their market value double.

As financial assets worth $1.1 billion are gobbled up by global central banks every hour, there is irrational exuberance on Wall Street, according to BofA.

Goldman Sachs’ Chief Executive David Solomon and strategists at some major investment banks have since January been warning about stock market volatility, particularly in the immediate future.

Most traditional market-top signals have been flashing amber - just as they did before the bursting of the dotcom bubble two decades ago. But what’s different this time is that interest rates look firmly stapled to the floor for years to come.

Ten-year yields on bonds of G7 countries are hovering near record lows, lending credence to “bubble” naysayers and captured in the hefty ‘equity risk premium’ (ERP) relative to historical averages.

The benchmark U.S. S&P 500 is now the most expensive developed market index based on the price-to-earnings ratio, trading at levels last seen during the dotcom bubble of the late 1990s.

Though Blokland sees rising odds that markets globally end up in a bubble, he said the upcoming cash injections and fiscal spending could further support asset prices.

Some data points below signal higher odds of a bubble:

Sitting at 22-times 12-month forward earnings, the S&P 500 is trading well above its long-term average of just 16x. Other major indexes are also trading above long-term averages, but are still far from S&P’s extreme levels. 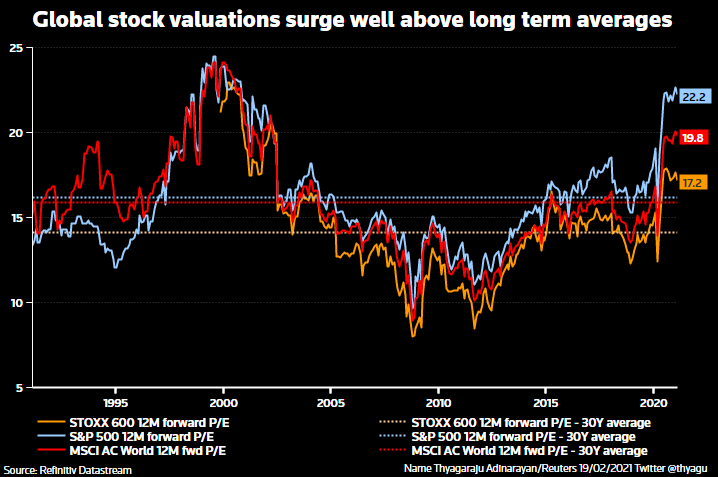 The frenzy is also visible in options markets. The CBOE put-to-call ratio has been pinned at near 20-year lows for eight months now, at levels last seen just before the dotcom bubble burst in 2000. Put options confer the right to sell at a pre-agreed price and calls allow holders to buy. 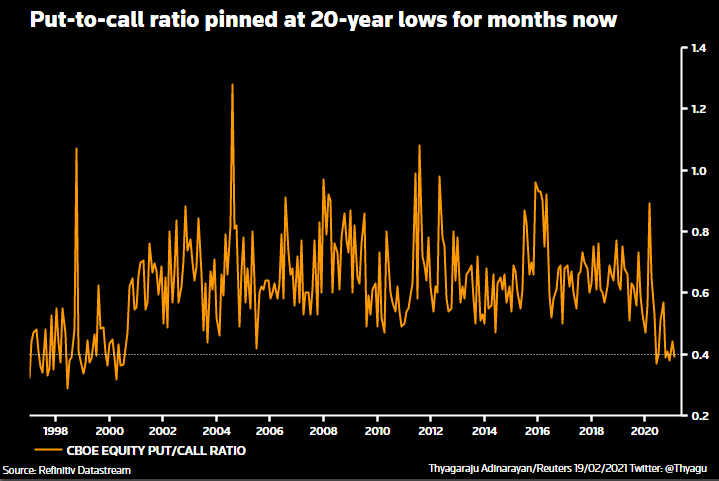 (Graphic: Table on Equity Risk Premium for G7 and China: )

While the reflation trade drives gains in small cap stocks, which fell heavily last year, interest in tech stocks hasn’t abated. That’s built a concentration risk in markets as the sector expands to make up a fifth of all global stocks - the highest since the dotcom bubble of the late 1990s. 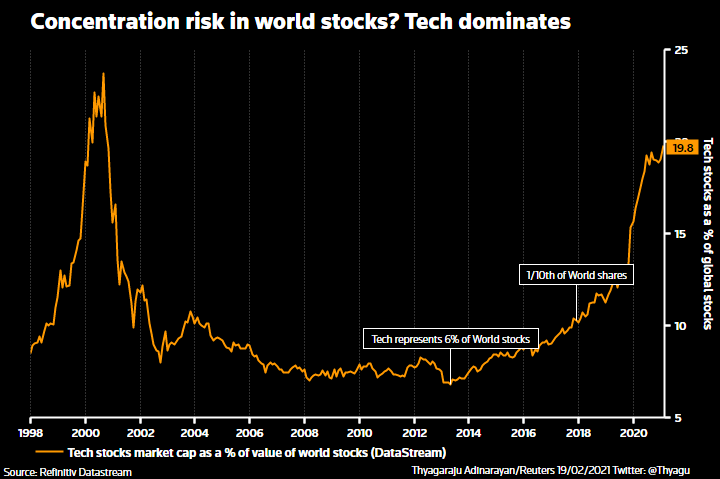 Another indicator is the extent of central bank liquidity support in the system. M2, a measure of money supply that takes into account cash and deposits, jumped sharply last year spawning bubbles in many corners of the markets from bitcoin to high-flying tech stocks. 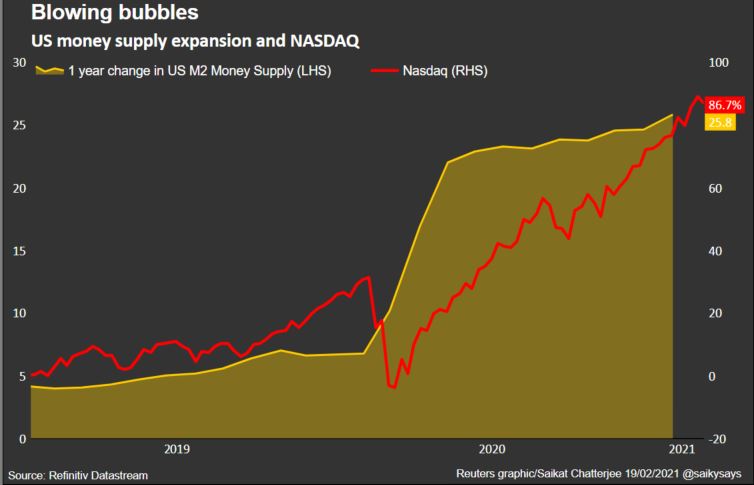 (Graphic: nasdaq and US money supply: )