Could This Be The Next Gold Rush?

EDITOR NOTE: Believe it or not, Biden and Yellen will make for an exceedingly strong “dream team” favoring gold and silver investment. Trump might have been more of a mixed bag, but as for precious metals, the Biden/Yellen effect will likely be much more concentrated, direct, and accelerated. As gold and silver move inversely to the dollar (and inflation), making both a traditional hedge, the Biden/Yellen dynamic duo will likely encourage deficit spending, in turn, exploding debt and collapsing the dollar, creating a rush in precious metals that will push prices through the roof. In short, get ready for the coming gold rush.

You have been warned. The Biden – Yellen (BY)  dream team will fulfil our worst fears of deficit spending, debt explosion and dollar collapse.

Not that a Trump win would have been that much different since the die had already been cast long ago for the final decline of the current financial system.

And the BY duo will be the perfect team to lead the US economy and the rest of the world into perdition. Biden is already an experienced player in deficit spending and massive debt accumulation. And Yellen was there for part of the time printing whatever was required.

When Reagan became president in 1981, US debt was just under $930 billion. It took the combined efforts of Reagan, Bush Sr, Clinton and Bush Jr 28 years to grow the US debt by $10t whilst Obama and Biden managed to grow it by almost the same amount in 8 years.

What we must remember is that the Great Financial Crisis was supposed to have been resolved in 2009. So there should not have been the same pressure to spend money freely when Obama and Biden came to power. But as good socialists Democrats, they threw frugality to the wind and spent recklessly.

The last three years of their reign, 2014-7 they had Yellen as accomplice in her role as Chair of the Fed. So this is a team with deep experience in creating money out of thin air.

When Trump took over in 2017 he had no intention of being outspent or outshone by any previous president. So Trump will have managed to increase the US debt by $8 trillion in just 4 years – a remarkable record!

I don’t believe that anyone back in 2017 forecasted that US debt would be $28t in January 2021, at the end of Trump’s four years. But that was very easy to forecast for anyone who studies history.

Since Reagan became president US debt has on average doubled every 8 years. Thus in an article a few years ago (US debt explosion & Weimar II) I forecasted a debt doubling to $40 trillion by early 2025 and $28t at the half way mark in January 2021. No genius is required for such a forecast nor teams of analysts or economists with supercomputers.

A brief study of history combined with a simple extrapolation is all that is required. But alas that is much too simple a method to take any notice of.

So if Yellen is appointed Treasury Secretary, we have a dream team with extensive executive experience in expanding debt and printing money. Talking about experience, has there ever been a president and treasury secretary whose ages add up to over 150 years? I doubt it and sadly their long money manufacturing experience is the wrong medicine for the US.

Ahead for the new administration lies the arduous task of keeping the sinking “SS US ECONOMY” afloat.

Certainly not an enviable task. Because the end game is virtually certain. Ships can go down very quickly or it can be a long drawn out affair.

This particular ship is already loaded with $80 trillion total US debt of which the government has issued $27 trillion and the Fed printed $7 trillion. Add to that derivatives and unfunded liabilities of at least $1/2 quadrillion. So say a total of $600 trillion in US debt including liabilities that will become debt.

Just as an illustration, $600 trillion in $100 bills would weigh 60 million tons. This weight corresponds to 150,000 747 jumbo jets. With that amount of debt load, no wonder the ship will sink quickly.

It is obviously not surprising that governments are planning to do away with paper money in favour of CBDC (Central Bank Digital Currency). So much easier to stick the total debt of $600t on a small usb stick that weighs a few grams.

EXPONENTIAL PHASE OF QE IS HERE

And that is the way that central banks will try to fool the world, by shrinking the money supply to a binary code of Zeros and Ones in a reset. But even if that does away with paper money, creating a digital currency does not change anything. It will just become a new form of fiat that can be expanded at will but with the same problems as paper money.

What we do know is that the exponential phase of global QE has just started.

Morgan Stanley estimates that for 2021, central banks will print a total of $300 billion per month. This seems much too low, bearing in mind that major parts of the world are in lockdown with 100s of millions of people either furloughed or redundant and with many businesses going under.

The retail and leisure/travel industries for example are haemorrhaging and unlikely to ever recover fully. Thousands of small businesses are also going under every month.

QE in 2021 will not only be used for more support to the undeserved banking system. Also individuals and businesses will be direct beneficiaries of QE as Biden and Harris subscribe to MMT (Modern Monetary Theory).

Thus the money printing bonanza in 2021 is likely to far exceed the 2020 levels. This will not only put enormous pressure on the financial system, but will also be reflected in a collapsing dollar.

The biggest problem is the massive amount of treasuries being issued in 2020 and 2021 only has one buyer. The old buyers of US debt, China, Japan, Russia, Saudi Arabia etc are seeing the writing on the wall and are no more interested in buying depreciating dollar treasuries.

FED THE LAST MAN STANDING – US$ THE FIRST CURRENCY FALLING

So the last man standing is the Fed and this is why Yellen is perfect for the job as Treasury Secretary. With her Fed experience she will, with ease, plan for the biggest monetising of US debt in history.

Initially the dollar will be the biggest victim as an ever increasing amount of dollars are created. Many currency observers watch the dollar index. But since this is not really a traded currency, I prefer the EUR/USD spread. The euro against the dollar is the commodity with the biggest trading volume in the world at $1.5 trillion a day. The S&P daily volume is around $150 billion and US treasuries $500b.

Below is a table of daily trading volumes that I have shown before (EUR volume not included). This chart was shown to point out that daily trading volume in gold is 850x daily mine production and twice as big as the S&P volume. I will not go into this table in detail here but suffice it to say that this massive gold trading by the bullion banks is a clear sign that they have major problems to balance their positions due to the naked paper gold shorts. 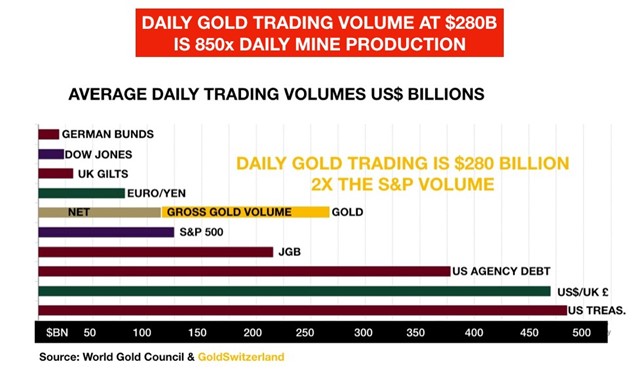 Coming back to the Euro-Dollar, this chart is now very bullish for the euro and thus bearish for the dollar. After a 12 year correction, the Euro is now breaking out on the upside against the dollar and looks very bullish. The Euro is already up 14% this year and is likely to strengthen considerably in 2021 as the dollar falls rapidly. 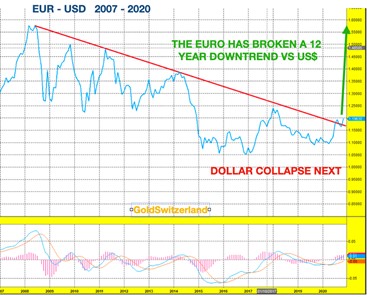 NO PRIZE FOR BEING FIRST TO THE BOTTOM

Many observers question how the euro can strengthen with the major problems within the EU combined with the ever growing ECB balance sheet. What most people don’t understand is that the Euro is not strong in itself. Measuring currencies against each other is a mug’s game. If two currencies are dying, there is no absolute advantage in dying slightly more slowly and being the second to the bottom. It is only a matter of relative timing since currencies can’t all fall against each other at the same rate.

It doesn’t really matter which currency wins the race since there is no prize for being first to the bottom. The fallacy is of course that currencies should not be measured against each other but against real money that over time has maintained its purchasing power.

And the only money that has survived in history in its original form is of course gold. All other currencies have gone to zero. The chart below shows what has happened to all currencies against gold in the last 100 years. This pattern has repeated itself throughout history.

MEASURE WEALTH IN GOLD AND NOT IN DELUSIONAL DOLLARS

So if you measure your money in depreciating dollars or euros, you are deluding yourself. It is like slowly sinking in quicksand. There is no support and no way out.

So prepare for massive QE, a rapid dollar fall with a US and world economy in severe decline in 2021. There will be no recovery for years and maybe for a decade or more.

GET READY FOR THE COMING GOLD RUSH 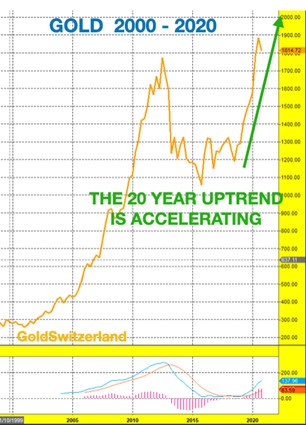 Your best friend and protector in this ignominious company of bubble assets and falling currencies are precious metals in the form of physical gold and silver.

But please ignore PAPER gold and silver (including ETFs) which one day will be worthless.

On the opposite side of the collapsing dollar stands gold which is about to start an accelerated rise.

Gold (and silver) has now completed the correction since August and is about to resume its 20 year uptrend.

The strength of the next move will take the gold market by surprise. And remember that gold is for long term wealth preservation and not for speculation.