EDITOR'S NOTE: The markets rallied strongly last week following the Employment Situation report (aka, the Jobs Report). The number of jobs created seemed to fall within a “Goldilocks” range—not too hot and not too cold. This boosted investor sentiment, confirming hopes that inflation may indeed have peaked. We’ve got quite a few releases this week that are about to test the mettle of the markets; among them, are financial sector earnings and Federal Reserve speeches. But perhaps the biggest one will be Thursday’s Consumer Price Index report (CPI). Remember that a drop in any given inflation reading can be followed up by a sudden upset in the form of an unexpected spike. We saw this throughout the 1970s. Will this week’s CPI inflation reading confirm the peaking narrative and ease investor fears, or are we heading for a major upset? Read on to see the full list of what’s ahead.

Hot on the heels of last Friday’s US payrolls report will be Thursday’s release of US December CPI inflation data. As previewed by Rabobank, the market is expecting the headline figure to moderate further to 6.5% y/y from 7.1% the previous month, with the core number also expected to ease from 6.0% to 5.7%. Bolstering the disinflation case, moments ago the latest Manheim used car index update came in at 219.3, down 14.9% from a year ago: "This was the largest annualized decline in the series’ history."

Another inflation-related data point will come from the University of Michigan survey on Friday, where the gauge of consumer inflation expectations will be in focus. Other US data releases will include consumer credit (DB forecast +$30.5B vs +$27.1 in October) today and the NFIB small business optimism index on Tuesday.

A smattering of Fed officials is scheduled to speak during the week, which will allow the market to assess the impact of the de-acceleration of earnings growth on policymakers’ respective policy outlooks.

A summary of key US events this week: 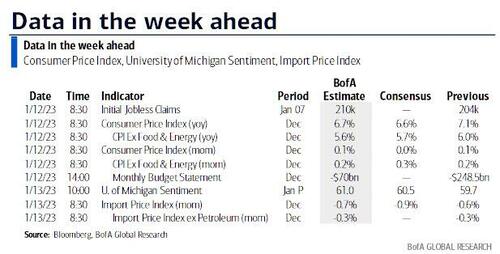 Several ECB officials are also speaking during the week. Speculation regarding scope for a less  aggressive policy stance has not just been reserved for the Fed. Last week’s softer Eurozone CPI inflation data had already ignited a debate about whether the ECB needs to maintain the ultra-hawkish tone on display at its December policy meeting.

Joining the fray this week will be BoE Governor Bailey. Two of the MPC last month would have favored leaving rates on hold. Insofar as the UK is already in a recession, which the Bank expects to last all year, investors have also started to debate the risks of a smaller than previously expected amount of policy tightening in the UK. The week ahead also brings UK monthly GDP data for November, which is expected to show a -0.3% m/m contraction. Monday is also expected to bring talks aimed at ended rail strikes, while yesterday PM Sunak indicated a willing to discuss pay rises for nurses, who have also been striking. However, press reports suggested that UK junior doctors could be balloted on strike action this week while the doctors’ union could open the possibility of strike action by NHS consultants. Further strikes by ambulance drivers have also been mooted. The news coincides with reports that UK ambulance wait times have hit a new record.

German November production data registered a softer than expected 0.2% m/m, with a downward revision to the previous month’s data. Later today Eurozone unemployment numbers are due for release. Tonight, Tokyo December CPI inflation will be watched in view of the ‘will they, won’t they’ debate leading up to the BoJ’s January 18 policy meeting. At the end of the week, Eurozone production data will be released. Corporate earnings season is due to start this week. This could present a test to the optimism injected by last week’s US jobs data.

Turning to earnings now and some of the largest American banks including JPMorgan, Citi and BofA will kick off the earnings season on Friday. We will also hear from BlackRock and UnitedHealth that day. The day before all eyes will be on results from TSMC as concerns over supply-demand dynamics and US-China tensions continue to weigh on the sector, with the Philadelphia semiconductor index down -35% in 2022.

Courtesy of DB, here is a day-by-day calendar of events

Finally, looking at just the US, Goldman notes that the main events are the CPI report on Thursday and the University of Michigan report on Friday. There are several speaking engagements from Fed officials, including remarks from Chair Powell, as well as presidents Bostic, Daly, Harker, and Bullard