EDITOR'S NOTE: While some are disseminating the notion that the trillions of dollars in pandemic-related stimulus led to fat savings accounts in the U.S., that just isn’t true for the bottom 80% (read: average Americans) of the country. While the wealthiest people who received stimulus from the government may have saved it, Zero Hedge reports that data suggests that money is gone from most Americans’ bank accounts at the end of 2021. This article notes that “[Bank of America] chief economist Michelle Meyer observed that spending on credit cards among the lower-income cohort has spiked with a 23% growth rate over a 2-year period, up from the summer average of 15%.” This increase in credit card spending coincides with a decrease in debit card spending which BofA believes suggests is resulting from “the loss of income support from the expiration of unemployment benefits (UI) which has disproportionally impacted the lower-income population." Also, while not directly related, this BofA report shows an interesting trend where spending and economic growth is happening in places like Florida, a state with fewer mask mandates and business restrictions, than states like New York that go heavy on both.

Last week we explained why the widely propagated myth that there is north of $2 trillion in "excess cash" savings spread evenly across the US population courtesy of Biden's trillions, was nothing but a fake pipe dream: as we showed then when looking at cash holdings (checkable deposits and currency) from 1Q20-1Q21 across the income distribution, 65% of excess cash (cash accumulated above the 4Q19 level) is held among the top 20%, while just 35% was spread across the entire bottom 80% (the top 80% holds ~$1.4tn in excess savings and bottom 80% holds ~$800bn).

And in light of the recent feverish pace of consumer spending among the bottom 80%, we also said that much if not all of these cash savings had been spent.

When looking at its latest debt and credit cars spending data, BofA chief economist Michelle Meyer observed that spending on credit cards among the lower income cohort has spiked with a 23% growth rate over a 2-year period, up from the summer average of 15%. 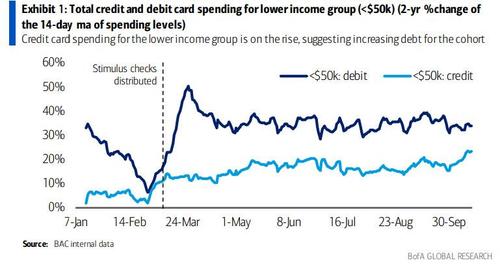 And, obviously, with consumers ramping up their charging it means that their bank accounts (where those mythical excess savings would be found) this surge in credit card spending has come at the expense of debit card spending growth which has slowed notably over the last several weeks.

According to Bank of America, this growing reliance on credit cards reflects "the loss of income support from the expiration of unemployment benefits (UI) which has disproportionally impacted the lower income population." Indeed, UI recipients in the lower income cohort reduced spending meaningfully, with the 2-year growth rate falling to 11% from 31% prior to the expiration in early Sept. 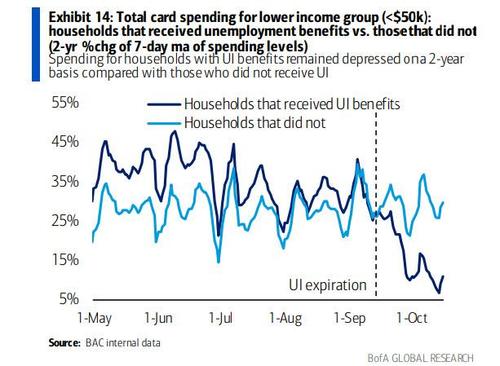 And while it may not be directly linked to consumers savings running out, BofA also highlights another curious observation, one we touched upon last week: as the chart below shows, there has been a growing divide between spending trends across the country. Among the strongest is Florida where total card spending is up around 25% over a 2-year period. This contrasts with CA and NY, for example, with growth of 20% and 18%, respectively, over a 2-year period for total card spending. 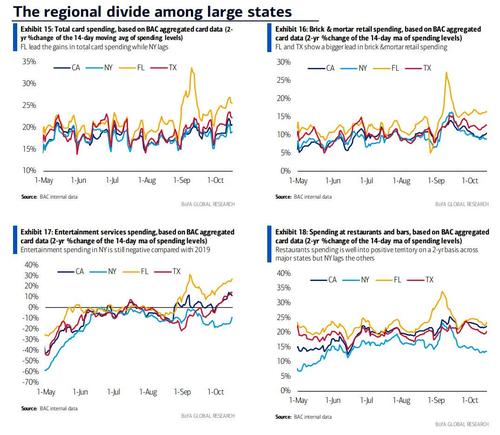 The gap started with the Labor Day holiday which aligned with the peak in COVID cases nationally. This is the direct result of Florida having some of the fewest restrictions due to covid among all states, which not only has led the state to see a dramatic plunge in covid cases as natural immunity has surged...

... but also to a healthy boost for the local economy, while at the same time paranoid New York snowflakes refuse to step out over mortal terror that the Chinese virus just can't wait to penetrate their 3 mask layers and to kill them all.