Cryptoexchange Binance Under Investigation by IRS and DOJ

EDITOR NOTE: Whether Binance, the world’s largest cryptocurrency exchange, is turning a blind eye to money laundering or has any connection with the $5 million ransom paid in cryptos to DarkSide for its Colonial Pipeline hack--those are among the issues under investigation by the IRS and the DOJ. Cryptocurrencies may not see widespread adoption as a medium of exchange anytime soon. And given their volatility, they might not make much of a store of value, let alone a safe haven. But they work well as ultra-speculative assets and money laundering tools. Cryptocurrency investments bring up a host of questions, all of which are generally unanswerable, as the fundamental nature of each crypto is largely inadequate, unknown, and in constant flux. Crypto exchanges, particularly those operating beyond the reach of US regulators, are even less known. And if we can’t even trust regular banks, many of which have profited off customers through means that either blatantly or borderline fraudulent--despite tight regulations--then how can we trust cryptocurrency exchanges?

Update (1415ET):  Finally, CZ has seemingly weighed in on today's controversy with an oblique tweet.

Update (1350ET): With the price of bitcoin still in the red, Binance issued a statement on twitter claiming that it has built robust systems to combat money laundering and other financial crimes, and that it will cooperate, and has cooperated, with authorities whenever asked, including in the US.

We take our legal obligations very seriously and engage with regulators and law enforcement in a collaborative fashion. (1/3) https://t.co/68UB1InOBK

We have worked hard to build a robust compliance program that incorporates anti-money laundering principles and tools used by financial institutions to detect and address suspicious activity. (2/3)

We have a strong track record of assisting law enforcement agencies around the world, including in the United States. (3/3)

Meanwhile, as crytos including ethereum have started to rebound, reporters are doubling down on the FUD as Fox Business's Charlie Gasparino promises a big reveal at 1400.

BREAKING: Crypto investors have a new worry on their hands as regulators begin to focus on the environmental concerns of $BTC mining following comments by @elonmusk will discuss at 130pm @FoxBusiness

It's not a good day for cryptos which after being hammered earlier on the Elon Musk reversal, just legged lower after a Bloomberg report that the world's biggest cryptoexchange Binance is under investigation by the Justice Department and Internal Revenue Service. 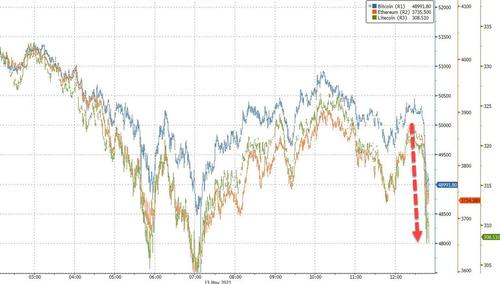 The report notes that "officials who probe money laundering and tax offenses have sought information from individuals with insight into Binance’s business." Though, while many traders were panicked by the headline, the report clearly states that Binance isn't facing any charges or fines - at least, not yet.

Binance - which is led by Changpeng Zhao, "a charismatic tech executive who relishes promoting tokens on Twitter and in media interviews" - is incorporated in the Cayman Islands and has an office in Singapore but says it lacks a single corporate headquarters. Chainalysis Inc., a blockchain forensics firm whose clients include U.S. federal agencies, concluded last year that among transactions that it examined, more funds tied to criminal activity flowed through Binance than any other crypto exchange.

To be sure, in the aftermath of the Colonial Pipeline ransomware hack - where we learned that the hackers were immediately paid $5 million in crypto - it was virtually inevitable that there would be some blowback.

“We take our legal obligations very seriously and engage with regulators and law enforcement in a collaborative fashion,” Binance spokeswoman Jessica Jung said in an emailed statement, while adding that the company doesn’t comment on specific matters or inquiries. “We have worked hard to build a robust compliance program that incorporates anti-money laundering principles and tools used by financial institutions to detect and address suspicious activity.”

Meanwhile, Zhao has said Binance closely follows U.S. rules, blocks Americans from its website, and uses advanced technology to analyze transactions for signs of money laundering and other illicit activity. Last year, the firm warned that U.S. residents would have their accounts frozen if they were found to be trading, crypto trade publications have reported.

Bloomberg notes that along with the CFTC, the Justice Department is likely to examine steps that Binance has taken to keep U.S. residents off its exchange. One person familiar with Binance’s operations said that prior to the establishment of Binance.  Americans were advised to use a virtual proxy network, or VPN, to disguise their locations when seeking to access the exchange.

Jung, the Binance spokeswoman, said the exchange has never encouraged US residents to use VPNs to get around its rules, as doing so would be something “that has always been contrary to our company’s principles.” In January, Zhao tweeted that Binance’s security systems block Americans even if they try to connect through one of the networks.

"We have implemented strong access controls that have been tested via external audit and are under continuous review and evaluation by Binance to ensure that the appropriate restrictions are in place and are effective," Jung said.

While the subject of the DoJ and IRS investigation wasn't revealed, Bloomberg's sources said the investigation is being led by the DoJ's bank integrity unit, which probes complex cases targeting financial firms. The scrutiny from the IRS is a separate issue, and has reportedly been going back months. Whatever has been happening, the revelation that a ransom payment was made in crypto means authorities are bound to try and follow the digital trail (the blockchain is open to public scrutiny, after all).

With investigators knocking, Binance clearly stepped up its presence in Washington and retained a former Treasury Department official and top white-collar defense lawyers to represent it in legal cases and matters being reviewed by regulators. In March, the firm hired former Sen. Max Baucus, a well-connected Montana Democrat, to advise it on policy and government relations.

This isn't the first time US regulators have launched an investigation into Binance. Back in March, Bloomberg reported that the CFTC was investigating whether Biannce, which isn't registered in the US and thus doesn't allow Americans to trade, allowed US residents to buy and sell derivatives that the CFTC regulates.

It was perhaps the first ripple of what many fear might be a bigger crackdown in the US, as prosecutors come after one of the world's biggest exchanges that they effectively helped criminals cripple the American energy infrastructure, an economic strike against American civilians.