EDITOR NOTE: We hear a lot about deflation and inflation but “stagflation,” though mentioned occasionally, is something that’s not on the mainstream media’s radar. On the other hand, it sort of makes sense. Stagflation is a period of both high inflation and high unemployment. We’ve got one of the two, so far. According to this author, the December Purchasing Managers’ Index reveals that new orders are dropping significantly while the cost of business “inputs” continue to rise. Is this a temporary blip, or early shoots of a much wider and longer-term problem? If the job market doesn’t gain steam by the time inflation arrives, then we’ve got a stagflationary scenario--a double whammy which will not only extend but deepen the current crisis.

Markit’s preliminary December PMIs were released today and our takeaway is that they show the risk of some kind of stagflation is gaining a little steam. In both the manufacturing and services surveys, new business/new orders dropped while input prices rose. In the case of the services PMI, input prices rose to the highest on record for the second straight month. In the manufacturing survey, input prices rose to the highest level since mid-2018, just after the tax deal was inked. When such divergences persisted in the past it was prices that caught down to business activity. Will it be so this time around, or will prices continue to increase regardless? Currently, the bond market is voting on the latter scenario, which is why we continue to keep our eye on breakeven inflation expectations. 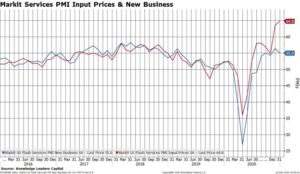 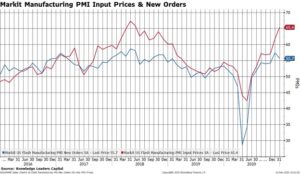