EDITOR'S NOTE: The confirmation of President Biden’s anti-bank nominee for Comptroller of the Currency Saule Omarova looks like it will be blocked five Democrat Senators —Jon Tester (D-MT), Mark Warner (D-VA), Kyrsten Sinema (D-AZ), Mark Kelly (D-AZ), and John Hickenlooper (D-CO) — who oppose the Russian-born economist. However, progressives who love Omarova are pushing Biden to use a loophole to get her into power. Axios reports that “the White House could name Omarova first deputy comptroller, a position that does not require confirmation.” This would mean she would replace Acting Comptroller Michael Hsu and effectively be in control of the agency with no Congressional approval. She could then run the agency for as long as Biden wants her to, as the Vacancies Reform Act of 1998 does not cover the Comptroller of the Currency position. If Biden does this, and even if he nominates someone else for the top position, Omarova would still wield an incredible amount of financial power in the U.S.

Saule Omarova, whose nomination is in trouble partly due to progressives’ botched defense, could be appointed as first deputy and run the OCC in an acting capacity.

Five Democrats plan to block the confirmation of Saule Omarova, President Biden’s nominee for Comptroller of the Currency, who is widely seen as a tough-on-banks pick at an agency that has long been captured by Wall Street.

Three of the Democrats—Sens. Jon Tester (D-MT), Mark Warner (D-VA), and Kyrsten Sinema (D-AZ)—voted for a 2018 bank deregulation bill that Omarova criticized at the time. By opposing Biden’s pick to regulate major banks, they are joining hands with the bank lobby, which has led an unusually intense opposition campaign against the Cornell law professor. Sens. Mark Kelly (D-AZ) and John Hickenlooper (D-CO) have also indicated they would vote against Omarova.

Following the news, which was reported the day before Thanksgiving by Axios, several progressives proposed a solution: The White House could name Omarova first deputy comptroller, a position that does not require confirmation.

Omarova could replace Acting Comptroller Michael Hsu, effectively putting her in charge of the agency, since Biden would not need to nominate a Senate-confirmed comptroller to the top job, said Yevgeny Shrago, a policy analyst with the advocacy group Public Citizen.

The move has recent precedent. Two comptrollers under President Trump’s, Keith Noreika and Brian Brooks, were never confirmed, but led the agency as acting comptrollers. Hsu has served as Acting Comptroller for more than six months.

Biden should do the same with Omarova, Shrago said. She could be selected as deputy comptroller, making her acting director with all the powers of a full chair.

Omarova could run the Office of the Comptroller of the Currency (OCC) indefinitely as acting comptroller, according to Jeff Hauser of The Center for Economic and Policy Research. While the Vacancies Reform Act of 1998 limits how long some acting officials can remain in a position, it does not apply here, Hauser said. Instead, the National Bank Act gives the Treasury Secretary full authority to designate a first deputy without a fixed limit. John Walsh was acting Comptroller of the Currency from 2010 until 2012—longer than the 210 day maximum in the Vacancies Act—providing further recent precedent for the move.

Even if the White House did subsequently nominate and confirm a comptroller, Omarova could still wield considerable power as the OCC’s second-in-command. It wouldn’t be the first time the White House found a workaround after a favored pick proved to be a lightning rod in confirmation.

Neera Tanden withdrew from consideration following searing confirmation hearings after she was tapped for budget director. But Tanden, who is the extremely online former president of a liberal think tank, may now have more influence as a senior advisor to the White House, where she has been assigned the gnarly job of generating support for Build Back Better agenda.

Other examples abound. In 2015, after Elizabeth Warren successfully resisted the nomination of investment banker Antonio Weiss for a top job at the Treasury, Barack Obama gave Weiss a non-confirmable position as a senior counselor at Treasury, from which he was given wide latitude to design Puerto Rico’s punitive debt restructuring.

Hsu, the Acting Comptroller since May 10, came to the OCC from the Federal Reserve, which has become a top supplier of regulators to the Biden administration. Treasury Secretary Janet Yellen and other top Treasury officials come from the central bank, which some progressives say is more conservative and cosier with Wall Street than Democrat-led regulatory agencies.

“I am very worried about having Fed group-think among the banking regulators,” Todd Phillips, bank regulation director at the Center for American Progress, tweeted on Wednesday.

“Nothing is stopping them from designating Omarova as Acting Comptroller,” he added.

The news that Omarova is unlikely to overcome opposition in the Senate comes days after Biden reappointed Jerome Powell, a Trump-appointed Republican, to serve as chair of the Federal Reserve, over the objections of progressives.

Supporters of Omarova questioned why the White House did not strike a deal with the senators who opposed her pick. Tester, who was a prominent backer of Powell, was also among Omarova’s loudest critics.

Banking committee chairman Sherrod Brown (D-OH) fought for Omarova, but is simultaneously engaged in a fight to put Lisa Cook on the Fed’s Board of Governors and is negotiating for additional housing funding in Build Back Better, two goals which may have detracted from pushing through Omarova.

OMAROVA’S CONFIRMATION SANK into a brawling match over her identity, and a meta-argument over whether her identity was relevant to the debate.

A newsletter by the Bank Policy Institute’s chief executive called attention to Omarova's birth in Kazakhstan and to her college scholarship, which was called the Lenin Personal Academic Scholarship. At the hearing, Republicans debated the appropriateness of referring to her personal background. “I don't know whether to call you ‘professor’ or ‘comrade,’” Sen. John Kennedy (R-LA) said.

Democrats happily accepted those terms of the debate, responding indignantly to Republican red-baiting and emphasizing, by way of contrast, Omarova’s “historic” status as a female immigrant.

In his opening comments and in a key press release issued on the morning of the Senate hearing, Brown led with the “historic” nature of Omarova’s candidacy. “Professor Omarova will be the first woman, first person of color, and first immigrant to serve as the Comptroller of the Currency,” Brown said before mentioning any substantive reason she had been picked for the job. 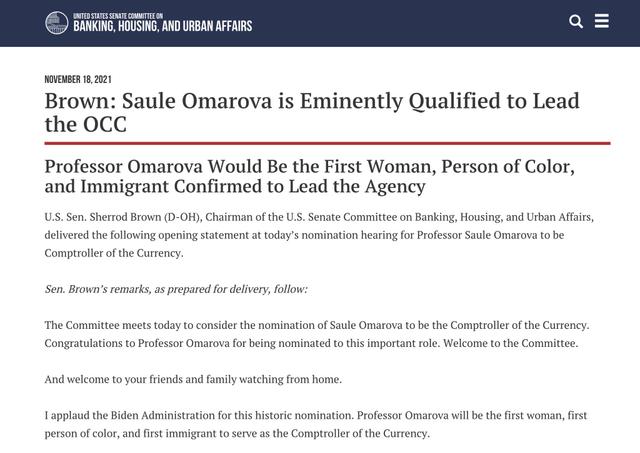 An eleventh-hour press release by Sens. Mazie Hirono (D-HI) and Tammy Duckworth (D-IL) also blessed her tripartite minority status (woman, immigrant, and “person of color,” which is how liberal Americans describe Omarova’s roots in Kazakhstan). In response to Axios reporting that her nomination was in trouble, a White House official told the outlet that it “continues to strongly support her historic nomination.” Others drew parallels between Omarova’s grilling and the fact that Lael Brainard was not awarded the top job after being considered for Fed Chair. (She was nominated instead for the vice chair position.)

“The amount of sexist double standards in these nomination efforts this year has been pretty staggering,” Todd Tucker, a political scientist at the Roosevelt Institute, remarked following Omarova’s hearing.

Now that the identity-centered campaign for Omarova has failed, it may be worth looking back on its limitations.

If you speak with law professors and financial regulators, you will hear that Omarova is indeed a historically unprecedented nominee for comptroller—not because of her physical appearance, but because she is an unusually sharp and plainspoken critic of the bank industry.

She led research into physical commodity trading by big banks like Goldman Sachs and Morgan Stanley, publishing detailed and original research into their buying up of assets like oil, gas and metals from distressed firms.

Omarova’s pioneering work on reining in Wall Street abuses—as well as her criticism of Tester and Warner’s deregulatory agenda—was the real reason moderates scuttled her nomination. But that dispute was buried in a blitz of coverage focused on her alleged victimization.

“If confirmed, Omarova would be the first woman, the first immigrant and the first person of color to lead the 158-year-old agency,” the Washington Post dutifully recites in its story on the hearing, which focuses on Kennedy’s offensive comments. Only the last two paragraphs of the story mention that partisan sniping is “likely less consequential to her fate than the decision-making by a pair of moderate Democrats” who resent her past objections to their deregulation of banks.

By shrilly and insistently proclaiming over objections that Omarova is “eminently qualified,” Democrats and liberal media outlets ended up protesting too much.

In that ear-splitting environment, it was easy for bank-friendly moderates to step in, brows furrowed, and in one smooth motion condemn the ad hominems while raising reasonable-sounding concerns about her record. Given progressives’ screeching and largely irrelevant defense of Omarova, you could be forgiven for missing that those concerns are counterfeit.

Originally posted on The American Prospect.