Dollar Debt - A Closer Look At The Unrecorded $65 Trillion EDITOR'S NOTE: In addition to the rise in American household debt, likely caused by the rising cost of living, the US has another debt problem: $65 trillion in unrecorded dollar debt sloshing around in the global economy. Why is it a big deal? Well, it’s equivalent to more than half of the “global” GDP, and it's all in dollars. Who, exactly, is holding this debt? What might be its impact on the US economy if the entities that owe fail to hold up their end of the agreement? And how might such an event spill over to the global financial system? Read on to get a refresher on the global shadow banking phenomenon and how its risks, potentially devastating as they are, always go under the radar of public awareness.

The scale of hidden dollar debt around the world is huge.

As Visual Capitalist's Dorothy Neufeld details below, no less than $65 trillion in unrecorded dollar debt circulates across the global financial system in non-U.S. banks and shadow banks. To put in perspective, global GDP sits at $104 trillion. 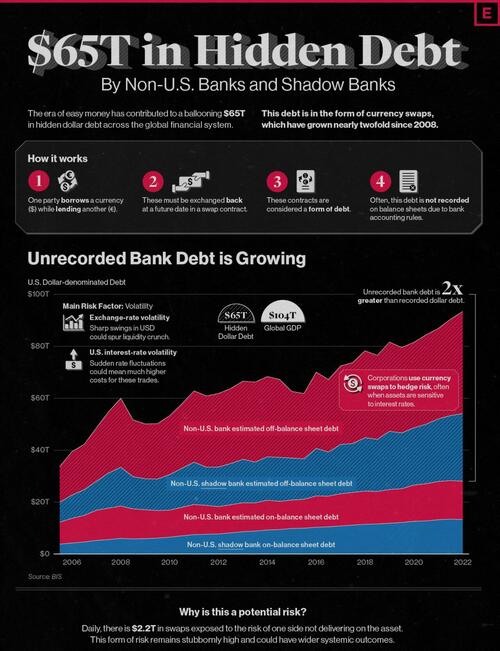 Based on analysis from the Bank of International Settlements (BIS), the above infographic charts the rise in hidden dollar debt across non-U.S. financial institutions and examines the wider implications of its growth.

To start, we will briefly look at the role of foreign-exchange (forex) swaps in the global economy. The forex market is the largest in the world by a long stretch, with trillions traded daily.

Some of the key players that use foreign-exchange swaps are:

To understand forex swaps is to look at the role of currency risk. As we have seen in 2022, the U.S. dollar has been on a tear. When this happens, it hurts company earnings that generate revenue across borders. That’s because they earn revenue in foreign currencies (which have likely declined in value against the dollar) but end up converting earnings to U.S. dollars.

In order to reduce currency risk, market participants will buy forex swaps. Here, two parties agree to exchange one currency for another. In short, this helps protect the company from unfavorable foreign exchange rates.

What’s more, due to accounting rules, forex swaps are often unrecorded on balance sheets, and as a result are quite opaque.

A Mountain of Debt

Since 2008, the value of this opaque, unrecorded dollar debt has nearly doubled. 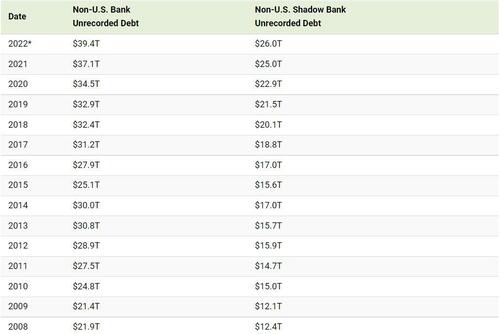 Driving its rise in part was an era of rock-bottom interest rates globally. As investors sought out higher returns, they took on greater leverage—and forex swaps are one example of this.

Now, as interest rates have been rising, forex swaps have increased amid higher market volatility as investors look to hedge currency risk. This appears in both non-U.S. banks and non-U.S. shadow banks, which are unregulated financial intermediaries.

Overall, the value of unrecorded debt is staggering. An estimated $39 trillion is held by non-U.S. banks along with $26 trillion in overseas shadow banks around the world.

Why does the massive growth in dollar debt present risks?

During the market crashes of 2008 and 2020, forex swaps faced a funding squeeze. To borrow U.S. dollars, market participants had to pay high rates. A lot of this hinged on the impact of extreme volatility on these swaps, putting pressure on funding rates.

Here are two examples of how volatility can heighten risk in the forex market:

In both cases, the U.S. central bank had to step in to provide liquidity in the market and prevent dollar shortages. This was done through pumping cash into the system and creating swap lines with other non-U.S. banks such as the Bank of Canada or the Bank of Japan. These were designed to protect from declining currency values and a liquidity crunch.

The risk from growing dollar debt and these swap lines arises when a non-U.S. bank or shadow bank may not be able to hold up their end of the agreement. In fact, on a daily basis, there is an estimated $2.2 trillion in forex swaps exposed to settlement risk.

Given its vast scale, this dollar debt could have greater systemic spillover effects. If participants fail to pay it could undermine financial market stability. Because demand for U.S. dollars increases during market uncertainty, a worsening economic climate could potentially expose the forex market to more vulnerabilities.