Don’t Sleep On Silver, Prepare For A Super-Spike

EDITOR’S NOTE: So, what comes after the massive gold and silver rout? According to the Morgan Report’s David Smith, it isn’t going to be a mere recovery rally but a moonshot super spike. He lays out a strong set of fundamental arguments as to why this might be expected. On the technical side, if you look at gold and silver on a monthly chart, the spike for silver is likely to happen first, as silver currently occupies a critical buy level (if you believe in using Fibonacci retracement measurements). Also, silver, perhaps the most beaten down of the metals “offers the largest potential percentage rise of them all,” according to Smith. Regardless, one can argue that its potential as both a monetary and industrial metal just makes sense as a smart investment. But given its circumstances and the tendency for investors to buy when on the extreme upside and to sell in a panic on the extreme downside (opposite of what institutional investors do), Smith may be right in that most investors will, once again, miss out on this opportunity. If there’s any guarantee in the markets, this pattern of buying and selling tends to be predictable, and therefore always an opportunity for any investor with a contrarian mindset. 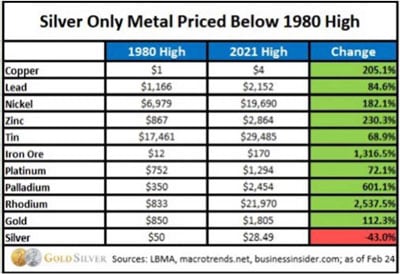 What if we are on the cusp of an "economic singularity"?

"... in which the laws and bedrock beliefs that formed the foundation of international economic order for decades, breaks down, with unknowable consequences. "If a central bank's foreign reserves (i.e. Russia's $630B) can be blocked/frozen, "Barring gold, these assets are someone else's liability - someone who can just decide they are not worth holding." -Doomberg. (The SWIFT expulsion and confiscation of assets without due process...)

Luke Gromen, of the macroeconomic research firm FFTT sums it up:

In my strongly considered opinion -- from the position of having continuously observed, researched and participated in these markets since 1974 -- that "moment" is just about here...

Not getting through the "All assets are (currently) in collapse" mode. In this transformation back to some predictability you must adroitly and with controlled emotion readjust our "reset" ourselves.

“… the economy is already in recession. The Fed’s own data shows GDP growth went negative in 1Q22. And it’s barely positive thus far in 2Q22. Even if the Fed massages the data to insure we don’t see two quarters of negative GDP growth, the reality is that the markets are telling us a recession is here now.” -Gram Summers

Lest you persist in believing that gold is destined to remain in stupor, consider that underplaying the tectonic drivers pressuring its sooner-rather-than later upside breakout; or much worse, wait until it actually happens (!) you will need to Act.

Jim Rickards' analytical mastery has identified both the ready acceptance of other non- Western countries to buy it (thereby decreasing dependence on a dollar-first profile, as well as the post-Invasion Swiss refineries' movement back to "neutrality" in accepting Russian gold for refining, to back its digital and commodity trading scheme.

No one of these stories will quickly spike the price of gold. Still, all of them reveal the shape of things to come. They all point in the direction of more reliance on gold as a form of money, and the diminution of the role of the dollar in a global monetary system. Think of these developments as straws in the wind. You know the storm won’t be far behind.

For 8 years, I (David H. Smith), Senior Analyst at The Morgan Report, LODE Digital Silver and Gold Ambassador, and frequent Contributor to The Prospector News, have enjoyed interacting with the rapidly expanding audiences from Money Metals Exchange and associated contributing sites, including three of the most widely read, Bob Moriarty's 321gold.com and GoldSeek/SilverSeek.com as we keep working to build out our unique yet similar paths to financial success we all seek. BEST!

What's Wrong With The World? Let's Count The Ways.

Why Empires Decline: A Lesson For The US Government

Should AI Be Used For Human Censorship? The WEF Says Yes.

Everything You Need To Know About The Inflation Reduction Act