EDITOR'S NOTE: What you’re about to read below lays out a messy global conundrum. There’s no doubt that in the last few days, the UK is experiencing extreme heat levels never before seen in that region of the country as with parts of Europe, all undergoing a dangerous and perhaps unprecedented heat wave. There’s a difference between a) not believing in climate change, and b) not agreeing with the manner in which governments across the globe are handling it. The Dutch farmers in the article below likely belong to the latter. They feel that their government’s nitrogen emission reduction policies are structured so unfairly that the policies pose an existential threat to individual farmers. Plus, Dutch agriculture is among the most productive per acre in the world and, according to some experts, contributes more good to the environment than it does harm. Yet, the government dismisses that perspective. And so farmers are taking to the streets in a strong act of civil disobedience. What’s at stake here is not just farming rights and farmers’ livelihoods but the capacity for a government to seize private property by force under a “greater good” pretext. And as the world’s weather patterns deviate from seasonal norms, and as governments work to assert their power over citizens and private businesses, will the Dutch revolt mark the beginning of a more global movement toward civil unrest?

A series of farmer-led demonstrations against a government climate rule in the Netherlands could be the beginning of a global movement, according to experts interviewed by Fox News Digital.

The Dutch government issued a plan in June laying out nitrogen emission reductions, largely targeting the nation's agriculture industry which produces an outsized shared of such emissions, according to a report from the U.S. Department of Agriculture's Foreign Agricultural Service (FSA). The government, though, directly acknowledged that "there is not a future for all" farmers to continue their business under the proposal.

In response, farmers throughout the country have reportedly taken to the streets in recent weeks, blocking roads to airports and deliveries to food distribution depots. A State Department spokesperson said in a statement to Fox News Digital that the U.S. is monitoring the situation and encouraging both sides to reach an agreement soon.

"I really understand their anger," Marcel Crok, a Dutch science writer and co-founder of the Climate Intelligence Foundation, told Fox News Digital in an interview. "The farmers are also angry because they say, ‘we are the only sector who get all the blame.’ What about industry? What about the traffic? Maybe we should just ban all the cars in the Netherlands because they also emit [nitrogen]."

"This plan in practice means that, in certain areas, farmers have to reduce their nitrogen emissions by 70%," he continued. "That means they simply have to quit."

DUTCH POLICE SHOOT AT TRACTOR DURING NIGHT OF FARM PROTESTS

The proposal to sharply cut nitrogen emissions is tied to a 2019 Dutch court decision forcing the nation's government to take more aggressive measures to curb nitrogen emissions. The Netherlands, though, has heavily regulated agriculture emissions since the 1990s and farmers have largely complied with such rules, Crok said.

The Netherlands emits a large quantity of nitrogen because of its massive agriculture industry which accounts for about 87% of the country's 124 million kilograms of annual ammonia emissions, the FSA report showed. The nation exported a whopping $26.8 billion worth of food products despite having a relatively tiny population compared to other major producers, according to World Bank data.

"It is not very rational to curb the Dutch agriculture if you realize that they have the highest production per acre in the world and therefore the environmental load per kilogram food is lower than elsewhere," Simon Rozendaal, a Dutch journalist and chemist, told Fox News Digital. "So, in a sense Dutch agriculture is a benefit for climate as well as biodiversity."

Experts also argued that the farmers' actions in the Netherlands mimicked previous protests around the world and could foreshadow similar uprisings against government overreach. For example, the so-called "yellow vest" movement in France began as a protest against increased nationwide fuel taxes.

"This is literally communism," Dutch political commentator Eva Vlaardingerbroek told Fox News Digital in an interview. "If the state says, ‘we are going to take your private property away for the sake of a greater good,’ then the state has the prerogative to create crises to strip you of your rights. That's what's happening here."

Vlaardingerbroek said the farmers' reaction to government actions should "absolutely" be a warning for other governments pursuing similar agendas.

"This will definitely affect ordinary civilians," she continued. "It's part of a global agenda, so everyone around the world, especially Western countries, should be aware that this is something that is not just about the Dutch government. This is part of the ‘2030 agenda,’ this is part of the ‘great reset.’"

Wow! Hundreds of Dutch farmers invade s-Hertogenbosch now: "The protests will continue. We have the support of millions of people. There will be actions the Holland has never seen before." pic.twitter.com/6todxlBvge

Similar protests could soon happen in the U.K. and parts of the European Union where natural gas and energy costs are near historic levels, according to Benny Peiser, the director of the London-based Global Warming Policy Foundation. In the U.K., increased prices are expected to send 24% of households, or about 6.5 million households, into fuel poverty.

"The issue is that despite this growing energy crisis in Europe, some governments still prioritize the climate agenda which makes energy ever more expensive, or which forces farmers to close their farms because that is the top priority, still, for a number of governments," Peiser told Fox News Digital in an interview. "This whole green agenda is causing huge burdens."

"The Dutch are driven mad by these policies because it's killing their businesses and the farmers are fighting back big time," he said. "This is what's going to happen all over Europe. I have no doubt that, come winter and millions of families can't heat their homes or pay their bills anymore, that there will be unrest all over Europe." 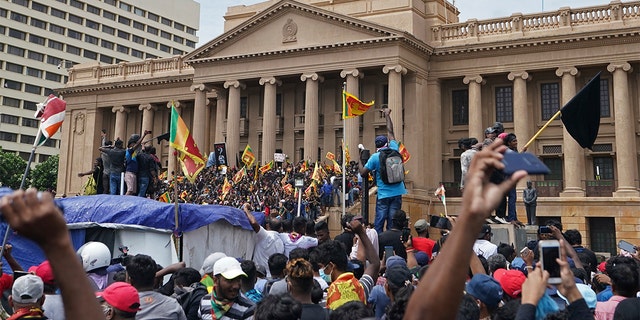 In addition, over the weekend, thousands of citizens in Sri Lanka stormed the private residence of the nation's prime minister, forcing him and the country's president to resign. The protesters were reportedly angry with an ongoing economic downturn and fuel shortage.

Myron Ebell, the director of the Competitive Enterprise Institute's Center for Energy and Environment, noted that the Sri Lankan government also banned chemical fertilizers which environmentalists have blamed for water pollution. Gotabaya Rajapaksa, the country's now-ousted president, remarked that such products have "led to adverse health and environmental impacts" during a speech at a United Nations conference last year.

"Of course, all the crop yields have collapsed, they don't have any tea to sell because the tea harvest is so low," Ebell told Fox News Digital. "So, they have no revenues to buy stuff from overseas and their own food production for people to eat in Sri Lanka is not there. They're starving to death."

"This is all the result of a government decision to limit the access to commercial fertilizer," he added. "There is a connection with the Dutch movement because it is about ‘you got to start using less.’"