Fake Silver Moly-Bars: What To Watch Out For

EDITOR NOTE: When you’re buying physical silver--meaning you’re in a position to actually see and handle the actual metal--even then it’s hard enough to ensure 100% that the quality you paid for is what you received (that is, unless you purchase from a highly-reputable dealer). There are a lot of fakes out there, so you have to trust who you purchased it from unless you’re willing to run chemical tests on your own. But what if you’re a silver ETF investor (say, SLV, the most popular silver ETF in the market), meaning that you have to trust that your custodian has verified the metal that’s supposedly backing your ETF? SLV’s prospectus reads: “The custodian is not responsible for conducting any chemical or other tests designed to verify that such silver meets the purity requirements referred to in the Trust Agreement." Not only are you removed from actually “owning” the metal--as you can’t convert your shares to silver--you can’t even be certain that your custodian is keeping up its end of the bargain by purchasing real silver! Enough said. Unless you purchase non-CUSIP silver from a reputable metals dealer, who knows what you’re actually spending your money on. Why risk it?

A while back Rob Kirby wrote an article revealing that over 1.3 million of the 400 oz gold bars may actually be gold plated tungsten.

This was a shocking revelation that will profoundly effect the gold market and yet it is the most simple of cons. Who ever checks to see if their 400oz gold bars are filled with tungsten??? NOBODY! 400 oz gold bars are handled with kit gloves by those fortunate enough to own them. They represent an astounding amount of value in such a small package. They come in special cases and are wrapped in beautiful cloths. When you buy them you are scared to touch them...who in their right mind would ever drill a hole in them to see if they are real?!

We'd better start thinking a little harder...a little smarter. It is truly amazing that NOBODY ever checks to see if their gold is .999 fine. Buyers almost always trust the markings on the bar even though they have no idea when those markings were placed there or who the refineries that produced them are connected to...

Wanna get rich? If you had no morals you could buy a low quality, unmarked gold or silver bar and "decorate" it with these tools:

This is where a big problem lies in the world of gold and silver. We have "trusted" the big guys for too long and they have abused that trust at every turn.

So let's look at how the gold/tungsten problem is related to silver. Here was my take:

In this article I contended that fake silver could not be as easily substituted as fake gold:

"The silver situation was a little trickier than just creating fake silver bars. The problem was that, unlike gold where it is unheard of to melt down "Good Delivery" bars, large silver bars purchased from the exchanges were routinely removed from inventory and melted down to be used for industrial purposes. If the "Good Delivery" silver bars were filled with something like tungsten or lead the industrial users would know almost immediately. That kind of visibility would have called into question all "Good Delivery" metals on the major exchanges."

What I didn't fully understand at the time was that there is one public silver stockpile that rarely, if ever, removes the physical silver from their "inventory" and that is the iShares Silver ETF (SLV). Of course, I never believed they actually had all that silver they claim to but I wasn't sure how the con worked. Back in the 1980's there were lead filled silver bars floating around but they weren't hard to spot for the dealers. Lead has a density of 11.342 gm/cm3 and silver has a density of 10.501 or an 8% difference. Not that hard to spot for a professional.

But it made me curious as to what other metal might be closer to the density of silver and voila…MOLYBDENUM HAS AN ALMOST IDENTICAL DENSITY TO SILVER!

The density of molybdenum is 10.220 gm/cm3 or only a 2.7% difference and is commonly coated with silver for industrial applications! As a matter of fact there is a long list of companies who make Molybdenum bars as well as specialize in Molybdenum coating.

So could it be that SLV (who boasts JP Morgan as their "Custodian") does not have .999 fine silver bars in their inventory but rather a significant supply of silver plated Molybdenum bars? Let's face it, if the banking cabal figured out that they could gold plate tungsten bars don't you think they also considered silver? Could this be the entire REASON why SLV was approved by "the powers that be" to the surprise of all the silver bugs?

As Paulson, Geithner, Summers, Goolsbee and everyone else who has been involved in the rigging of the markets has stated...

"WE WILL DO WHATEVER IT TAKES TO KEEP THE MONETARY SYSTEM STABLE".

Could "whatever it takes" include flat out fraud? Of course it does!

Let's look for clues that there may be some 1,000 oz "MolyBars" floating around in the SLV inventory.

The fact the SLV has given it's controllers a considerable amount of legal leeway is no secret. The prospectus has more holes than Swiss cheese that's been shot point blank with buckshot. There are more articles covering this subject on the internet than there are bars of real silver in their inventory!

Hidden amongst it's many flaws, the SLV prospectus is carefully written to allow for silver that is not .999 fine. There is no specification as to the amount of silver required to be in their silver! Not .999, not .900, not .500, not Sterling, not plated, not coated...nothing. The original prospectus included the term "SILVER BULLION" when it was describing the silver holdings, but a year later the word "BULLION" was stricken from the prospectus. At the same time JP Morgan changed their liability as custodian from $1B to 265M+ troy ounces. OUNCES OF WHAT? Silver wrapped Hershey's Kisses?

Sure they define an "Ounce" as:

"Ounce" -- A troy ounce, equal to 1.0971428 ounces avoirdupois, with a minimum fineness of 0.999. "Avoirdupois" is the system of weights used in the U.S. and Great Britain for goods other than precious metals, gems and drugs. In that system, a pound has 16 ounces and an ounce has 16 drams."

But they never use the capitalized word "Ounce" in the context of the prospectus as it relates to silver. Any decent lawyer will tell you that it's the oldest trick in the book. Define a term with a capital letter yet never capitalize it in the context of the document. The capitalized term "Ounce" as defined is never used again. So why define it if you don't use it... unless you are trying to deliberately mislead the reader of the prospectus!

The same goes for the word "silver". Not once is "silver" defined or capitalized. They almost screwed up in the first prospectus by using the term "silver bullion" but they fixed that boo-boo. But the most damning evidence that the silver in SLV is not the real deal is in the prospectus and the SLV 10k SEC filing..

"However, the custodian is not responsible for conducting any chemical or other tests designed to verify that such silver meets the purity requirements referred to in the Trust Agreement."

"Silver transferred to the Trust in connection with the creation of Baskets of iShares may not be of the quality required under the Trust Agreement. The Trust will sustain a loss if the Trustee issues iShares in exchange for silver of inferior quality and that loss will adversely affect the value of all existing iShares."

Why in the world would JP Morgan take on a multi-billion dollar liability to act as custodian if they are not going to even check the silver that comes into the warehouse? Because they don't. It's just another Ponzi scheme with the illusion of grand silver deposits that never leave the watchful eye of the custodian or the "Authorized Participants".

The key to faking silver bars is that they can not be sold into the industrial market as the melting point of Moly is much higher and it doesn't have the same electrical conductivity. The SLV inventories represent the perfect resting place for "silver bars" to be stored publicly yet not removed for industrial uses. Clearly it can't be in the COMEX or LME warehouses since both exchanges can be called for delivery.

JP Morgan manages the physical silver which can only be withdrawn by this short list of "Authorized Participants"...who know where their loyalties lie!

Although we really don't know if the "Authorized Participants" have any rights to remove silver since we haven't seen their contracts, we do know that they have NOT removed much silver since its inception...interesting... 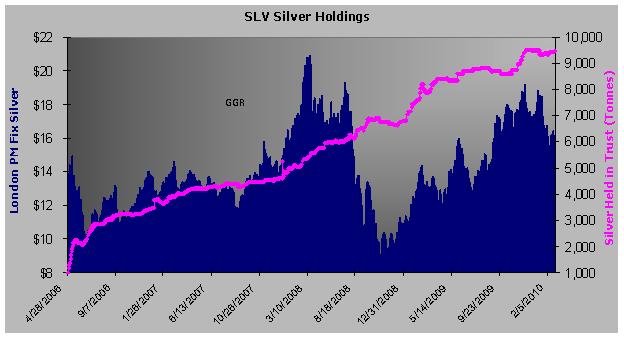 Now that we know that SLV has no legal requirement to hold .999 silver bars lets look for more evidence of "MolyBars". I guess a tell-tale sign would be an increase in Molybdenum production since the announcement and introduction of the Silver ETF in 2005/2006…well what do you know... 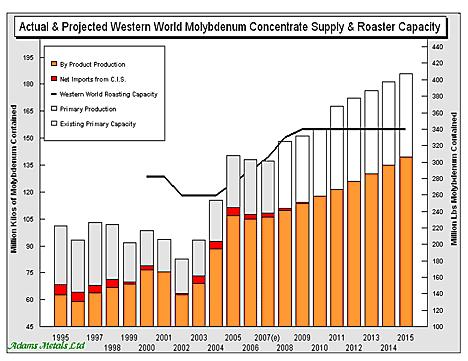 Was it Ronald Reagan that said "Trust but VERIFY"?

I'm not going to get into the fact that the COMEX is now allowing physical delivery in ETF shares because that may be a little too "conspiratorial" for such an upstanding news service as the Road to Roota Letters.

WAIT! Bart Chilton(the New Sheriff in town)and the recently fully funded CFTC staff will surely catch on to any "funny business" going down in ETF gold and silver holdings...oops...

Let's just say I've been down this road before:

Who's the Little Man Behind the Curtain //www.roadtoroota.com/public/133.cfm

Let's face it, the only way to regain trust in the gold and silver markets will be to completely overhaul the entire physical testing and storage system.

Basically, we need a global remelt and re-certification.

As for us little guys...this kinda makes you wish you had paid the premium for those 1oz Gold and Silver Eagles and pre-1965 US coins...surely we can trust the US Government...can't we?

When this is all over those of us sitting with real, verifiable .999 gold and silver will be Kings of the World...

EVERYONE ELSE WILL BE JOKERS.

May the Road you choose be the Right Road

Originally posted on The Road to Roota