EDITOR NOTE: The Federal Reserve is often accused of adhering to a formulaic view of the economy at the expense of the lived economic experiences of the citizens it pledges to serve. And that’s what makes the Fed’s “Beige Book” so important. It’s the only anecdotal source of information they take in from business execs, bank directors, and other so-called market experts before formulating its monetary policy. Last December’s beige book presented a comprehensive picture of business activity, increasing in some places, falling in others. But the one thing almost all districts have in common is a notable rise in “input costs” versus “finished products.” This leads to one of two things: either these costs will reduce businesses’ profit margins, or manufacturers and retailers will choose to raise the price of their products. Might the Fed finally be seeing evidence of the “inflation” they're aiming for? According to Powell’s interview on Thursday, the Fed will have to wait and see whether inflation is a sustainable condition or a mere blip in a deflationary environment. This means that the Fed will need time to average-out the inflation rate, allowing inflation to run beyond the upper threshold until its 2% “average” can be confirmed. We’re in for much higher costs over the next few years. Practical advice: it’s time to hedge your purchasing power. And the best way to do this is to convert some of your cash to non-CUSIP gold and silver.

One month after the November Beige Book toed the "modest recovery" party line with most of the Fed's 12 districts characterizing economic expansion as the trite "modest or moderate", even as four districts described "little or no growth" while five narratives noted that activity remained below pre-pandemic levels for at least some sectors, the economy seems to have picked up (despite pervasive lockdowns) and in today's just released Beige Book which covered the month of December, we find that most Federal Reserve Districts reported that "economic activity increased modestly" since the previous Beige Book period, although conditions remained varied:

Despite the "modest" improvement, reports on consumer spending were mixed with some Districts noting declines in retail sales and demand for leisure and hospitality services, largely owing to the recent surge in COVID-19 cases and stricter containment measures. Not surprisingly, districts reported an intensification of the ongoing shift from in-person shopping to online sales during the holiday season.

In keeping with today's observation that used car prices dipped for the 3rd month, the Beige Book found that "auto sales weakened somewhat since the previous report, while activity in the energy sector was said to have expanded for the first time since the onset of the pandemic."

On the labor front, a majority of Districts reported that employment rose, "although the pace was slow and the recovery remained incomplete." However, confirming the dismal December payrolls, a growing number of Districts reported a drop in employment levels relative to the previous reporting period. Labor demand was strongest in the manufacturing, construction, and transportation sectors, with some employers noting staffing shortages and difficulty attracting qualified workers, especially for entry-level and on-site positions. These hiring difficulties were exacerbated by the recent resurgence in COVID-19 cases and the resulting workplace disruptions in some Districts.

In keeping with the previously reported plunge in waiters and bartenders due to restaurant shutdowns, contacts in the leisure and hospitality sectors reported renewed employment cuts due to stricter containment measures.

On the plus side, firms in most Districts reported that wages increased modestly, as labor market conditions improved somewhat in some areas but generally remained weak. Employers in some Districts reported raising wages or offering more generous benefits, such as year-end bonuses and flexible work arrangements, to limit employee turnover.

Perhaps the most important observation by the Fed report is that almost all Districts saw modest price increases since the last report, with growth in input prices continuing to outpace that of finished goods and services, which of course means smaller profit magins.

Most notably, prices for construction and building materials, steel products, and shipping services were reported to have risen further. There was some good news, with contacts in several Districts noted an improved ability to raise final selling prices to consumers, especially in the retail, wholesale trade, and manufacturing  sectors, and some cited plans to increase selling prices in coming months. This, ladies, is called inflation, and is what the Fed vows it can't find anywhere.

Also, and as we showed earlier, the price surge is just the beginning... 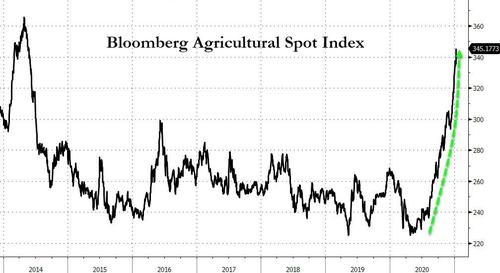 Naturally, energy prices picked up in the reporting period but remained below prepandemic levels.

Finally, home prices continued to surge, driven by low inventories and rising construction costs. Which is ironic because today's CPI report found that shelter costs werte were the lowest since 2011! 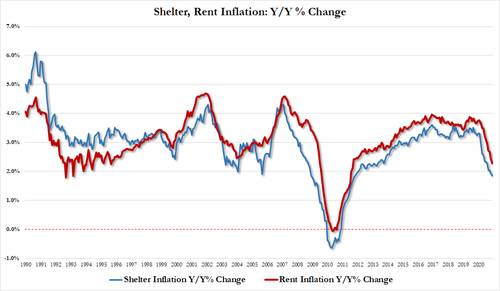 Looking at the word count of the beige book, there was a fractional improvement in the "slowness" category with 28 instances of "slow" in January, down from 30 in December, although concerns about covid jumped again with mentions of covid or coronavirus spiking from 53 to 58 in December, the most since April. 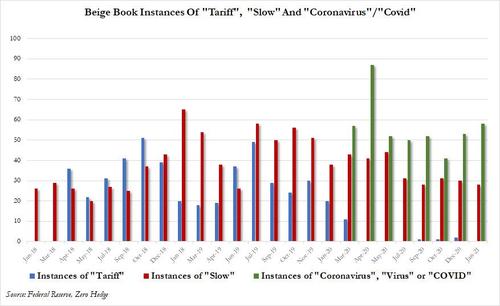 Finally, here are the highlights by District:

Recovery from the pandemic continued in the final weeks of 2020, with mixed results across sectors. In particular, hospitality and travel remained hard-hit. Among firms that were hiring, some cited difficulty finding workers; other firms held headcounts steady or allowed attrition. A substantial dose of pandemic-related uncertainty clouded an otherwise-optimistic outlook.

The regional economy weakened moderately in late 2020, and the labor market has deteriorated somewhat. This weakness was concentrated in the service sector, where activity has been further constrained by a rise in COVID-19 cases, increased restrictions, and cold weather. Consumer spending declined, with holiday sales down from last year and auto sales weakening. Businesses reported some acceleration in wages and selling prices.

Business activity fell modestly during the current Beige Book period as sharply rising COVID-19 cases created disruptions at worksites and curtailed consumer spending during the holidays. On the whole, activity remained below levels attained prior to the onset of COVID-19. Meanwhile, slight wage growth and modest inflation continued, but employment appeared to edge down.

The District economy lost some momentum in recent weeks. Contacts said that rising cases of COVID-19 curbed demand for goods and services and disrupted supply through its impact on labor availability. Despite the slower growth in demand, firms generally indicated that they would hire workers if more were available. Wages and input costs rose moderately, as did selling prices.

Economic conditions have been generally unchanged since our previous report. Reports on overall consumer spending were mixed, while reports on holiday sales focused on an accelerated shift to online shopping. District banking contacts reported slowing growth in loan volumes but anticipate stronger demand in coming months from new PPP loans.

District economic activity increased modestly. Hiring demand increased, but contacts said health risks and other obstacles kept some workers out of the labor force. Holiday spending was better than many feared, but below last year, especially for small retailers. Commercial construction slowed, and the outlook remained weak. Agricultural conditions improved due to increased commodity prices and government aid.

The District economy expanded at a moderate pace, but activity in most industries remained below normal levels. Recovery in the manufacturing and service sector picked up, while retail activity remained weak. The housing market continued to be a bright spot, and real estate lending spurred growth in overall loan volumes. Energy activity accelerated slightly. Employment rose moderately. Outlooks were generally positive, but uncertainty remained elevated.