EDITOR NOTE: The big news from the Fed this week is that it doubled the counterparty limit for reverse repo usage, which went from $80 billion to $160 billion. As an unsurprising result, the Fed's overnight Reverse Repo usage soared. After this move, “the Fed revealed that courtesy of the counterparty ceiling cap doubling, the total usage on the Fed facility soared by $69.2 billion to a new record high of $1.352 trillion, the highest on record.” This reverse repo party is unlikely to end until the Fed finishes tapering sometime in 2022 or beyond, according to ZeroHedge.

Early this morning, one day after the Fed doubled the counterparty limit for reverse repo usage from $80 billion to $160 billion, Wrightson ICAP predicted that usage on the Fed's overnight Reverse Repo facility would surge.

According to the interdealer broker, GSEs have been the only RRP countrparties constrained by the previous $80 billion limit, adding that the the low level of overnight GC repo rates which have frequently dipped below IOER in recent days (orange line below), reflects the fact that “some of the float associated with this month’s UMBS principal and interest payments had to be invested in the repo market 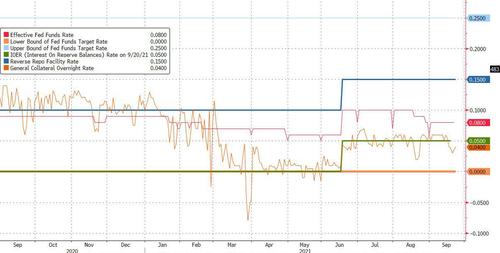 As ICAP economist Lou Crandall wrote, “much, perhaps, all of that cash is likely to be moved to the Fed today,” adding that he was looking for volume to rise to the $1.325 trillion to $1.35 trillion range.

In retrospect, he was on the low side, because at 1:15pm ET the Fed revealed that courtesy of the counterparty ceiling cap doubling, the total usage on the Fed facility soared by $69.2 billion to a new record high of $1.352 trillion, the highest on record. 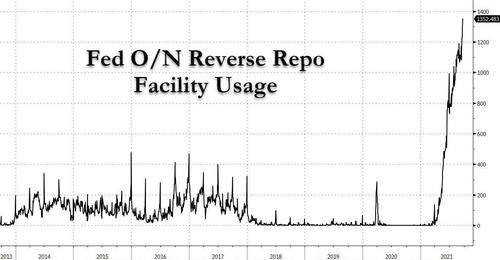 However, while today's spike is unlikely to see a substantial decline especially since the Fed will continue injecting inert liquidity via QE until at least such time as the taper ends some time in 2022 (assuming it ends), Crandall also noted that today's surge will be short-lived as GSE cash will have to be moved to its non-interest-bearing deposits on Friday in order to be available to meet UMBS payment obligations Monday morning.

In terms of future fund flow dynamics, there are several cross-currents: the monthly influx of cash from GSEs adds to the glut related to the Fed’s ongoing asset purchases and Treasury’s drawdown of its cash balance. At the same time, the Treasury continues paying down its bill supply as it attempts to stay under the debt ceiling.

And with the TGA account nearly depleted as a result of the debt ceiling fiasco and likely to be replenished dramatically in Q4 once the debt ceiling drama is over, the reverse repo usage will drop sharply in Q4 as the Treasury floods the market with a record amount of bills as it seeks to replenish its cash supply, as counterparties convert reserves to Bills.