Fed Rate Cuts and Inflation - Will It Pay Off? EDITOR'S NOTE: It was last November when Wall Street was talking about a “Fed pivot,” some analysts and investors hoping for an about-face in monetary policy, from interest rate hikes to rate cuts. If anything, it shows us that neither optimism nor pessimism has a place on Wall Street, as such sentiments can make a fool of even the most calculated of all people. So far, the Fed has telegraphed its position to slow the pace of rate hikes; something it began doing with last December’s 50-basis point rate hike. But is this a sustainable course? Will the Fed have to take a more Volkeresque path, similar to what happened in 1980? Even worse, will the rate hikes only prompt businesses to raise prices to an even greater extent, in which case the Fed’s monetary policy begins working against the central bank? Here’s what analysts are saying.

The Federal Reserve has committed to a historic tightening path at the most rapid pace since the early 1980s. But as the economy comes to a halt and inflation cools, a growing number of economists expect the Fed to be forced to cut rates next year.

The Fed's response to inflation, which at one point was running at more than 40-year highs this year, was to aggressively hike rates, including four consecutive increases of 75 basis points. Overall, rates climbed by 425 basis points in 2022, rising to a range between 4.25%-4.5%.

During the last meeting of the year, the Fed slowed to a 50 basis point increase but remained very firm in its battle to bring inflation down, warning markets that rates are not at a restrictive-enough level and will have to stay higher for longer.

"We've raised 425 basis points this year, and we're into restrictive territory. It's now not so important how fast we go. It's far more important to think about what is the ultimate level. And … how long do we remain restrictive? That will become the most important question," Fed Chair Jerome Powell told reporters after the December FOMC meeting.

On the possibility of a soft landing, Powell also noted that the longer the Fed needs to keep rates higher, the narrower the runway becomes. "I don't think anyone knows whether we're going to have a recession or not. And if we do, whether it's going to be a deep one or not, it's just not knowable," he said.

More rate increases are already priced in by the markets for February and March. Many analysts forecast a pause after that, followed by potential rate cuts towards the year-end.

"The Fed is going to deliver probably at least 50 basis points more of increases next year. I wouldn't be surprised if they have to hike by 75 bps. The impact of this year's hikes will become more clear in January. Macro data shows weakness, but elevated inflation will keep the Fed aggressive as wage pressures are not going away," OANDA senior market analyst Edward Moya told Kitco News.

The market expects the Fed to stick to its hawkish rhetoric next year since backing down too early could mean a risk of entrenched inflation, noted Moya.

Rate cuts in the second half of next year?

Only softer inflation for a sustainable period would allow the Fed to keep slowing the pace of tightening early next year and then pausing or even cutting rates, according to economists.

The November inflation report out of the U.S. has already revealed a deceleration, and there are signs that price pressure will continue to fall sharply in 2023, said Capital Economics chief North America economist Paul Ashworth. In November, the CPI climbed 7.1% — the smallest advance since December 2021 — following a 7.7% rise in October.

Capital Economics sees the Fed cutting rates in the second half of next year. "Although the economy appears to have held up in the fourth quarter ... a recession is on the way, which will help to reduce inflationary pressures further. The upshot is that, despite the Fed's continued hawkishness, we still expect interest rates to be falling again by late 2023," Ashworth added.

DoubleLine Capital CEO Jeffrey Gundlach said he sees the Fed moving another 50 basis points in February, with rates potentially peaking at 5% next year.

But once the Fed reaches 5%, it won't be able to keep rates at that level for more than one meeting, Gundlach warned, and it will be forced to cut.

"You get to 5%, you repeat it, and then the market thinks it will start falling," he said. "The bond market is pricing in that the fed funds rate one year [later] will be the same as the fed funds rate at the December meeting. This leads me to wonder why even bother with these hikes? Dig a hole just to fill it back in."

Gundlach also pointed out that the Fed might not even make it to 5% as the data is "weakening too rapidly."

Another likely scenario is a pause in the second quarter and cuts in the third quarter of next year, according to ING. The Dutch bank projects a more painful economic downturn than is currently being priced in.

"The Fed has, on average, only waited six months between the last rate hike in a cycle and the first rate cut," ING's economists said in their outlook. "Recessionary forces will dampen price pressures … the Fed has a dual mandate which includes an employment dynamic on top of price stability. This offers the Fed even greater flexibility … to respond with stimulus, and we believe it will from the third quarter of 2023 onwards."

Risk of a more hawkish Fed

In a much more hawkish forecast, ABN AMRO is looking for additional rate increases of 125 basis points next year. "We think we are still some months away from a point where the Fed would be comfortable with a major easing in financial conditions – likely not until late Q2 or Q3," said ABN AMRO's senior U.S. economist Bill Diviney.

The bank's outlook stems from the projection that inflation won't fall significantly enough until the second half of next year.

There is still a chance that the fed funds rate could peak higher than many are anticipating, warned economists at Wells Fargo.

"Our forecast looks for one more 50 bps rate hike on February 1, followed by a final move of 25 bps in mid-March. There is still plenty of uncertainty in the outlook," the bank's 2023 outlook said. "An outright pivot to monetary policy easing remains farther off and will depend on how quickly inflation moves back toward 2% and how much economic pain is induced during the process." 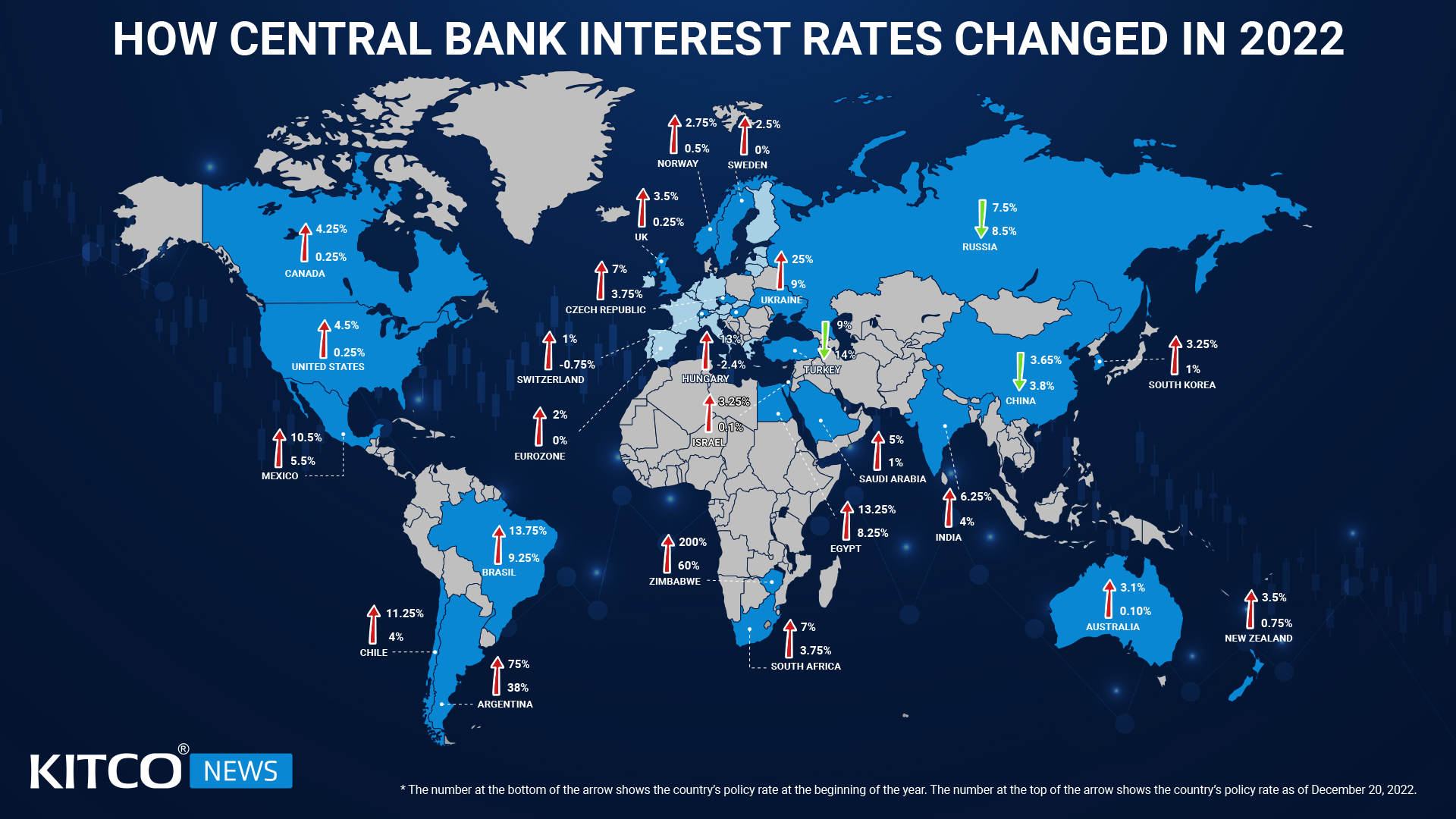 Even though the Fed was ahead of many other central banks around the world, which pushed the U.S. dollar index to 20-year highs earlier this year, the overall trend has been to hike rates at a historically aggressive pace.

"Over 90% of central banks have hiked interest rates this year, making the (mostly) global coordinated effort unprecedented. The good news? We think we're close to the end of these rate hiking cycles, which could lessen the headwind we've seen on global financial markets this year," said LPL Financial chief economist Jeffrey Roach and strategist Lawrence Gillum.

This year saw some of the most aggressive moves in monetary policy history, with Canada raising rates by 400 basis points and the ECB hiking 200 bps.

The most aggressive central banks in the world were Zimbabwe, raising rates by 14,000 bps, and Argentina, hiking 3,700 bps. Both countries employed this tactic to fight surging inflation and rapid currency devaluation.

On the other hand, countries like China, Russia, and Turkey cut rates to remain accommodative and support their economies.

And there was Japan, which maintained its negative rate of -0.1% throughout this year. The only development from Japan was the modification of its yield curve control band. In December, the central bank said it would expand the fluctuation range of the 10-year Japanese government bond yield from plus and minus 0.25 percentage points to plus and minus 0.5 percentage points.