EDITOR'S NOTE: Another day, another big wig at the U.S. central bank is out. Zero Hedge reports that longtime Federal Reserve Governor Randal Quarles will step down from his position at the end of December. The interesting piece of Quarles departure is, “as Bloomberg reports, his resignation answers a thorny question for the White House, too, which was forced to wonder how long the appointee of former President Donald Trump would stay on the board and slow down the leadership overhaul the administration is planning for the Fed.” Many see this as one of the last housecleaning pieces before Lael Brainard — the only Democratic appointee on the Fed’s Board of Governors — takes over as chair from Jerome Powell. News of Brainard taking over could come soon and likely begin in early 2022.

...and another one bites the dust.

Federal Reserve Governor Randal Quarles will step down from the central bank in the last week of December.

In October, the Fed announced that Fed Vice Chairman for Supervision Randal Quarles will be removed from his role as the main watchdog of Wall Street banks after his four-year-term officially expired. The Fed made the announcement in a statement that sought to answer key questions for banks and Democrats about how the Trump appointee’s era of oversight will end.

As Bloomberg reports, his resignation answers a thorny question for the White House, too, which was forced to wonder how long the appointee of former President Donald Trump would stay on the board and slow down the leadership overhaul the administration is planning for the Fed. Technically, Quarles could have stayed in his governor term and many of his Republican friends had asked him to hold on into 2022. 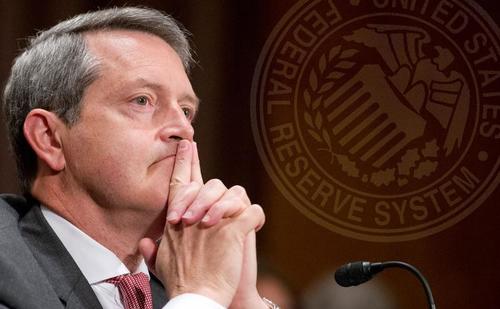 One can't help but get the feeling this is a cleaning of the house before Brainard takes over from Powell as Quarles has been criticized by Senator Elizabeth Warren for sanding down bank regulations during his tenure, and she has also said she would not support a second term for Powell.

Brainard is the only sitting governor on the Board appointed by a Democrat who is seen as a contender for all three leadership positions.

This now leaves President Biden to fill four jobs at The Fed.

Full Statement from The Fed:

Randal K. Quarles submitted his resignation Monday as a member of the Federal Reserve Board, effective at the end of December. He served as the Board's first Vice Chair for Supervision and has been a member of the Board since October 13, 2017.

As Vice Chair for Supervision, he oversaw the supervision and regulation of financial firms in the Board's jurisdiction. He served simultaneously as Chair of the Financial Stability Board, or FSB, an international body established by the G20 to ensure the resilience of the global financial system. His three-year term as FSB Chair ends on December 2.

In both positions, he played a central role in ensuring the safe operation of both the domestic and international financial systems during the stress of the COVID event.

Prior to his appointment to the Board, Quarles was founder and managing director of the Cynosure Group, a private investment firm. He also served in a variety of senior positions at the Treasury Department under both Bush administrations, including Under Secretary for Domestic Finance, was the U.S. Executive Director of the International Monetary Fund, and was a partner at both the Carlyle Group, and earlier, Davis Polk & Wardwell. He is married with three children and is from Utah.

Quarles resignation is below: 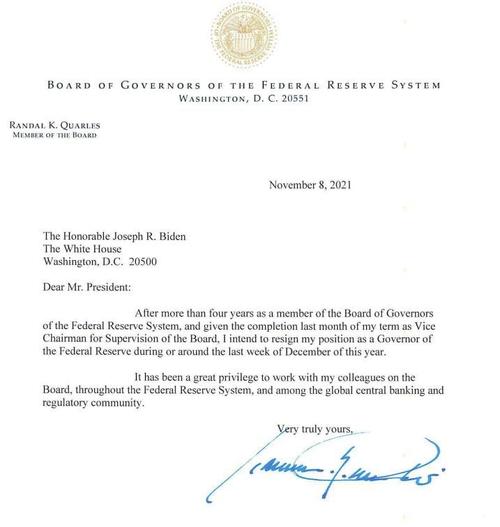