EDITOR NOTE: You’ll be forgiven if you skip this commentary to view the image below: it’s the largest budget deficit on record--a whopping $3.1 Trillion. Words can’t do it justice, you have to see the chart. Here’s a sarcastic question: is there even a point to taxation when the government can just go from behind and ask the Fed for more “helicopter money”? Apparently, our “leaders” want to have their cake and eat it too. But take a look at each segment contributing to the deficit, particularly US debt. You’ll see why a debt projection of $30 Trillion by the end of next year isn’t so far off at all. Note that the lifeline saving America from bankruptcy isn’t its productivity but rather its printing machines.

One month after the Treasury announced that the US ended fiscal 2020 with a staggering, record $3.1 trillion budget deficit, more than triple the prior year's $954 billion, as a result outlays of $6.552 trillion, almost double the receipts of $3.420 trillion, moments ago we learned that the US started off fiscal 2021 in style, and in the month of October the budget deficit was a whopping $284 billion, $10 billion more than the expected $274.5 billion, and more than double last year's October deficit of $134.5 billion. This was also the biggest October deficit in history.

Specifically according to the Treasury, in August, government outlays were $521.8 billion, up $24 billion from the $497.8 billion spent in September, and a whopping 37% more than the $380 billion the US spent last October... 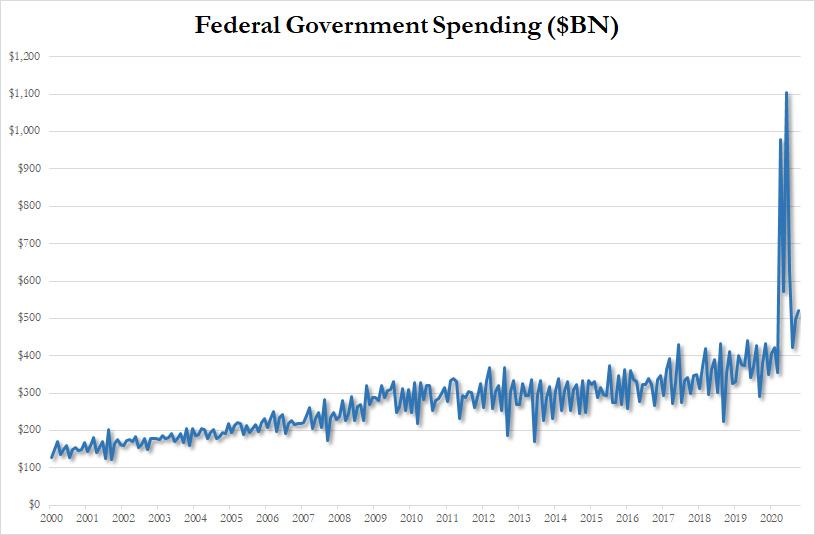 ... while receipts shrank from the $373.2 billion received in September to $237.7 billion, and down 3.2% from the $245.5 billion received last October (the question of why anyone still pays taxes in a time of helicopter money, when the Fed simply purchases whatever debt the Treasury issues, remains). 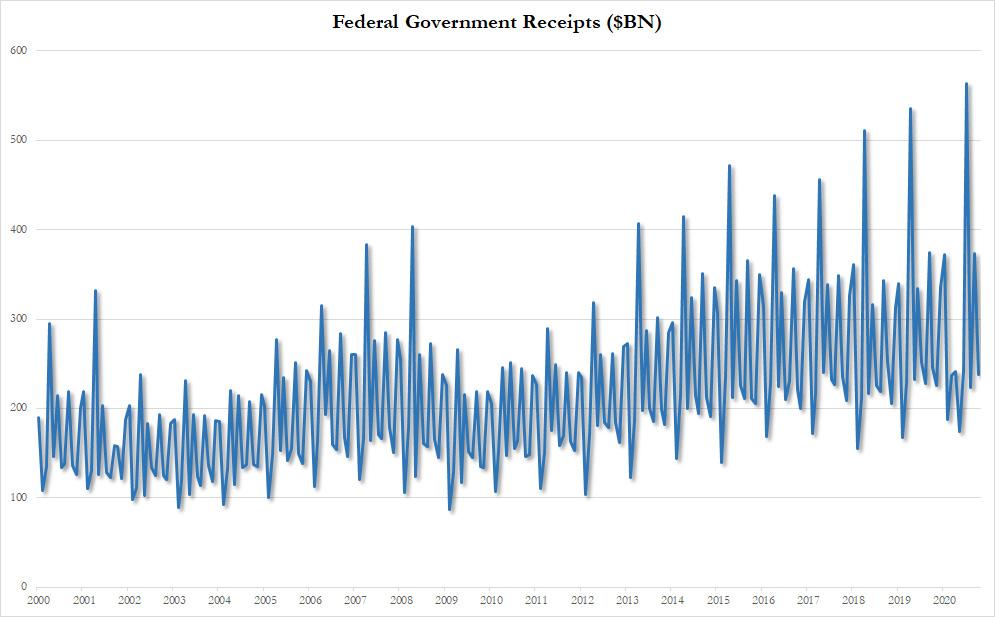 The chart below shows the October and YTD 2020 breakdown between various receipts and outlays. It reveals that the bulk of the total $238BN in receipts came from Individual Income Taxes ($109BN) and from Social Security and Retirement payments ($96BN), while the biggest spending categories were Medicare ($96BN), Social Security ($93BN), National Defense ($80BN), Income Security ($73BN) and Health ($63BN). Net interest on public debt was "only" $32 billion, but this number can only grow. 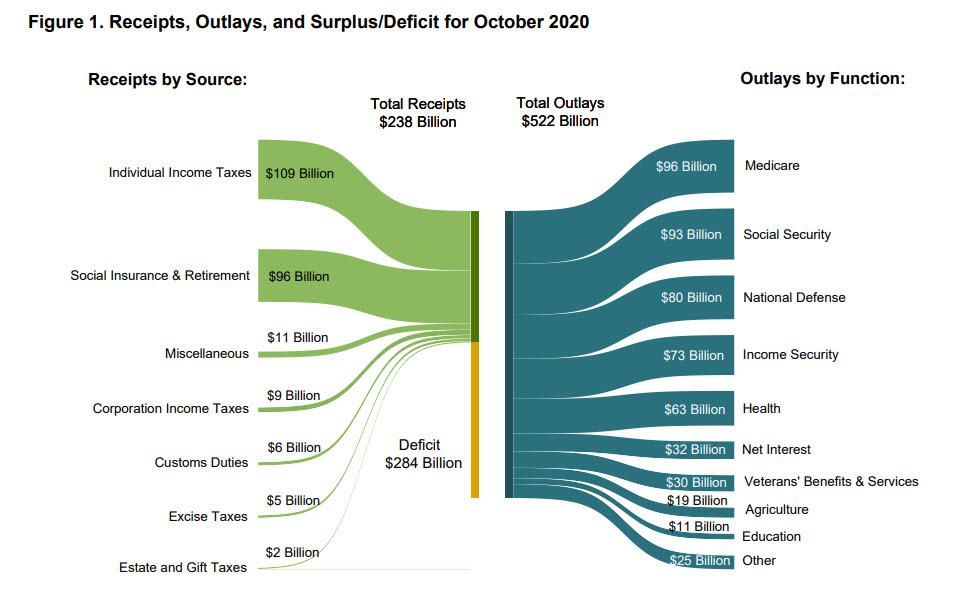 Finally putting the October number in context, the October deficit of $284.1 billion was not only more than double the deficit recorded in any year in the past decade, but was the highest October deficit on record, in what is an ominous confirmation that the US debt, already over $27.1 trillion will rise above $30 trillion within the next 12 or so months. 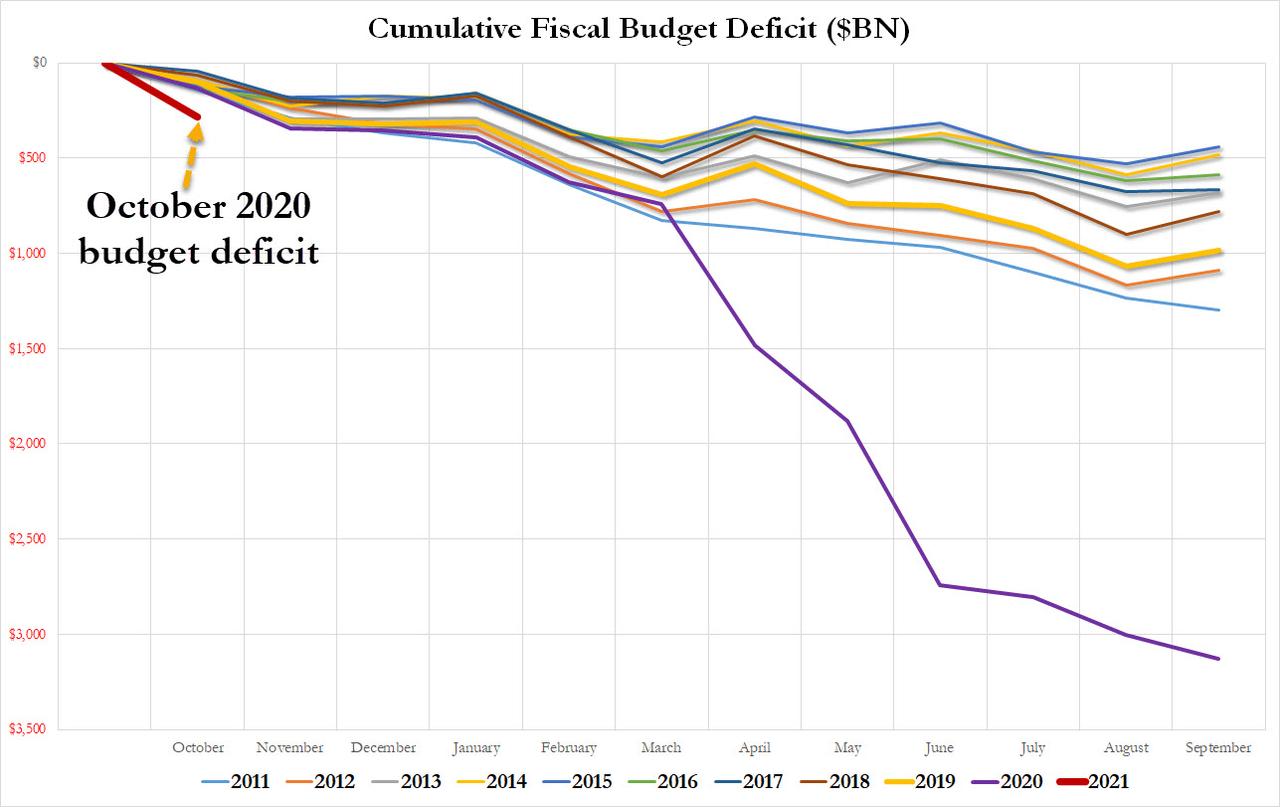