FOMC Minutes: Highlights And Assumptions Of More Fiscal Aid In 2020

EDITOR NOTE: The Fed has set forth its policy moving forward with QE as a main driver. Although the economy isn’t an automated machine, whose parts and movements can move in a predictable and controllable manner, the Fed nevertheless bases its policy on this assumption. Everything appeared to be working well, up until something unexpected happened: they were expecting a stimulus deal (fiscal aid) to be passed in 2020. Oops. With that component now gone, it may end up the monkey wrench that throws everything out of whack. Time to recalibrate? How bad might the negative impact be, considering that even the slightest change to monetary policy can have widespread consequences for the economy?

Since the last FOMC meeting on Sept 16th, gold has been the biggest loser while the USD managed modest gains... 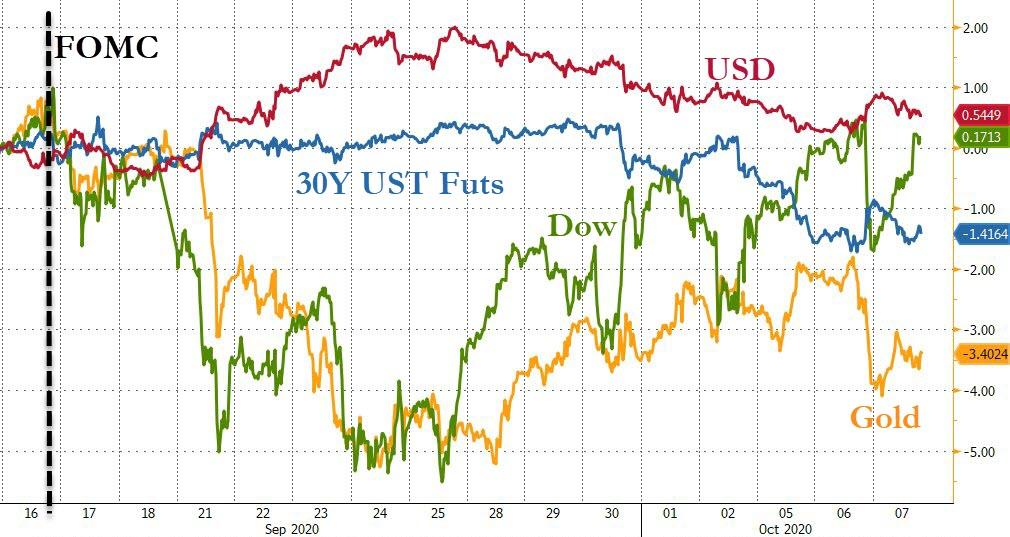 Of course, the very modest gain in stocks was thanks to a huge short-squeeze... 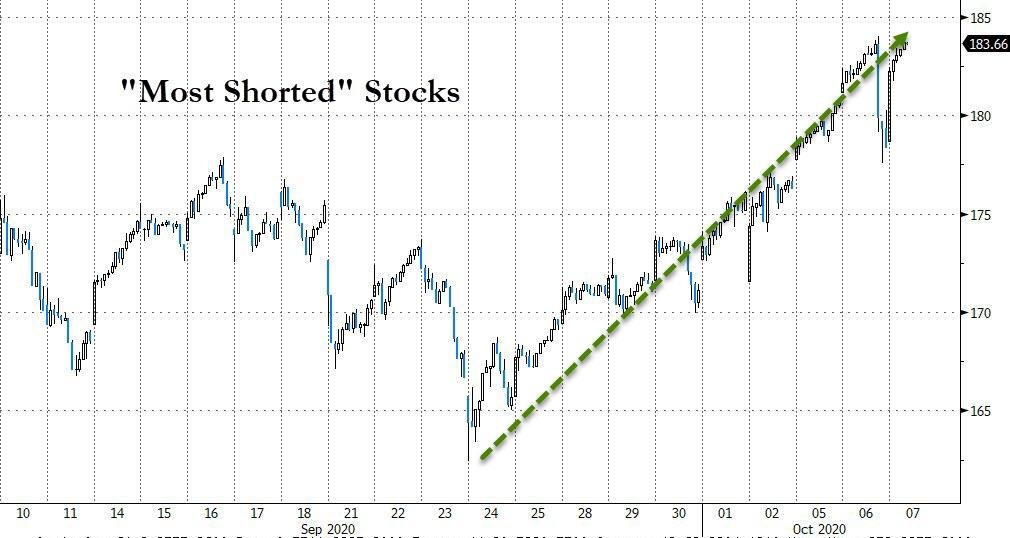 Interestingly, despite The Fed promising that rates are on hold for pretty much ever, the market's expectations for Dec 2021 have shifted hawkishly higher... 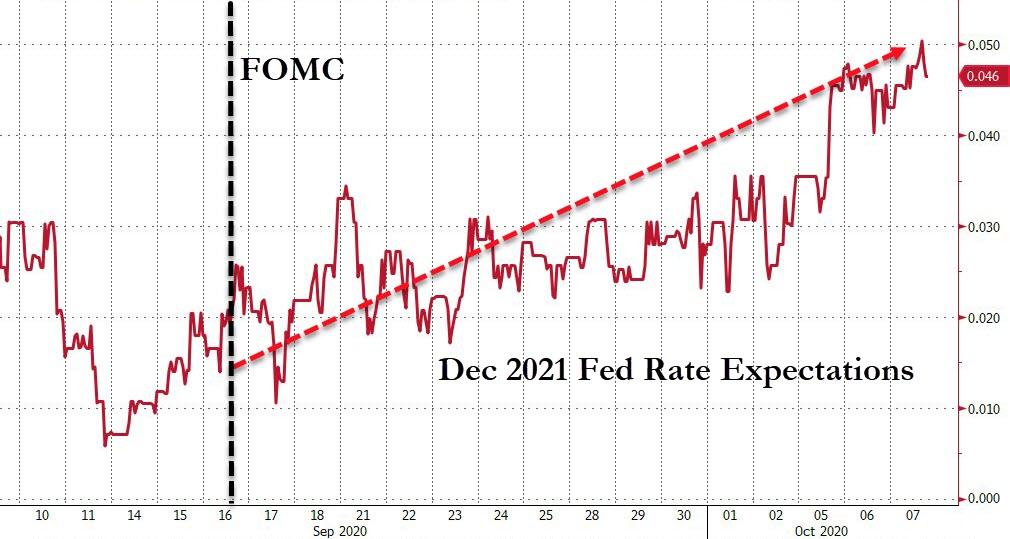 And real yields have risen significantly... 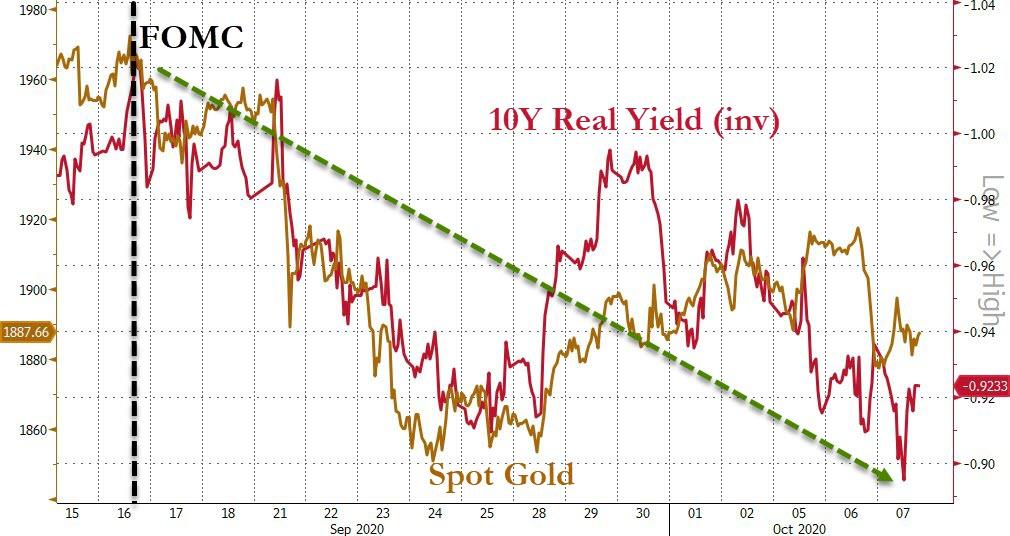 As we noted earlier, while the Minutes will likely reinforce the recent run of Fed commentary (more fiscal stimulus needed, uncertainties ahead, rates not going anywhere any time soon, etc) the market will be paying particular attention to any remarks on the Fed's QE purchases, especially since the chances of fiscal help (and thus Treasury supply that would need to be monetized by The Fed) has all but evaporated.

Also, as a reminder, the meeting was unusually contentious with two dissents (one dovish - Kashkari, one hawkish - Kaplan).

One critical item in these minutes will be to see how reliant the Fed's forecasts were on fiscal stimulus given the news in the last 24 hours on that front.

Reaffirming the lower-forever rates forecast, minutes show Fed officials laid out a three-part test that must be met before they consider lifting short-term rates from near zero.

So essentially the “no change until at least 2023” takeaway that most had from the Fed decision last month isn’t set in stone.

"Participants generally noted that outcome-based forward guidance for the federal funds rate of this type was not an unconditional commitment to a particular path. Indeed, outcome-based guidance of this type would allow the public to infer changes in the Committee’s assessment of how long the target range for the federal funds rate would remain at its current setting."

Additionally, and most notably, given ZIRP forever, some participants also noted that in future meetings it would be appropriate to further assess and communicate how the Committee’s asset purchase program could best support  the achievement of the Committee’s maximum employment and price-stability goals.

Regarding asset purchases, participants judged that it would be appropriate over coming months for the Federal Reserve to increase its holdings of Treasury securities and agency MBS at least at the current pace. These actions would continue to help sustain smooth market functioning and would continue to help foster accommodative financial conditions, thereby supporting the flow of credit to  households and businesses.

Most ominously, Fed staff and many officials forecasts did indeed assume some more fiscal aid in 2020.

The staff’s forecast assumed the enactment of some additional fiscal policy support this year; without that additional policy action, the pace of the economic recovery would likely be slower.

"a couple of participants indicated that highly accommodative financial market conditions could lead to excessive risk-taking and to a buildup of financial imbalances."

With regard to COVID:

"In the staff’s medium-term projection, the baseline assumptions included that the current restrictions on social interactions and business operations, along with voluntary social distancing by individuals and firms, would ease gradually through next year."

"While the outlook for inflation was viewed as highly uncertain, a number of participants projected that inflation would run below the Committee’s 2 percent longer-run objective for a significant period before moving moderately above 2 percent for some time—consistent with the Committee’s revised consensus statement.

Participants still generally judged that the overall effect of the pandemic on prices was disinflationary."

"The gains in employment over July and August were generally seen as larger than anticipated. Participants judged, however, that the labor market was a long way from being fully recovered.

They generally agreed that prospects for a further substantial improvement in the labor market would depend on a broad and sustained reopening of businesses, which in turn would depend importantly on how safe individuals felt to reengage in a wide range of activities.

Some participants noted that the majority of gains in employment so far reflected workers on temporary layoffs returning to work. These participants judged it as less likely for future job gains to continue at their recent pace, because a greater share of the remaining layoffs might become permanent.

Workers facing permanent layoffs were seen as more likely to need to find new jobs in different industries, and this process could take time, especially to the extent that these workers needed to be retrained."

The Fed has suddenly become more 'woke' than normal, worrying about the effect of the pandemic lockdowns on minority workers:

"Participants observed that lower-paid workers had been disproportionally affected by the economic effects of the pandemic. Many of these workers were employed in the service sector or other industries most adversely affected by social-distancing measures.

With a disproportionate share of service-sector jobs held by African Americans, Hispanics, and women, these groups were seen as being especially hard hit by the economic hardships caused by the pandemic.

Participants viewed fiscal support from the CARES Act as having been very important in bolstering the financial situations of millions of families, and a number of participants judged that the absence of further fiscal support would exacerbate economic hardships in minority and lower-income communities.

In addition, several participants observed that the effects of the pandemic were disrupting the supply of labor because of the need to care for children, many of whom were attending school virtually from home."

And finally, The Fed discovers the perils of 'reflexivity':