EDITOR NOTE: The Fed announced two rate hikes in 2023, a statement demonstrating a more hawkish outlook as the central bank has achieved, perhaps faster than expected, the inflation it had sought. The market is pricing in that forecast, with the dollar index and 10-year treasuries rising, and gold pulling back. So, is that it? Not quite. The economy is not a machine. There’s still plenty of economic data ahead of the forecasted hikes. In other words, we’re not quite out of the woods yet, as many unexpected turns and shocks--all of which can spook the markets--are still ahead of us. Despite the Fed’s adjustments, which aim to be accommodative, there are still too many unknowns that have yet to reveal themselves in the coming weeks and months. And given the volume and relative frequency of these reports, it makes us realize that 2023 is still a long way away. What will the markets be looking at? More importantly, looking toward the future from an investor's perspective, which ones should you be paying close attention to?

Since the April 28th FOMC meeting, gold is the strong outperformer while the dollar is unchanged. Bonds and stocks are up about the same (1.5-2%)... 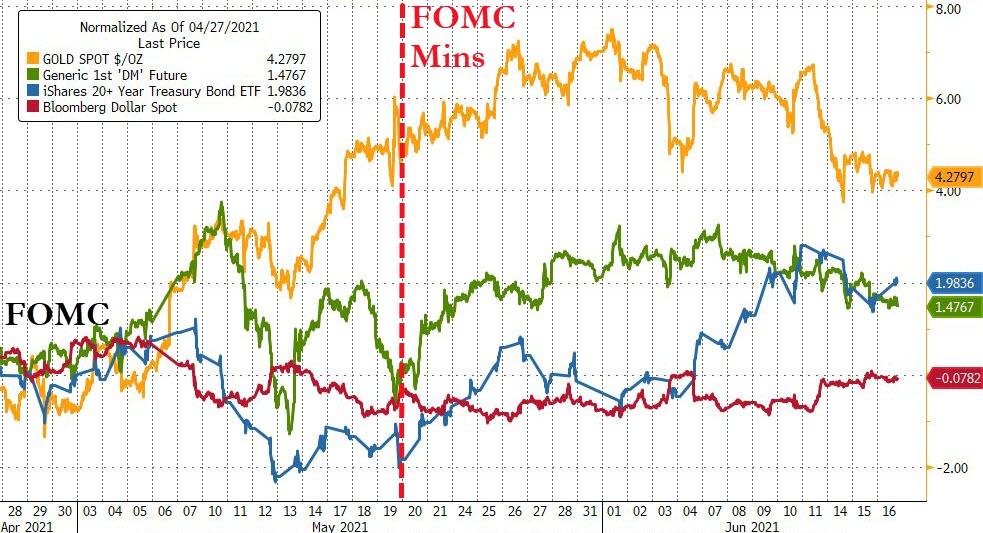 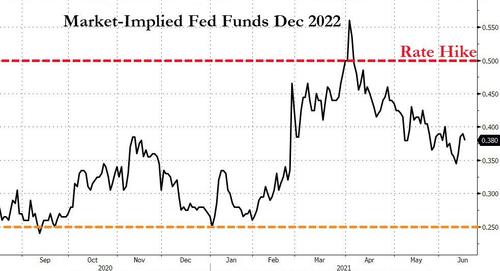 Finally, we note that the longer-term expectations of the market are significantly divergent (and more hawkish) from The Fed's... 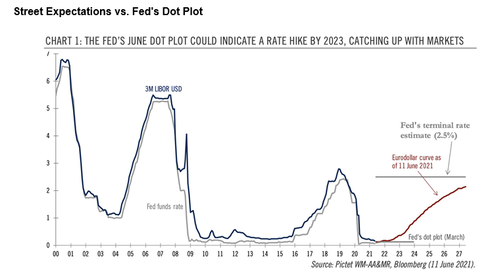 So what will The Fed do?

The big question is the 2023 Fed Funds dot plot (and whether it will be adjusted enough to shift the median expectation to a rate-hike).

The other thing to focus on - frankly ignoring the words of the statement - is whether the 2023 PCE projection is increased from March's 2.1% forecast, which could spook the market's faith in The Fed's view that the inflation spike is transitory.

And what will Powell say about the stagflationary onset that is cornering him? 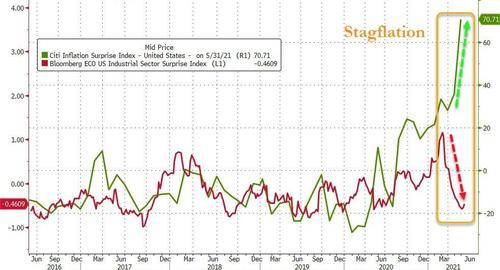 We do note that stocks were at the lows of the day ahead of the statement... 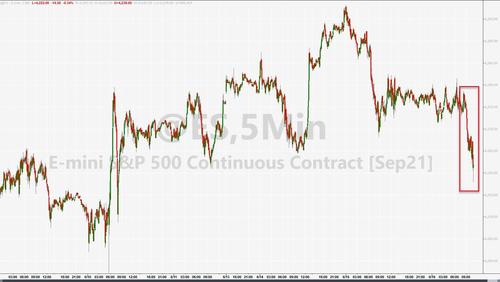 And here's what happened:

The Fed keeps benchmark rates and the pace of bond-buying unchanged but the biggest shift is a hawkish tilt to its rate forecasts as Fed median projections show 2 rate-hikes by end-2023 and 7 FOMC members see a hike in 2022...

Another way of seeing the critical difference in the dot plot between March and today: from 0 median rate hike in 2023 to two! Guess that inflation was transitory after all...

For those confused by the rorshach above, the 2023 median dot was a lot higher; in fact, only five members had rates unchanged up from 11 in march, and the median is now 0.625%, higher than anyone was reasonably expecting! That said, the sheer dispersion of dots in 2023 suggest that this is a Fed that doesn't really know what the outlook looks like. In other words, the "median of 2 hikes" in '23 a byproduct of a lot of different views (on hawkish/dovish side). This is not a clear message to markets, and can easily change as soon as there is a deflationary whiff in the economy.

The fact that the Fed now sees 2 hikes in 2023 suggests FOMC has shifted quite a bit more hawkish. This, as FX strategist Viraj Patel notes, will be seen as dollar positive & sets up Aug Jackson Hole taper announcement. That said, a lot rides on US data (esp next few jobs print), which is why Powell may talk down the hawkish reaction during the Q&A.

Next, looking at the Fed's forecast, there was no unnecessarily dovish indication of a higher unemployment in 2023, which was left unchanged in the latest projection. What did change was a slight increase in 2023 GDP, from 2.2% in march to 2.4% in June, while PCE inflation also rose from 2.1% to 2.2%, giving the Fed some leeway to forecast 2 rate hikes in 2023.

Elsewhere, the reverse repo fiasco has finally been addressed by the Fed: given the massive excess in usage in the Fed's RRP facility - which today saw well over $500BN in usage again - the Fed hiked IOER by 5 bps to 0.15% from 0.10%, as about half the banks had expected it would do. And to keep the corridor parralel, it also raised the Reverse Repo rate by 5bps from 0% to 0.0%.

Looking at the Fed's full statement reveals very few changes from March, although Bloomberg does note a slight change in the language on the pandemic and economic risks -- a slightly more positive tone.

“Progress on vaccinations will likely continue to reduce the effects of the public health crisis on the economy, but risks to the economic outlook remain.”

“The ongoing public health crisis continues to weigh on the economy, and risks to the economic outlook remain.”

Here is the full statement redlined: 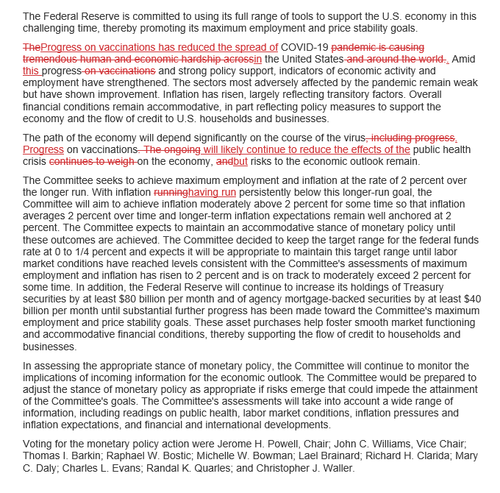 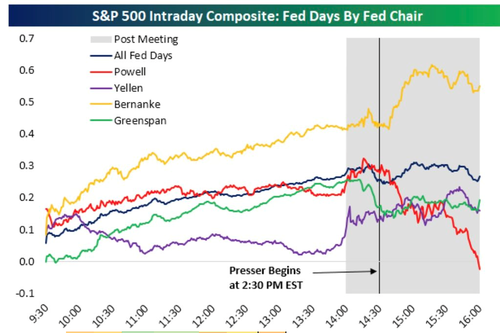 We Have The First Trillion Dollar Reverse Repo