Gold Analysis And Technical Outlook For The Week

EDITOR'S NOTE: The trading volume may still be relatively light, but gold is now testing the upside of near-term resistance. If it closes above $1,968 an ounce, and if it does so on high volume, then we might see it work its way up toward its $2,089 record high. That’s the current gold technical outlook. Still, there are many fundamental hurdles at play. Today, the CPI report slightly topped analyst expectations. Much of gold’s momentum will be in response not only to this data but to expectations of the Fed’s next policy moves. We also have to factor in the fragile situation in Ukraine. The FXStreet article provides something of a 360-degree view of the fundamental and technical backdrop for gold in the coming week. If you’re looking to rebalance or load or lighten up on your exposure, you might want to check out their analysis to inform your assessment.

Gold struggled to make a decisive move in either direction for the majority of the week. Despite the broad-based dollar strength and the sharp upsurge witnessed in US Treasury bond yields, the yellow metal managed to hold its ground on safe-haven flows and ended up closing in the upper half of its weekly range above $1,940.

In the absence of high-tier macroeconomic data releases, gold registered small daily gains on Monday. On Tuesday, XAU/USD edged lower amid a 6% increase witnessed in the 10-year US Treasury bond yield, after Fed Vice Chairwoman Lael Brainard said the Fed was prepared to take "stronger action" if inflation developments were to require it. Additionally, the data from the US revealed that the business activity in the services sector continued to expand at an impressive pace in March regardless of rising input prices. Nevertheless, the negative shift witnessed in risk sentiment helped gold limit its losses.

European Commission President Ursula von der Leyen announced a ban on Russian coal imports, roughly worth around €4 billion a year, on Tuesday. Additionally, the US and the UK decided to disallow new investments in Russia and block all transactions with several major Russian banks.

On Wednesday, the hawkish tone seen in the minutes of the FOMC’s March policy meeting fueled another rally in US yields and dragged gold below $1,920. Once again, XAU/USD capitalized on risk aversion and staged a rebound before ending the day in positive territory.

According to the Fed’s publication, many participants noted that they would have preferred a 50 basis point increase in the target range for the federal funds rate at the March meeting. Moreover, policymakers saw it appropriate to start reducing the balance sheet after the May meeting. With the initial market reaction, the benchmark 10-year US Treasury bond yield climbed to its highest level in more than three years near 2.7%.

In the second half of the week, the dollar preserved its strength on Fedspeak but the precious metal stayed resilient. St Louis Fed President James Bullard argued on Thursday that the policy rate would need to go as high as 3.5% to fight inflation. Furthermore, Chicago Fed President Charles Evans and Atlanta Fed President Raphael Bostic said that the policy needed to get to a neutral setting toward the end of the year.

On Friday, the 10-year US T-bond yield extended its rally and the US Dollar Index advanced beyond 100.00 for the first time in nearly two years. Gold, however, stretched higher ahead of the weekend and registered weekly gains. It's worth noting that XAU/EUR rose nearly 3% this week, suggesting that gold was able to grab some of the capital flowing out of the euro as well.

On Tuesday, the US Bureau of Labor Statistics will release the Consumer Price Index (CPI) data. On a yearly basis, CPI is expected to advance to a fresh multi-decade high of 8.3% in March from 7.9% in February.

As it currently stands, the CME Group FedWatch Tool shows that markets are pricing in a 56% probability of a total of 100 basis points (bps) rate hike in the next two meetings. A stronger-than-expected CPI print could ramp up the odds for two successive 50 bps Fed rate hikes and lift US T-bond yields even higher. This week’s movements, however, pointed to a weakening in the inverse correlation between gold and US 10-year T-bond yields. Hence, an improvement in market mood might be required for sellers to start dominating gold’s price action.

The European Central Bank (ECB) will announce monetary policy decisions on Thursday. The bank is widely expected to keep its settings unchanged but a hawkish tilt in forward guidance could open the door to a decisive recovery in EUR/USD and weigh on the dollar. In that case, XAU/USD should be able to edge higher. On the other hand, the bank might turn cautious and focus on the potential negative impact of a protracted Russia-Ukraine conflict on economic activity rather than inflation. In such a scenario, EUR/USD could come under bearish pressure making it difficult for gold to gain traction.

The US economic docket will feature March Retail Sales data on Thursday and markets are expected to turn quiet amid the Easter holiday on Friday. 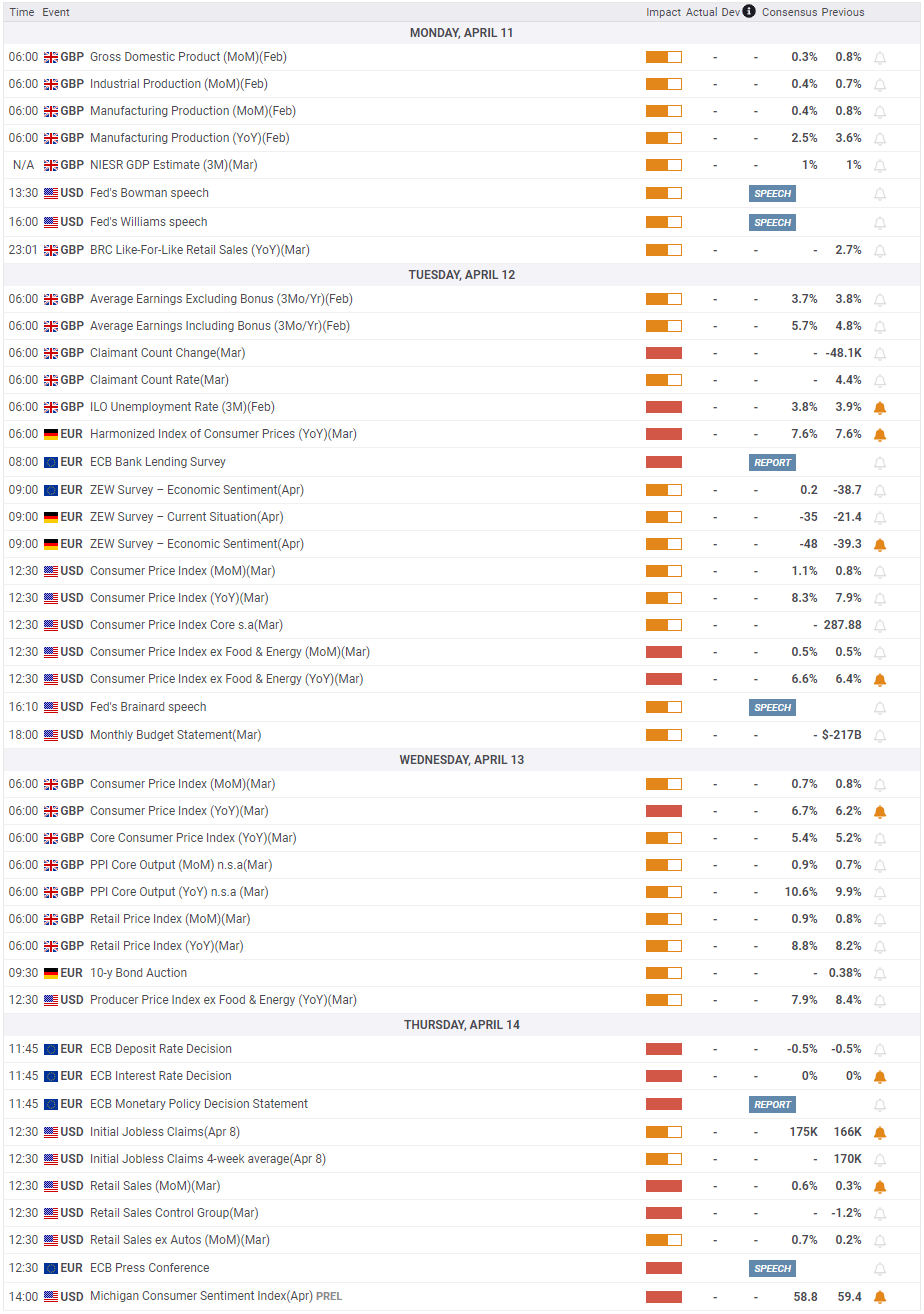 Gold made a daily close above the 20-day SMA for the first time in two weeks on Friday. Additionally, the Relative Strength Index (RSI) indicator rose slightly above 50, pointing to a bullish tilt in the technical picture.

On the upside, $1,950 (Fibonacci 38.2% retracement of the latest uptrend) aligns as first technical resistance. In case gold rises above that level and starts using it as support, it could target $1,970 (static level) and $1,990 (Fibonacci 23.6% retracement).

On the other hand, strong support seems to have formed at $1920 (Fibonacci 50% retracement). With a daily close below that level, sellers could take action and drag gold toward $1,910 (50-day SMA) and $1,900 (psychological level).

The FXStreet Forecast Poll shows that the majority of polled experts remain bullish in the near term. The one-week average target, however, sits at $1,941. The one-month and the one-quarter outlooks suggest that gold is expected to continue to edge higher toward $2,000. 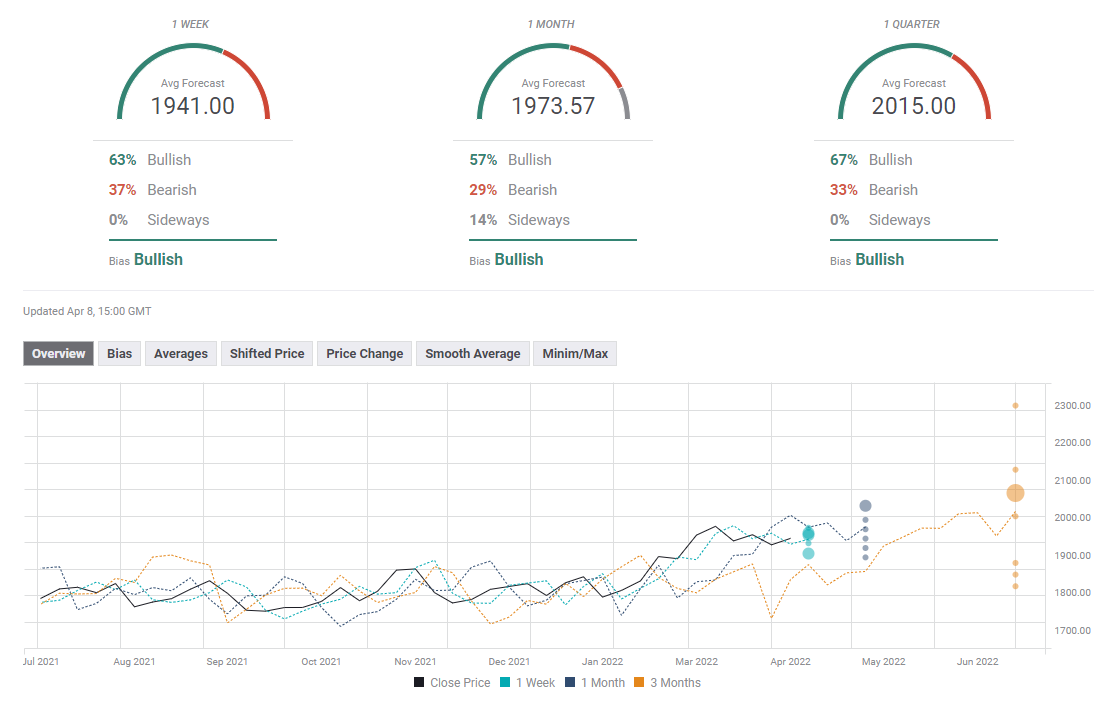 Gold Futures Rose This Week As The U.S. Dollar Weakened

More Experts Claim The U.S. Could Be Headed For Recession In The Next Year