Gold And Silver’s Consolidation May Not Be Over Yet

EDITOR NOTE: The folk wisdom that applies to the forecast presented in the article below is that “good things come to those who wait.” We’d like to add, however, that you’d have to have a pretty good reason to wait, lest you get stranded, foolishly waiting for something that’s clearly not going to show up. But in the case of gold and silver, inflation and the public perception of inflation, slow at first, are picking up speed. Nevertheless, Basel III, which may put the LBMA and other paper obfuscators out of existence, drawing a line between paper and physical precious metals, marks a certain fate, and it’s on schedule to arrive. Holding “physical” monetary metals is the only way to truly “own” them. Loading up on physical gold and silver now, as both are still sitting within their pullback ranges, is the most opportune time to benefit from the metals’ price rise months before it becomes a Tier-1 currency, like legal tender on a sovereign monetary level.

In last week’s report it was suggested that a test of recent support levels of $1800 for gold and $27 for silver could not be ruled out. A small pull-back did materialise, with gold falling $22 at one point, before rallying to a net $4 up on the week at $1833 in the European time zone this morning. Silver fell a net 27 cents to $27.14.

“Pause mode” was not restricted to precious metals, with most of the commodity complex easing off as well. Crude oil was 2% down on the week, copper 2.4% and lumber which has been the most spectacular of the raw materials slipped 13%. The dollar’s trade weighted rallied after its recent falls, which is our next chart. 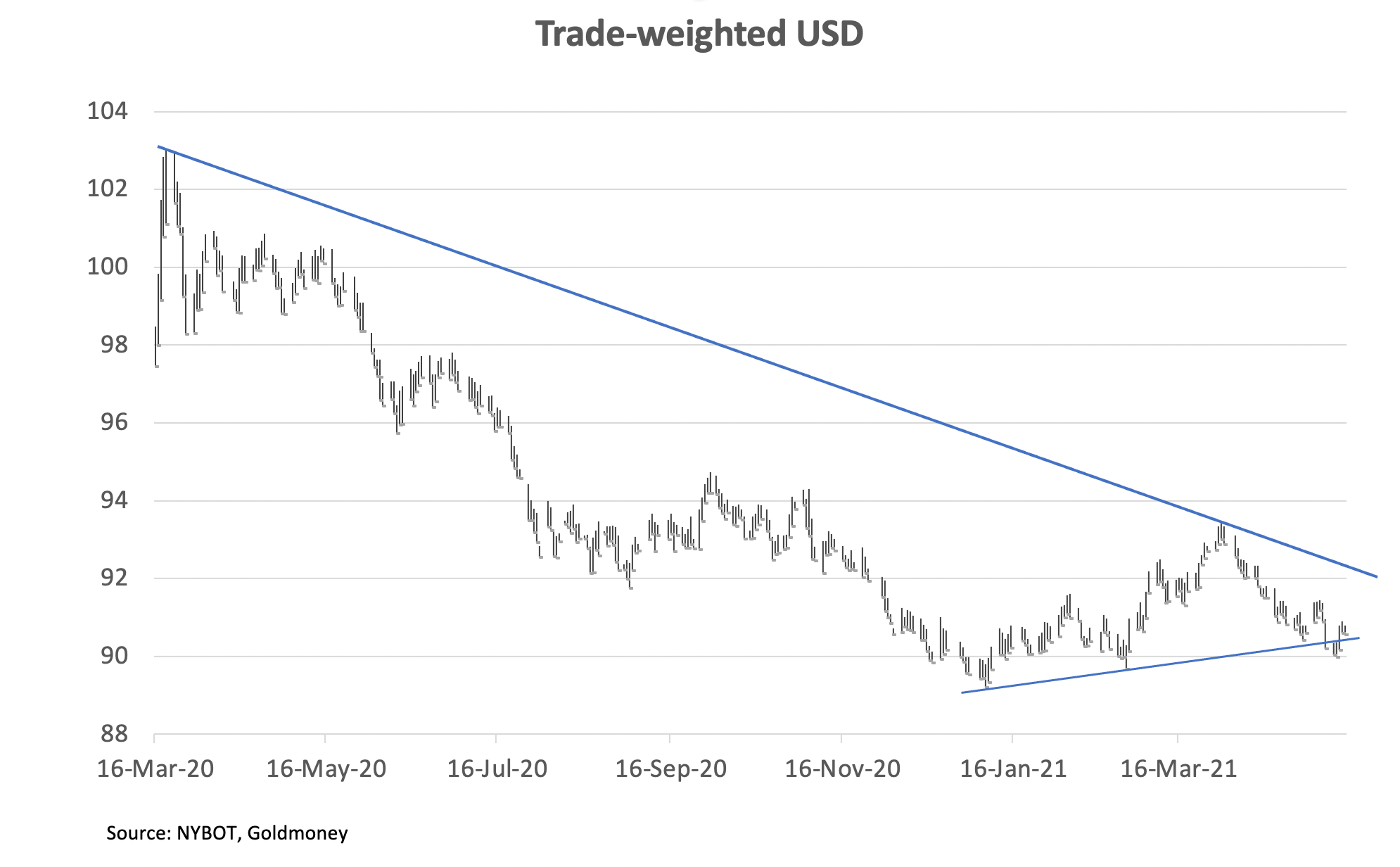 The rally of the last few days after testing the putative uptrend is understandable, but with the inflationary background and the reluctance of the Fed to raise interest rates it appears that it is only a matter of time before the TWI challenges the 6 January low of 89.2.

In short, gold and silver’s consolidation, while it may not be over yet, looks like a platform for further rises. Another factor holding gold back is that the active June contract is running off the board and the Swaps (bullion bank trading desks) will want as many call options as possible to expire worthless. Furthermore, they remain net short to the tune of $24bn. This is our next chart. 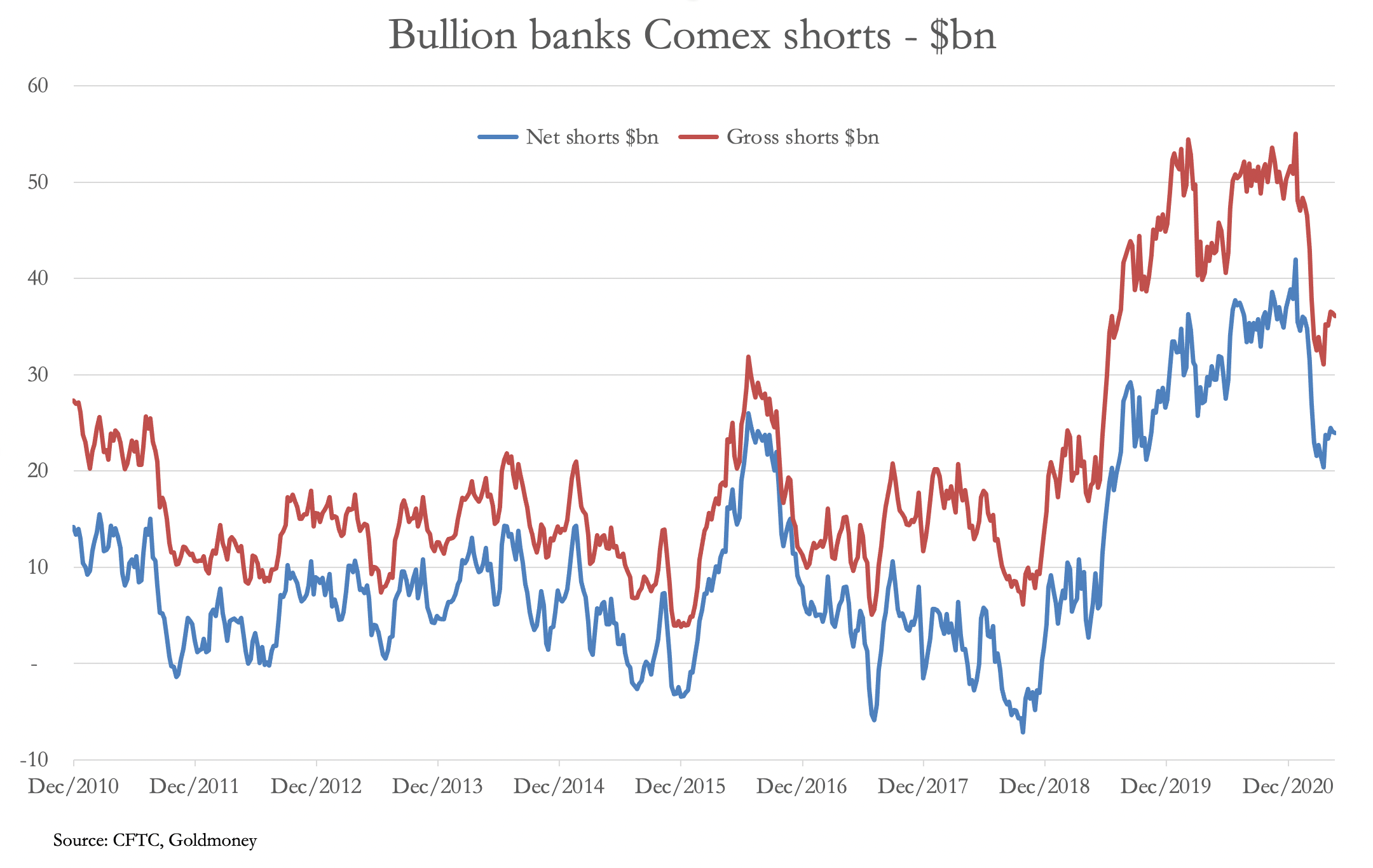 Their position will have deteriorated this week because gold’s open interest has increased sharply in heavy trading for the Comex contract. This is next. 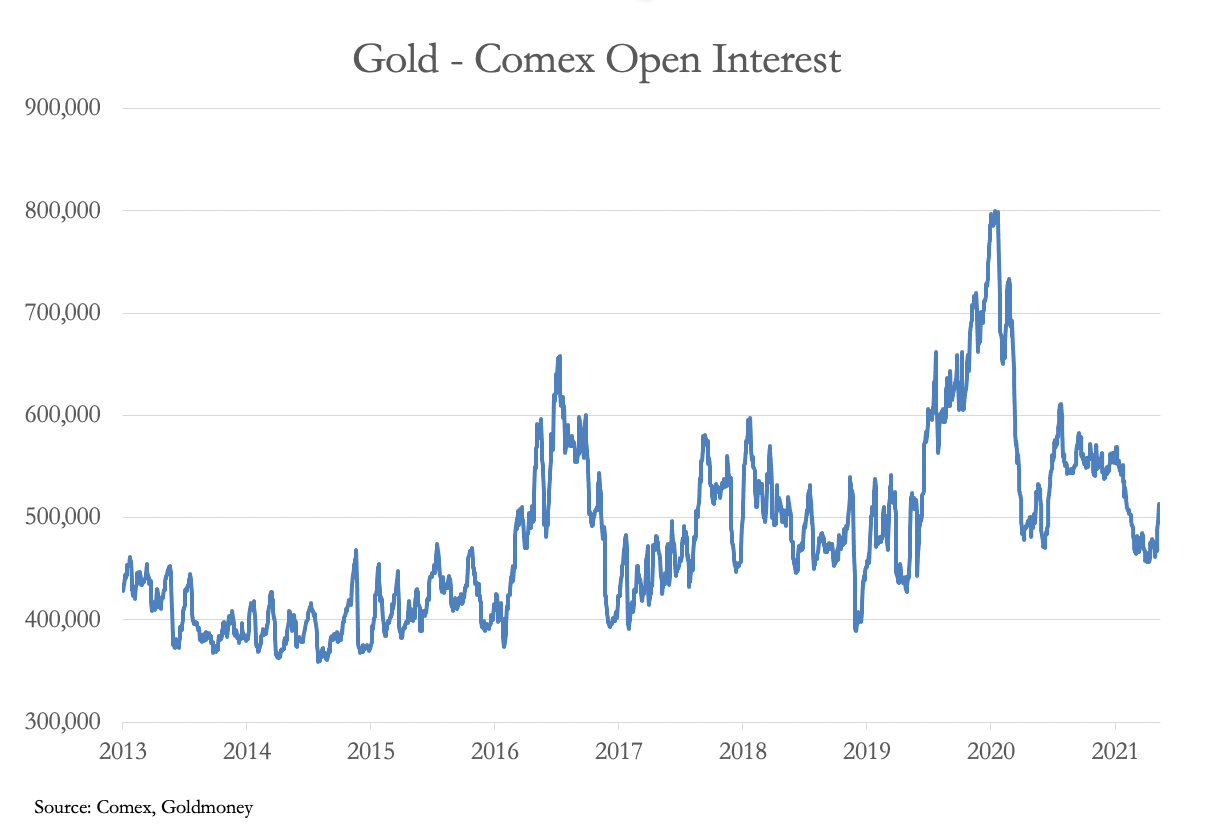 Unless it is matched by producer hedging, an increase of 45,858 contracts to 513,534 contracts last Monday in just three trading sessions materially worsened the Swap’s aggregate short position, and it was clearly in their interest to suppress the bullish resurgence. This was marked by heavy volume.

The background to the Swaps’ attempts to rein in their short position and their determination to stop the gold price from rising is the limited time they have before the Basel 3 regulations are applied to trading of unallocated metals in London’s OTC forward market. Follow this link for a detailed description of the effect of the new regulations. In short, European and Swiss bullion bank trading desks will cease business as soon as they can balance their books ahead of an end-June deadline imposed by the European Banking Authority, and all bullion bank trading desks in London will do so before the Prudential Regulation Authority imposes its deadline at the end of this year. Where these traders also trade on Comex (pretty much all of them) they will withdraw from dealing in futures as well. In short, the new Basel 3 regulations will almost certainly put the kybosh on paper gold and silver.

The effect will be to withdraw an estimated supply of $340bn of paper gold between London and Comex. Some of the demand will presumably go with it. But it seems certain that finding their accounts closed down many investors holding paper entitlements will attempt to buy bullion. In which case, based on Basel 3 alone we can expect higher prices in the months ahead.