EDITOR NOTES: With gold currently trading at nine-year highs, Wells Fargo raises its price projection by an additional $500. The article below notes critical ‘resistance’ levels, and how gold easily broke through them. The last boundary ahead for gold is its 2011 highs. Beyond that point, gold will be in record-territory once again. If you invest in gold, and if you have basic knowledge of technical levels, you should really pay attention to ‘support’ levels, as they present the strongest buying opportunities. In the near term, expect some pullback, according to Wells Fargo. But the fundamental tailwinds driving gold in the long-term remains strong. And the time to get in is still now.

"In May 2019, gold finally and definitively broke above the $1,300 per ounce resistance level—after six years of trying. In the year since that time, gold has made comparably quick work of the next major resistance levels," wrote Wells Faro investment strategy analyst Austin Pickle. "With our 2020 year- end target of $1,800-$1,900, we have been asked whether we still like gold at these levels. The short answer is a resounding, 'yes'."

"Gold has a host of drivers working in its favor, and [we] believe that gold is on its way to new highs," Pickle wrote on Monday.

However, it won't be a straight line higher in terms of future price moves. "Gold could take a breather in the short term," said Pickle.

Sustainably breaking above $1,900 an ounce will not be an easy task for gold.

"Sizeable positioning and powerful market sentiment often are anchored at milestone prices. It can take time to clear out those positions and convince market participants that conditions exist for even higher prices," Pickle explained. "In the chart below, we can see examples of this process at each of the recent major price resistance levels. The chart shows the price of gold in purple and the relevant resistance levels in orange. Notice that at each major resistance level, gold has struggled for months before decisively breaking out." 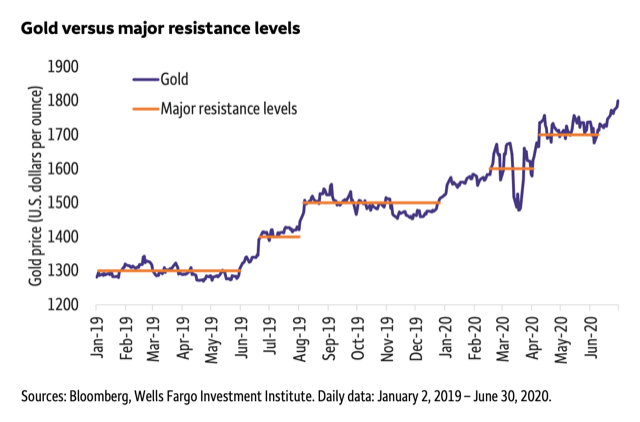 Bitcoin Magic Money: Know What You Are Investing In