Gold Is Sending A Message That Liquidity Concerns Are Back

EDITOR NOTE: The yield on the 10-year Treasury has been rising at an alarming rate since the middle of 2020. Not only does this send a strong signal of inflationary expectations, it also hampers the Fed’s ability to keep the economy in expansion mode. In order for the Fed to refinance government and private sector debt, it needs the inflation rate to rise higher than the longer-end treasury yields--in short, it needs “real yields” to go negative. And it’s almost guaranteed with today's liquidity concerns that the Fed will intervene to pressure yields downward if the market doesn’t. This is why the voices on the margins of economic commentary--all warning of hyperinflation--are growing in numbers and sounding louder. The flip side to all of this is the rare opportunity to convert wealth protection into an aggressive means of wealth expansion: the severity of the inflation to come can potentially fuel your portfolio’s growth if you invest in the right assets to counter it, namely non-CUSIP gold and silver. The alternative, of course, is to let your wealth rapidly dwindle as your purchasing power plunges over the coming years.

Recall the liquidity event observed in March of 2020. Although gold ended up dropping less than the broad markets, it was not immune under stressed liquidity conditions. Once market concerns subsided, gold rebounded sharply along with other hard assets like silver and most commodities.

This is exactly what liquidity issues are made of - forced selling of highly liquid assets to bolster cash buffers and even meet margin calls. Although markets are not in absolute turmoil as of now, gold is sending a message that liquidity concerns are back.

It’s important to remember the financial system is more leveraged today than ever before. Margin debt is at all-time highs, which amplifies liquidity concerns when they arise. Based on this backdrop of tremendous leverage in financial assets, we can expect an exaggeration of both market highs and lows.

US Treasury yields have been rising sharply as of late, due to higher inflation expectations and the presumption that government spending will remain high. It was only a matter of time before sharply rising yields created liquidity concerns given today’s highly leveraged global economic system.

Therefore, it will be crucial for investors to keep a close eye on the 10-year yield and gold. A great buying opportunity is present in the precious metals space when we consider that central banks will not allow yields to rise indefinitely. Physical precious metals and mining shares remain at bargain prices, given the macroeconomic backdrop.

The 10-year yield is sitting around 1.5% in the midst of this ongoing bond market selloff. Note in the chart below, how the 1.5% range marks a test of key previous structure: 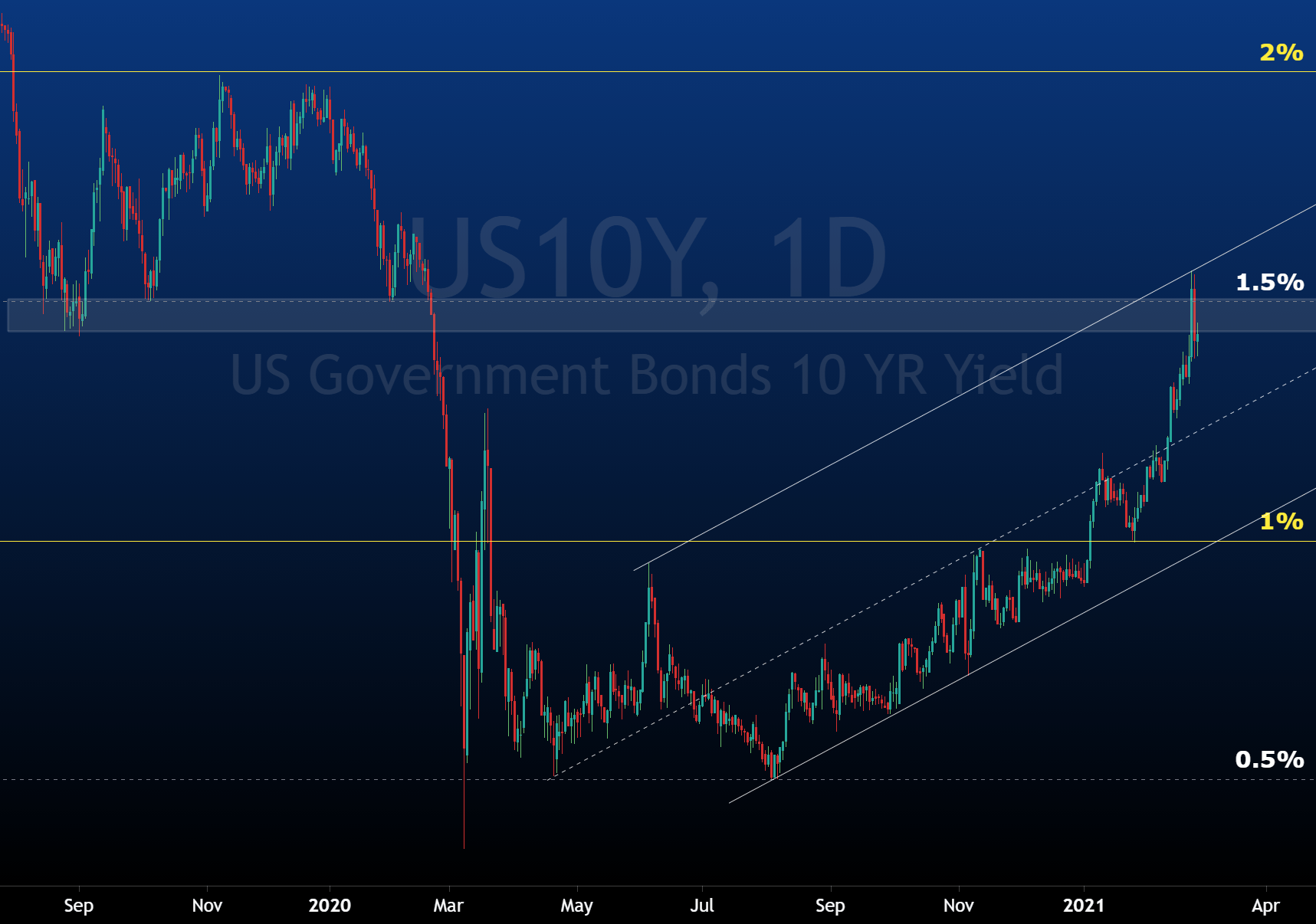 The Fed will be under pressure to act

It’s possible the 10-year yield has naturally peaked already, but we cannot be sure. If not, the Fed will be under pressure in its next meeting to intervene. Many economists, including Danielle Dimartino Booth of Quill Intelligence, are suggesting that the Fed may be forced to shift their QE purchases toward the long end of the yield curve to halt the rise in Treasury yields.

Remember, the Fed and other global central banks need to keep real interest rates negative or else the cost of refinancing government and private sector debts will be too great a burden. Their goal is to inflate away the government’s debt - requiring inflation levels to remain higher than long-term rates. Without negative real rates, it’s impossible to keep the financial economy in a constant expansion mode.

Currently, the Fed’s QE program is focused on buying the short-end of the yield curve. If indeed the FOMC decides to purchase longer duration securities, it will be de-facto implementing “yield curve controls.” This would bring the US financial system one step closer to a full “Japanification.”

Whether or not the top of the 10-year yield comes naturally or takes the FOMC action, the buying opportunity in precious metals is not one to be overlooked.

As central banks drive real rates into negative territory, gold’s case as an inflation hedge and safe-haven insurance asset is only strengthened in the long run.

Precious metals investors should be thankful for the opportunity to accumulate at prices equivalent to pre-pandemic levels - before the massive government interventions of 2020 had even taken place.