EDITOR NOTE: What happens when holders of GLD, the largest gold-backed ETF, learn that the fund doesn’t actually own any of the gold it holds, but rather, leases it all, with the hope that the float (supply) will remain liquid enough for them to lease more? As a holder, the fund would have to hedge its gold position by shorting gold futures in order to keep its risk exposure at or near zero. But what happens if more buyers jump in, triggering a potential short-squeeze? Naturally, the fund would have to “lease” more physical gold. The problem is that there isn’t enough float to go around. Same thing can be said of silver. The Perth Mint doesn’t have enough to go around. So with this crunch in liquidity and massive short positions aimed at mitigating their exposure, these funds are at risk of a major squeeze, something that’ll launch gold prices to record highs. But by the looks of things, namely inflation and resounding fears of hyperinflation, gold’s going higher regardless. What matters to any of us who want to hedge the coming cash debasement, is whether we want to enter now, while prices are relatively low, or later, when prices are near, at, or above record-high levels. To be safe, a gold substitute, like GLD, is not the smartest bet. Purchasing physical non-CUSIP gold (or silver), in short--the “real” thing--well...you can’t get any wiser than that.

Over the weekend KWN ran the viral interview Crisis Brewing In London As Gold Liquidity Dries Up – “No Liquidity At All…Whole Situation Precarious.” Well, today the metals are reacting to that crisis in London by bolting higher with the price of gold surging above $1,800 and silver breaking out above the key $28 level.

February 22 (King World News) – James Turk out of London:  Silver is attacking $28, Eric. We will see how it closes in New York today, but it is clear that two things are happening.

First, silver has been relentlessly grinding away at overhead resistance at $28, which is bullish. Sometimes markets do that as new money comes in to buy…

Although this grinding away has taken some time, it has happened while silver has been in an uptrend. As you can see on this chart of March silver, the uptrend is clear, and that’s the key message, which relates to the second point that is happening.

Silver Breaking Out Above Key $28 Level 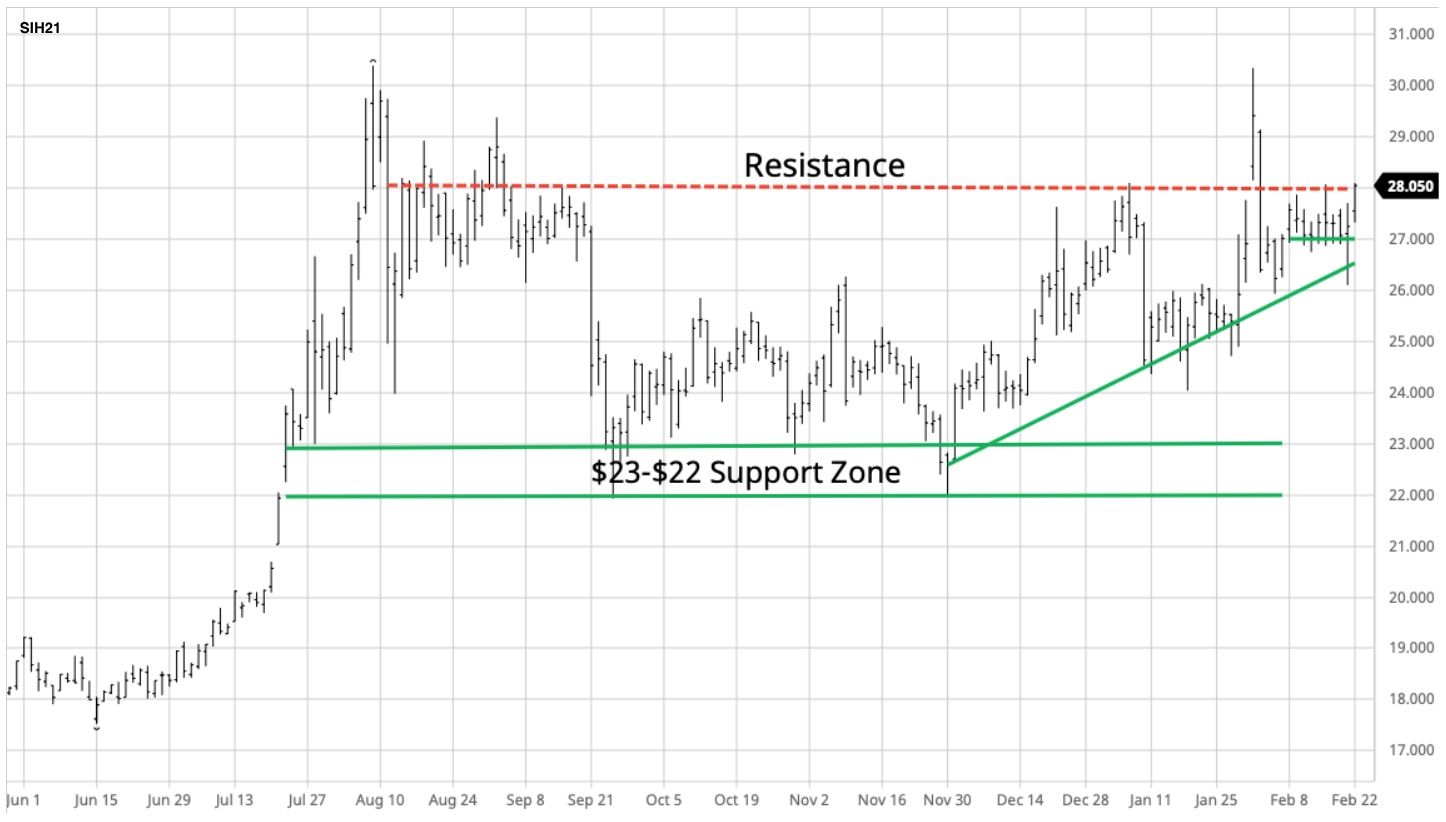 The shorts are getting squeezed. All we need is for them to finally throw in the towel, and I think that happens with silver hurdling above $28.

Let’s watch to see what happens on the close today. Let’s also watch the weight of physical silver flowing into PSLV because that will be an indication of the buying interest that silver is attracting. With commodity markets soaring, it is not surprising to see this strength today in both gold and silver. King World News note: Click on the link to read the viral interview Crisis Brewing In London As Gold Liquidity Dries Up – “No Liquidity At All…Whole Situation Precarious.”