EDITOR NOTE: There are very few people who are 100% invested in gold and gold stocks. Ed Steer, who authors the Gold and Silver Digest, is one of them. In this interview, we get to hear from the perspective of one investor who has zero hedge in the gold market; someone who is “all in” the yellow metal and its miners. Ed is expecting a major thing to take place, this one having mostly to do with banks and gold manipulation. And it's compelling enough for him to take on an exposure level that even the most seasoned precious metals investors would never dream of doing. Of course, he sees big profit potential in the end. It’s an interesting strategy; one that’s sure to interest any investor serious about gold.

“While multiple indictments have been handed down against JPMorgan precious metals traders since last year by the Justice Department, charging some of the traders with RICO (Racketeer Influenced and Corrupt Organizations Act) crimes, the bank itself has yet to be charged.”

“As expected, JP Morgan has just agreed to pay $920 million in fines – a record penalty for allegations of systematic market manipulation – as part of a deferred prosecution agreement with federal prosecutors…bringing to a close a years-long investigation into “spoofing” and other market manipulation tactics in the precious metals and Treasury markets.”

Their follow-up article, Meet The Mastermind Behind JPMorgan’s Gold And Silver Manipulation “Crime Ring” outlines the ugly details. A couple comments brought back some memories:

“There was a time when the merest mention of gold manipulation in “reputable” media was enough to have one branded a perpetual conspiracy theorist with a tinfoil farm out back.

Yet now all the “tinfoil” conspiracy theories involving the JPMorgan commodity trading desk have been confirmed, the bank is set to pay $1 billion to settle all ongoing legal cases (and is yet another reason why CEO Jamie Dimon is richer than you)….”

I met Ed Steer 12 years ago and consider him a good friend. He writes a daily letter, Ed Steer’s Gold and Silver Digest, and works closely with the Gold Anti-Trust Action Committee. His column is a must-read every morning.

When I began reading his daily analysis, he put forth compelling evidence that something unnatural was going on in the precious metals markets. He was considered by some to be part of the “tin hat” crowd. He never wavered, believing what he saw in the charts and graphs he presented.

As this unfolded, I contacted him. I’ve had readers ask about why they should invest in gold and silver if the market is manipulated. Now UBS is saying “buy gold”. Ed is the expert, time to hear from him.

DENNIS: Thanks for taking your time for our readers’ benefit. While you were right, you haven’t been hammering, “I told you so.” I commend you for that.

What I want to focus on today is what this means, and investment implications.

Ed, I think Scotiabank, Ex-Deutsche Bank have also been charged. Have any others been charged? I would think being charged under the RICO act is pretty serious.

ED: It is, but it’s obvious the bank wasn’t charged – and wouldn’t be charged, because as silver analyst Ted Butler correctly pointed out, that would put them out of business.

It may be a different story for the individual traders that have been charged, or are already waiting for sentencing. They may end up being the fall guys for Jamie Dimon and the firm as a whole.

We’ll have to wait and see on that one.

DENNIS: It’s amazing that Jamie Dimon is still running JPMorgan. While the bank rips off the public illegally, he has been well rewarded for doing so. A recent Wall Street On Parade article addresses my concern:

“For years we’ve been trying to figure out why JPMorgan’s Board of Directors hasn’t sacked its Chairman and CEO, Jamie Dimon, as the bank racked up two felony counts in 2014 for its failure to alert U.S. regulators to glaring red flags in the bank account it held for Bernie Madoff’s Ponzi scheme; one felony count in 2015 for rigging foreign exchange markets; and two more felony counts just last month for rigging the precious metals and U.S. Treasury market. (The bank admitted to all five counts.) ….

The JPMorgan Chase Board of Directors has a stunning number of incestuous conflicts of interest, few of which have not been properly spelled out to shareholders.”

The details are maddening, and the government looks the other way.

ED: As you know, Ted has been writing about this for years, and many told us we were wearing tinfoil hats. At least with the fines and admissions, it is out in the open. But somehow, Dimon manages to keep his job – and I’m not sure whether that’s because they’re afraid to confront him…or whether the board members are birds of a feather. The article makes it sound like the latter.

“…. Bullion Bank price manipulation in the precious metals has been going on for decades. And don’t think for a second that a few fines and convictions will suddenly bring all of this to an end. There’s too much easy money involved for a banker to simply walk away.

ED: The only bank that’s made oodles of money on this price management scheme is JPMorgan. Ted Butler says they are no longer short in the COMEX futures market in either silver or gold – and are sitting on monstrous stockpiles of physical gold and silver. The Big 8 shorts in both precious metals have suffered huge realized and unrealized losses totaling around $14.5 billion to date according to Ted…many, many billions more than they ever made in profits since it all began. So to say the banks have made “too much easy money” according to Mr. Hemke is not quite accurate.

UBS has it right; “buy gold” – and I’ll add “buy silver” to that recommendations as well.

DENNIS: What I find maddening is the banks have been fined, but the investors who have been hurt are not being compensated. I put silver and gold in my grandchildren’s college fund. They have done OK, but we will never know what they would have done in a free market.

Will mining companies and investors ever be able to recover some of their losses? If so, how?

ED: No, Ted says that spoofing is a hard crime to collect to litigate against – and individual investors and mining companies would be wasting their time. Eric Sprott of Sprott Asset Management fame recently said the same thing on the record – and one can imagine just how much money he – and other billionaires like him have lost over the last decade or so.

DENNIS: Despite market manipulation by the big banks, John Williams of Shadowstats shows us that gold has outperformed the stock market since 2000. 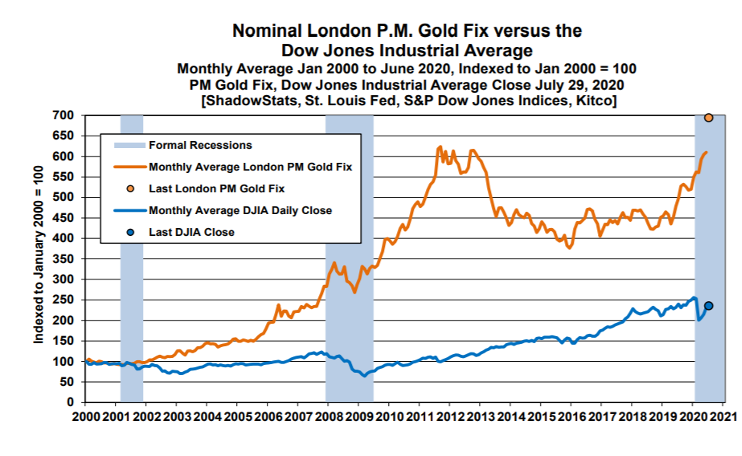 The last time I checked, gold and silver were the top two performing asset classes of the year.

Do you agree with UBS when they encourage investors to buy gold?

ED: As I, UBS and so many others have stated, the precious metals and their associated equities will do exceptionally well when this price management scheme takes its last breath…and it will at some point. But we just don’t know what day that will be. Unlimited money printing and U.S. dollar debasement have certainly happened in the last year or so.

DENNIS: One of the most frequent questions I get is, how much gold/silver should I own? Retirees need income to pay the bills. The tradeoff between that and physical metal which doesn’t produce income is a challenge. Many are very concerned about inflation; particularly with the Fed’s new “average inflation” target.

What are your thoughts? Do you recommend a portion in metals stocks that produce dividends?

ED: I’m 100 percent invested in the precious metals and their equities, which I certainly don’t recommend to anyone. But if I’m going to talk the talk, I better walk the walk as well.

Retirees should invest as much as they feel comfortable within the precious metals – and no more…whatever that percentage might be. I know some people also invest in stocks because they like the dividend income, which is certainly OK. When the precious metal miners start making some serious profits, hefty dividends will flow from them as well – and that’s already started.

DENNIS: One final question. I’m not selling any of my metals or metals stocks. At the same time, the big banks are criminal enterprises manipulating the metals, currency and bond markets for sure. Congress and the press seem to ignore the problem.

What will it take for this crap to stop?

ED: Dennis, thanks for the opportunity to address your readers.

When JPMorgan decides or is instructed to stand aside, or when the Big 8 rush to cover their short positions, then we’ll see daily price increases in the precious metals that will make your eyes water. It’s my personal opinion that this day is close at hand – and the fallout from the upcoming Presidential election next month could be the trigger that sets it off

Dennis here. I agree with Ed. We can’t let the corrupt banks prevent us from protecting our life savings. I really hope we don’t have to sell our core holdings in my lifetime.