EDITOR NOTES: The Fed is reacting to this situation by working to create hyperinflation because it finds it preferable to a deflationary implosion. There are two reasons for this – one is that it enables it to continue to fulfill its time honored role, which is to transfer wealth from the rest of society to the 1%, and the other is it defers complete systemic collapse for a little longer.

Historical Gold charts show that over the past 2 years that gold is definitely in a bullmarket. In fact when looking further back ove the long term chart, it appears that gold is getting ready to break above the 2011 highs. There is a big gap between the paper price of gold and the prices for physical metal, which is getting harder to obtain... and may drive the prices higher. This is viewed by many as a very positive sign.

If you are interested in buying physical metal, like gold or silver this may be a good time to act.

The deflation and depression is right here, right now, and if you don’t believe that, try asking some of the 30 million people who just lost their jobs in the US or those who (used to) work in the catering and tourism industries.

The Fed is reacting to this situation by working to create hyperinflation because it finds it preferable to a deflationary implosion. There are two reasons for this – one is that it enables it to continue to fulfill its time-honored role, which is to transfer wealth from the rest of society to the 1%, and the other is it defers complete systemic collapse for a little longer. The Fed has created a staggering amount of new money since this crisis started a few months ago to feed the debt monster and its balance sheet has gone exponential and is expanding vertically, guaranteeing hyperinflation, which will begin the moment the velocity of money starts to pick up – currently there is no velocity of money because the economy is DEAD, but if you print enough money to throw at it as in countless trillions, you can get things moving again.

At the risk of sounding old fashioned, I want to point out here, for the benefit of those who perhaps have a hard time understanding certain basic truths, that creating more money does not actually create wealth – if you say triple the amount of money, all that happens is that you have 3 times the amount of money competing for the same or a reduced quantity of goods and services, which inevitably drives prices up, hence the trend to hyperinflation.

The manic money creation by the Fed has already driven stocks back up so that they have recovered most of their losses triggered by the virus scare, and they will keep on pumping until they get things moving again, in order to banish the specter of deflation, but no matter how much they create to satisfy the immediate cravings of the debt monster, it will never be enough, and it will continue to threaten to jack up rates unless it is fed ever greater quantities of cash. Money creation has already gone into the vertical blowoff phase and the quantity of money will continue to grow at an accelerating rate until it becomes worthless.

Thus it is no surprise that gold is starting to power up for an advance that will take it to the stratosphere, or more likely the moon. Silver hasn’t “got the memo” yet, or maybe it did just last Friday, judging from its price action.

One of the key points to understand is that this crisis will not end until all the gargantuan debts that have built up, and associated derivative positions are written off as worthless. Corporate debt, government debt, municipal debt, junk bonds, and all bonds right up to Treasuries are intrinsically worthless and are going to be forcibly marked to market by one of two methods, default or hyperinflation – as in “Here’s your money back – oh, I’m awfully sorry, it’s now worthless.” If you own any of this garbage you should move swiftly and resolutely to get rid of it, before its value declines to a big fat “0”. The crisis cannot end until the overhang of this atrophying sludge, which is like a huge ball and chain hanging around the neck of the world economy, is eliminated – the creditors will end up with nothing. One of the main reasons for the recent huge money creation by the Fed is to backstop the credit markets in order to stop rates rising which would cause debt to compound at a catastrophic rate, however, they seem to be alright with the idea of eliminating the debts by taking the hyperinflationary route.

The Fed is to other Central Banks around the world what the Corleone family was to the Mafia in the Godfather series, which is to say that they had better follow the Fed line unless they want to get “wasted”. Thus we can expect them to engage in the same manic money creation.

With fiat around the world now heading at an ever rapid rate towards its intrinsic value of 0, the choices for those wanting to preserve their wealth are rapidly narrowing down towards just two things, gold, which is real money, and silver. While various scarce collectibles like old cars and paintings hold their value and increase in price during periods of high inflation, they are not a very practical means of exchange. You cannot imagine wandering around a street market with a painting and stopping at a stall and saying “I’ll swap this old Rembrandt for that cabbage and a couple of parsnips” and that’s assuming that you get that far without being mugged. Gold and silver are more transportable and more practical, silver especially for more minor transactions, which makes its recent poor performance relative to gold somewhat puzzling – not that we are complaining since it is giving us more time to load up before it does take off. With respect to silver’s relatively rotten performance compared to gold in the recent past, this is a good point at which to draw your attention to an excellent article by Jeff Clark on the subject entitled Why is Silver Stagnant and When it Start Moving? I’m sure you will agree that this is most encouraging article for silver investors.

A reason why we have been rather “backward with coming forward” to make investments in the Precious Metals sector in the recent past was the serious risk that markets would tip into another severe bear market down wave, but this danger is now believed to be passing due to relentless and massive money pumping by the Fed designed to backstop the credit markets and pump the stock market, especially the darling FAANG stocks, that are now “organs of the State”. We can see on gold’s latest 6-month chart that the recent pattern could have been a top following its arrival at a trendline target, but now it is looking increasingly like a bull Pennant. 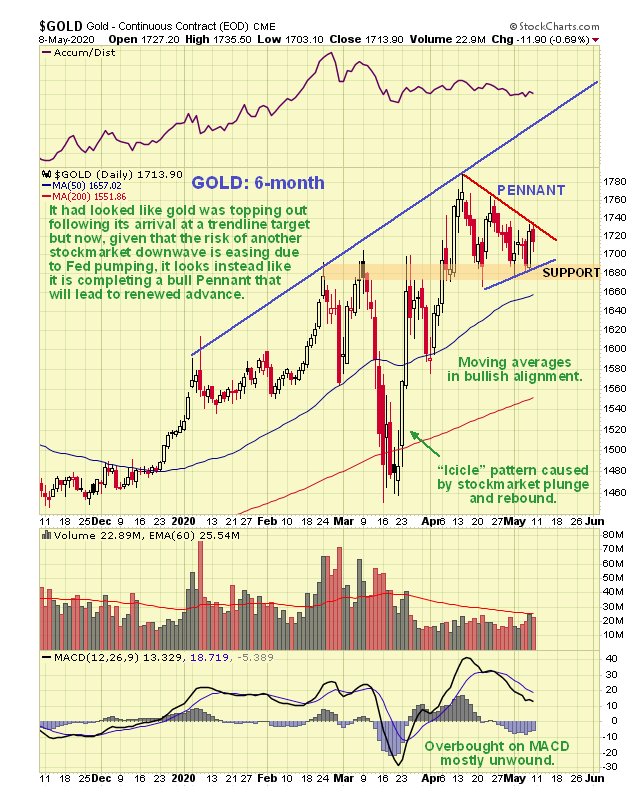 On the 2-year chart we can see that gold is definitely in a bullmarket. There are a couple of interesting points to observe on this chart. One is that the quite strong advance in the middle of last year broke gold out of the multi-year base pattern that we can see on the 10-year chart lower down the page. Another is that the action into mid-March this year demonstrates that if the stock market crashes it will take gold down with it, although as set out about, rampant Fed pumping is greatly reducing this risk. Although it looks like gold could further medium-term on this chart, we can equally see that the rate of rise could now accelerate, especially the accelerating rate of money creation. 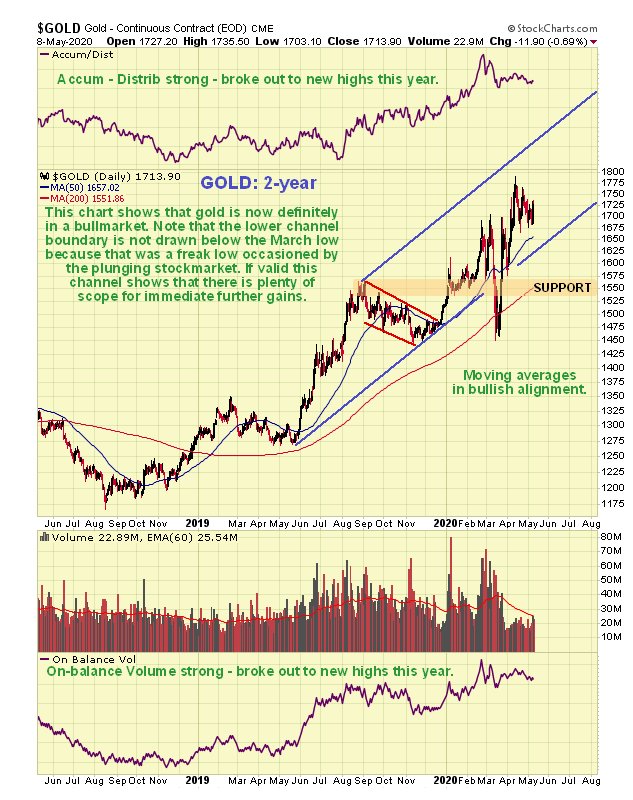 On the long-term 13-year chart we can see the big Bowl base pattern that formed between 2013 and last year, and how, following last year’s breakout above the upper boundary of this pattern it is forging ahead in readiness for a breakout to new highs, and of course gold has already broken out to new highs against most major currencies. A strongly bullish point to observe that bodes well for the future is the strong upside volume driving the advance that has taken both volume indicators shown to new highs. 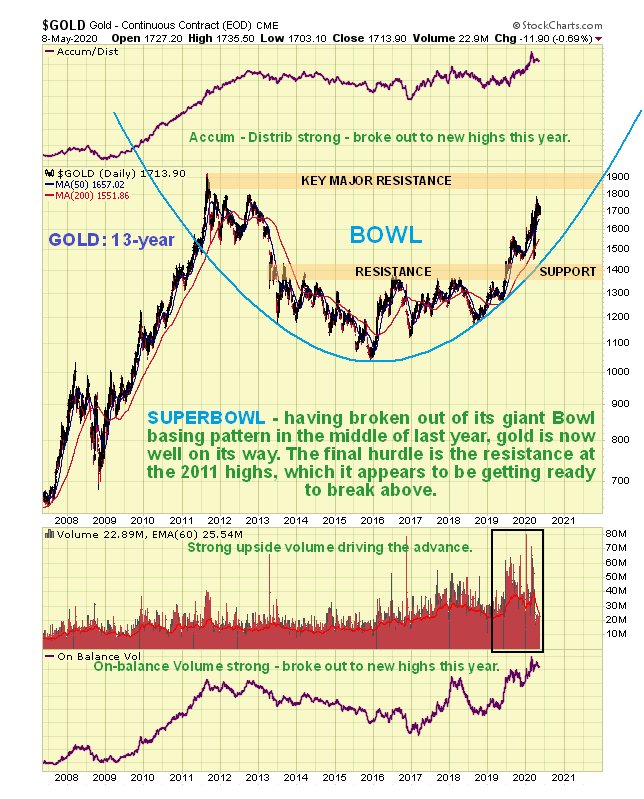 Gold’s latest COT shows readings in middling ground – not low enough to be decidedly bullish, but not high enough to preclude further advance. This is in marked contrast to silver’s latest COT, which looks much more positive. 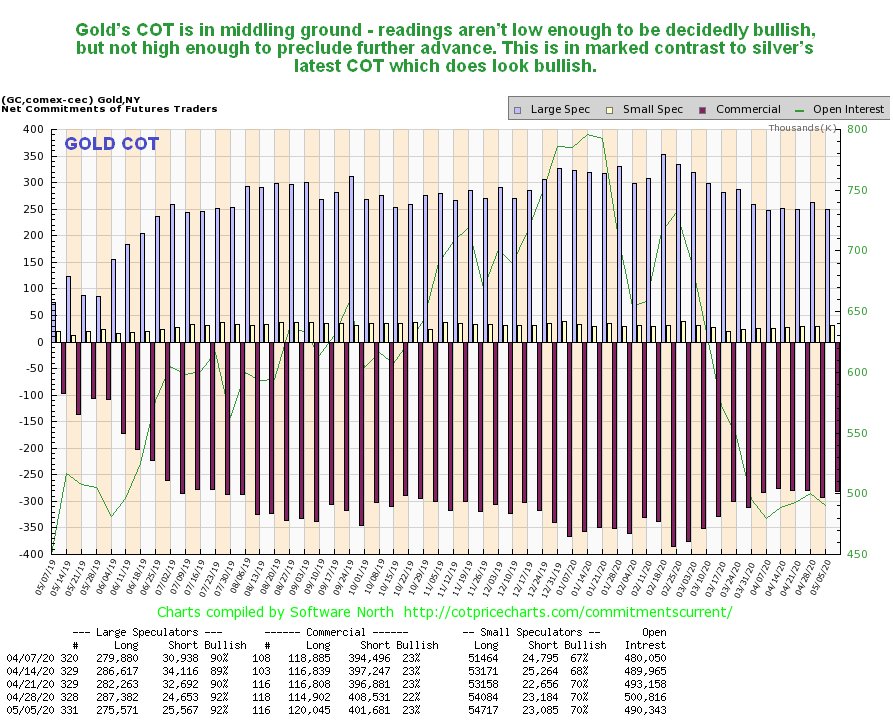 A final point worth making relates to the now big gap between the paper price of gold and the prices for physical metal, which is becoming increasingly hard to obtain. This is viewed as a very positive sign, and it is hardly surprising considering what is going on in the world. If you are interested in buying physical metal you should not less this put you off, because the gap is likely to widen much more as the price advances before physical metal becomes unobtainable except at very high prices.

The History Of Modern Banking As We Know It

The Global Race For Currency Debasement