EDITOR NOTE: As stimulus benefits for the unemployed expire, and as a wave of evictions is set to spike, American consumers are suddenly a bit more uncertain about their spending, and analysts from Goldman Sachs are taking note--offering economic guidance in the form of a steep drop and deceleration through 2022. Whether we see a delta lockdown or not, workers are likely not to return to their offices anytime soon, and for some, perhaps it's permanent, as the hybrid workspace may define the new era of corporate culture. This creates a lag in the services sector; interestingly, enough for Goldman's economists to offer a GDP downgrade in its forecast of the US economy.

It was good while it lasted, but the party is finally ending.

One day after we reported that unemployed households which no longer receive emergency benefits are suddenly spending far less, and on the same day we read about an "unprecedented spike" in evictions as foreclosure moratoriums end, the only thing missing was a sellside downgrade to the US economy. Well, we got just that early this morning, when Goldman - which last year was the first bank to unveil materially above consensus GDP projections - cut its 2021 second half consumption growth forecast, resulting in 1% downgrade to its GDP growth forecasts for Q3 and Q4 to +8.5% and +5.0%, respectively, "as it is becoming apparent that the service sector recovery in the US is unlikely to be as robust as the bank had expected. Which is odd considering the trillions in monetary and fiscal stimulus that have entered into the economy. One wonder how many more trillions would be needed for Goldman to be happy.

But while Goldman's expected 2021 slowdown is manageable, it gets far worse in 2022, when the sluggishness is expected to truly hammer the growth rate, which Goldman now expected to shrink to a trend-like 1.5% - 2% by the second half of 2022, a far "sharper deceleration than consensus expects." 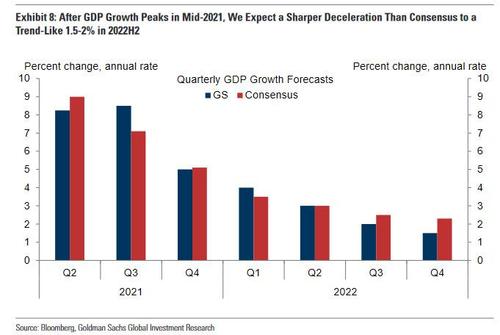 First, and as noted above, he service sector is not rebounding as sharply as the bank had expected. And rising cases of the virus suggest momentum will slow.  A complete service sector recovery will likely require fully overcoming virus fears and returning to office work patterns. Both now appear likely to take longer than the bank's economists anticipated. 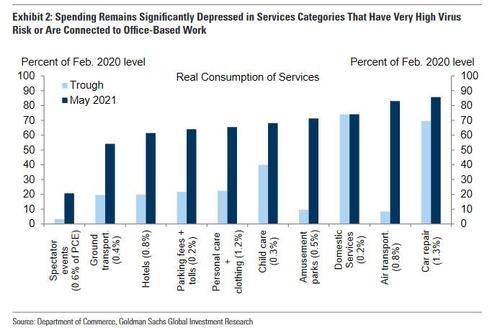 Second, return-to-office has been "particularly disappointing", suggesting a prolonged delay in the office-adjacent economy. 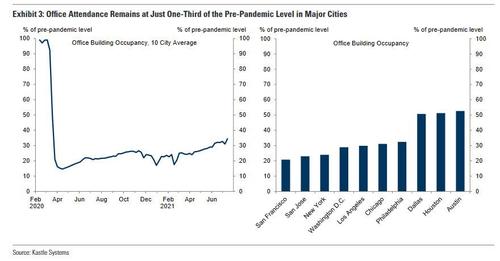 Office attendance in large cities is still just one-third of the pre-pandemic level, and surveys indicate that both workers and employers expect work from home to remain much more common than before the pandemic. 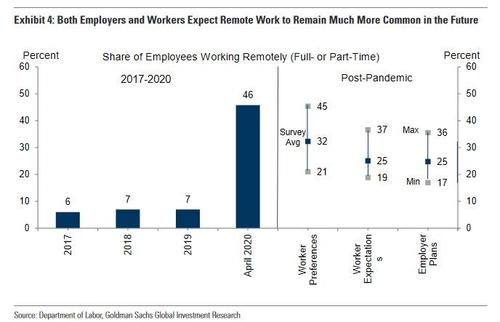 Job advertisements provide further evidence that remote work is likely to persist. Usingdata on individual job listings and descriptions from LinkUp, we estimate that over 7%of new jobs listed in June offered remote working options (Exhibit 5), well above thepre-pandemic norm of roughly 1%. 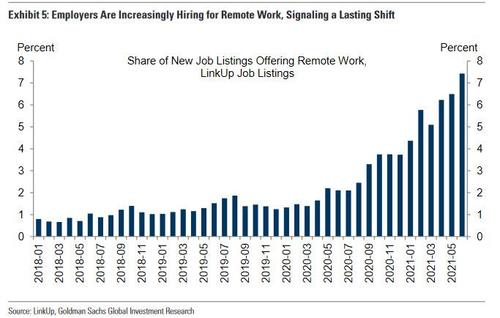 As Goldman notes, "greater remote work is likely to delay the recovery of the office-adjacent economy, which implies a lower level of services spending in the near term. Workers who commute to an office, for example, might consume transportation services to and from the office, restaurant meals during lunch, work-appropriate apparel and dry cleaning services, and other goods and services they pass by during their time away from home. Remote workers need to eat too, of course, and they might be as or more content preparing their own meals or wearing casual clothing at home, but in the eyes of the GDP statistics, this new arrangement is likely to mean less market-transacted economic activity."

As an example of this, the next chart shows that food services employment remains substantially lower in the cities that have been slower to return to the office, and this remains true even if one controls for state-level virus restrictions, the local share of office employment, or the current level of overall local consumer spending. In the case of food services, former office workers could reallocate some or all of their office lunch budget to food services near their homes, but for some office-adjacent services, such as transportation services used for commuting, there are not substitutes. 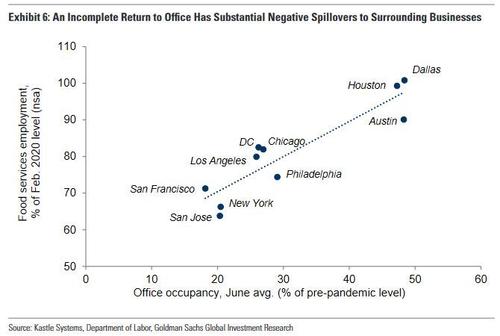 Corresponding to the downgrade to its GDP growth forecast, Goldman has also bumped up its unemployment rate forecast slightly from 4.2% to 4.4% at end-2021, although the bank caveats that it expects to "learn considerably more about the prospects for labor market recovery from the July employment report, which should provide a test of the impact of seasonal adjustment irregularities and the early expiration of federal unemployment benefits in some states."

Bottom-line: after maintaining a growth outlook well above consensus for much of the pandemic, Goldman's economists now forecast a steeper slowdown in activity, and expect growth to slow further to a trend-like 1.5-2% by 2022 H2, "a sharper deceleration than consensus expects." And since virtually everyone on Wall Street waits for Goldman to take the lead with every notable inflection call, brace for a barrage of GDP downgrades in the coming days as the sellside consensus suddenly starts clamoring for even more cowbell stimulus, which only another widespread delta lockdown can bring.